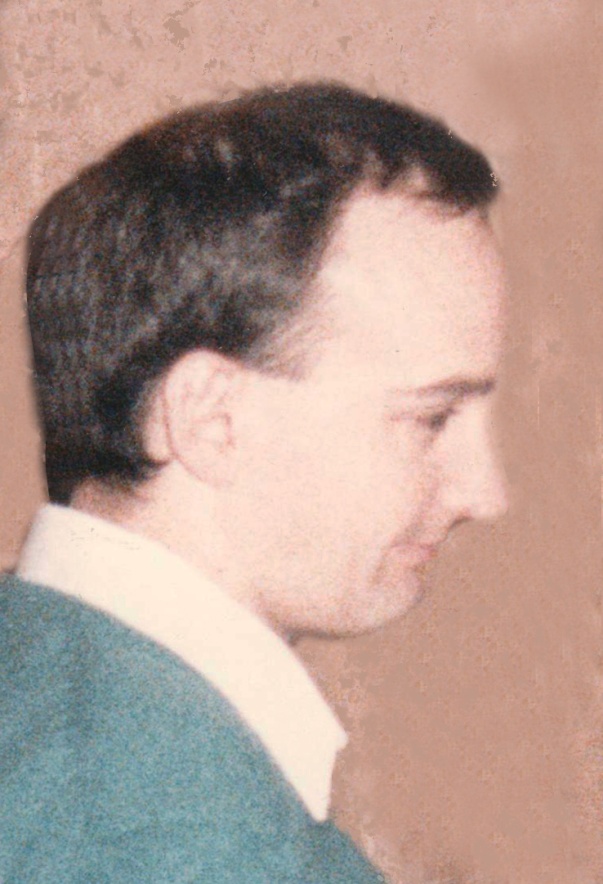 Photo of Steve LeBlanc taken about the time he was drawing Tony Bravado. 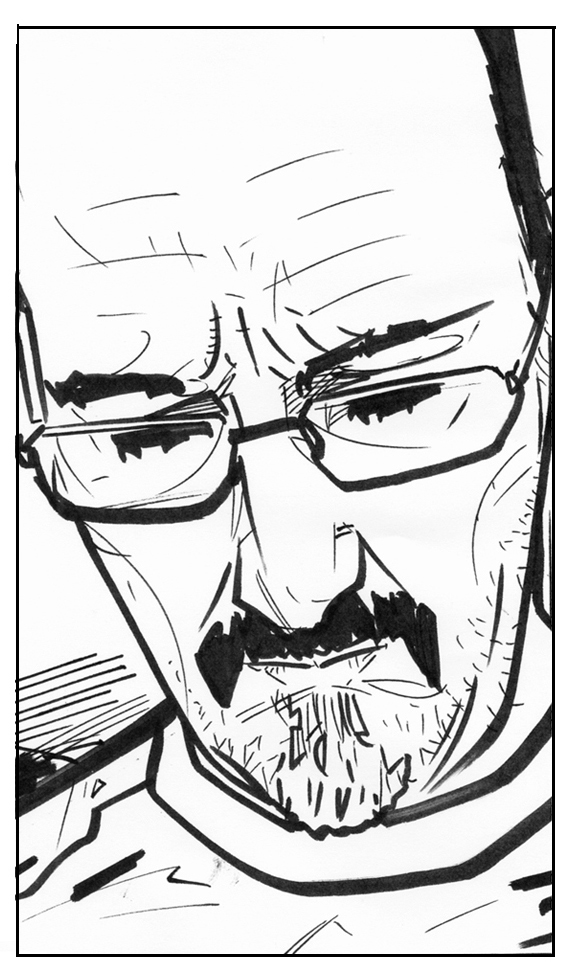 A portrait of Steve drawn by R.G. Taylor about the time they were collaborating on “167”.

I came to comics late for most young boys….I was unable to pursue this medium  for economic reasons. Instead I turned to the local library … it was there I first encountered the prose of Robert Louis Stevenson. With the added bonus of the books being illustrated by N.C. Wyeth my heroes became people like Jim Hawkins from Treasure Island and Dick Shelton in The Black Arrow. …

Steve LeBlanc was born January 30, 1956 in Berwick Nova Scotia and at the age of six years moved to Toronto where he still lives with his wife and two children.

After High School he studied in the cartooning program in Sheridan College in Oakville from 1975 to 1977 and then studied painting from 1980 to 1989 with Michael John Angel who was one of North America’s foremost figure painters in the classical tradition. He was also Director of the National Portrait Gallery in Toronto 1982 to 1988, then Assistant Director of the Florence Academy of Art in Italy 1992 to 1995. During this time Steve established a career in graphic arts with some commercial illustration. He has also done a number of portrait and landscape commissions.

It was in the 1980’s that, he branched out into graphic stories, creating adventure cartoons with Dave Darrigo and James Waley. Steve was introduced to Dave, “a writer looking to work with some artists”, through Nick Poliwko a Sheridan College friend of Steve’s. Both Poliwko and LeBlanc were working at the Auto Trader newspaper. LeBlanc had been cartooning his own stories but he liked the idea of working with a writer “and Dave seemed like a nice guy.” What Dave liked about Steve was that in an industry dominated by artists wanting to do superheroes Steve preferred un-costumed un-mutated humans.

They formed a partnership and in 1985 and worked on two graphic stories, “The Reformed Five” about and group of ex-cons fighting crime and “The Nazi Streets”: the story of a Jewish vigilante in prewar Nazi Germany,. The latter was to appear in Tour de Force but the backers for Tour de Force faded away and “Nazi Streets” faded away with them. However, the Darrigo/LeBlanc team produced one story “Blitzbusters” which appeared in Gideon Steinberg’s Canadian Cavalcade. In addition Steve drew pulp pinups for Dave and these appeared in Wordsmith numbers 2 (October 1985 and 3 (December 1985).

In 1986 Dave asked Steve if he would be interested in a character “Tony Bravado that Dave had created. Steve was very interested and created a “Tony Bravado” that was an amalgam of different Italians that he knew. He did a couple of poster pieces “that didn’t thrill Deni Loubert too much and in retrospect she was probably right.” After a long and frustrating search for an illustrator Darrigo and Loubert finally settled on a team composed of Steve doing pencils and a Québec artist Louis Paradis inking. In the process of getting to know each other, Steve and Louis did a story “The Falling of the Sun”, Steve writing and doing pencils, Louis inking. It appeared in 1987 in Mark Innes’ mini comic Wavemakers no. 4.

The publishing history of this character was one of starts and hesitations as Renegade Press and later Special Studio ran into difficulties with the collapse of the black and white market. Suffice here to say that over issues 1 and 2 Steve became increasingly dissatisfied with Lois’ inking and wanted another inker. However, on reflection Steve later (2010) had this to say, “Looking back at the book, I realize Louis wasn’t the problem, it was more me trying to find my way.” As it worked out Tony Bravado was delayed so many times that Steve wound up inking issues 3 and 4 himself before the periodical was cancelled.

The year 1991 was a busy one for Steve. He and Dave ( using the pseudonym George Stryker) teamed up to do “Knight of Justice” for Black Scorpion no. 1 a Special Studio publication. About this time Steve also became involved in a team that produced “Ali-Baba: Scourge of the Desert”. This involved Jim Waley, another Sheridan College graduate and founder of Orb, Dave Darrigo, Steve LeBlanc and Ron Kasman fleshing out a story originated by Dave Sim creator of “Cerebus the Aardvark”. It later appeared under the title Ali-Baba Scourge of the Desert published by Gauntlet Comics a division of Caliber Press in the U.S. Two issues were published but issue 3 which would have completed the story never appeared. LeBlanc also began a story about a barnstorming pilot in the 1920’s called “Johnny Tempest”. He finished eight pages but by this time Special Studio had ceased operations. One last project was to ink an eight page story for Nick Poliwko for Good Girl Comics no. 18 published by AC Comics out of Florida.

The many still born projects left Steve disillusioned with the comic book business he spent the next ten years painting and making frequent trips to Italy to see the best of Renaissance art. During these visits he would at times drop in on Angel in Florence.

In 2004 he returned to graphic storytelling realizing that he missed the genre. He produced a graphic story in four parts called Hogtown Jaz: The Perfect Fall Guy which was edited by his former associate Dave Darrigo. It is about an ex-Montreal cop and what happens to him when he moves to Toronto. The story has appeared both in print and online. This story was followed by Turista Menu a book of short stories set in Italy. The first story “Code Name: Pearl – A-Riva-Derci” introduces us to a female agent who returns in “Red Star Conspiracy” in Drama Drama, a periodical. The second story is about a woman movie star called “Honey” which is also the name of the story. He founded his own company Via Di Malcontenti to publish these works..

After “ “Pearl: What’s All The Hullabaoo” Drama Drama 7, in 2016, Steven detoured into contract work. He pencilled 24 pages of Larry Blamire’s digital comic Steam Wars, 2  which was inked and coloured by Nick Poliwko. He  illustrated a 15 page story written by Antonio Solinas for the anthology Stazione 31 published by Passenger Press in Italy. “Jack e Rodolfo” is a surrealistic story about a passing meeting between Jack Kirby and Santos a Mexican wrestler at a train station. He picked up on the vampire novel called Bloodlust written by Roger Slifer & Bryan Sullivan after Will Meugniot did the first thirty pages. Steven did the next 142. As of January 2019 it had not been published.

In 2018, Steven returned to finish “Pearl: What’s All The Hullabaoo” in Drama Drama 7. In addition he illustrated an 8 page science fiction story written by Mark Shainblum. This story may be part 1 of a new serial.

The ongoing adventures of “Pearl” and “Honey” can be seen on Steve’s Website www.steveleblanc.ca.

The Island of Lost Dreams. Via di Malcontenti, 2013. 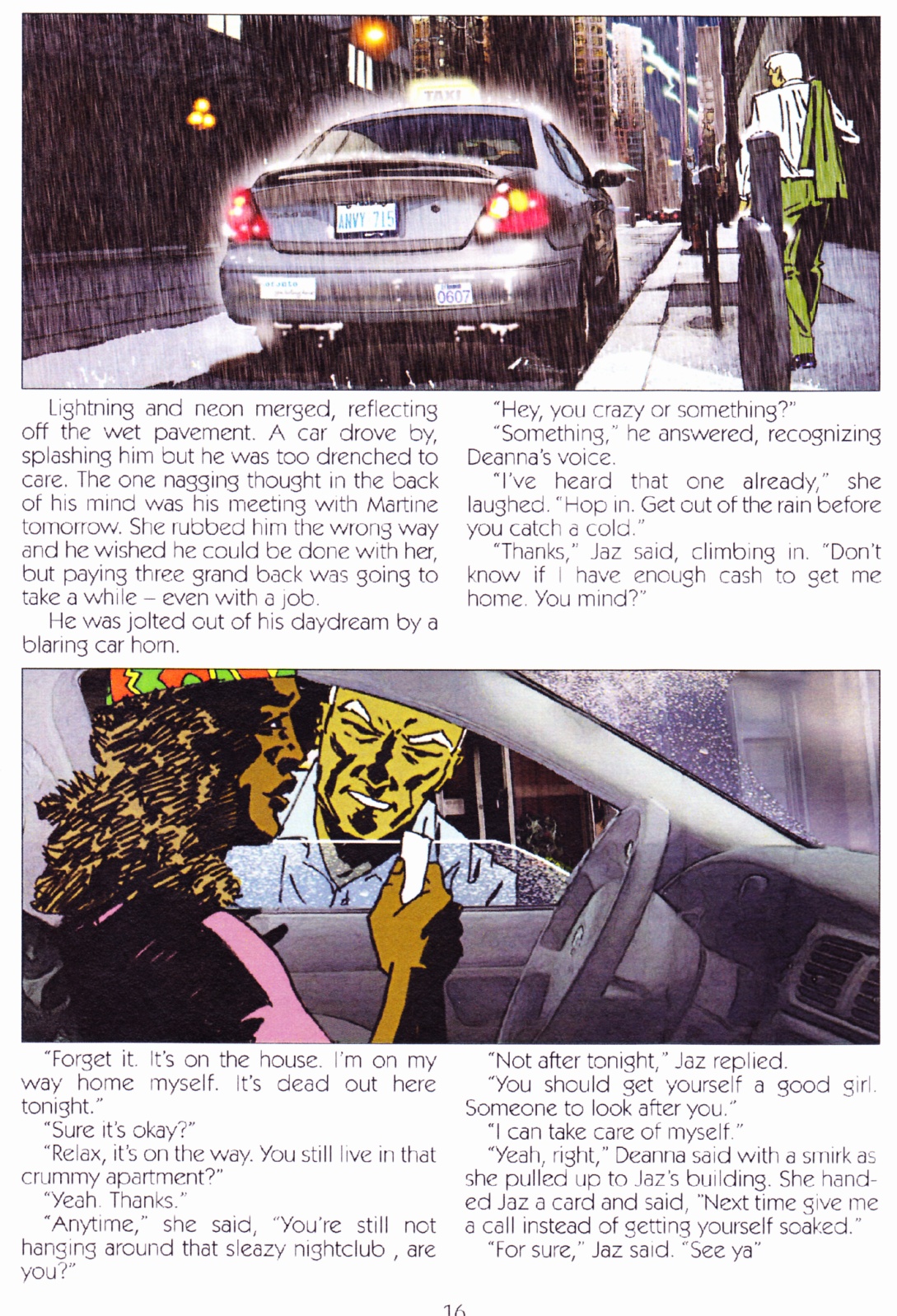 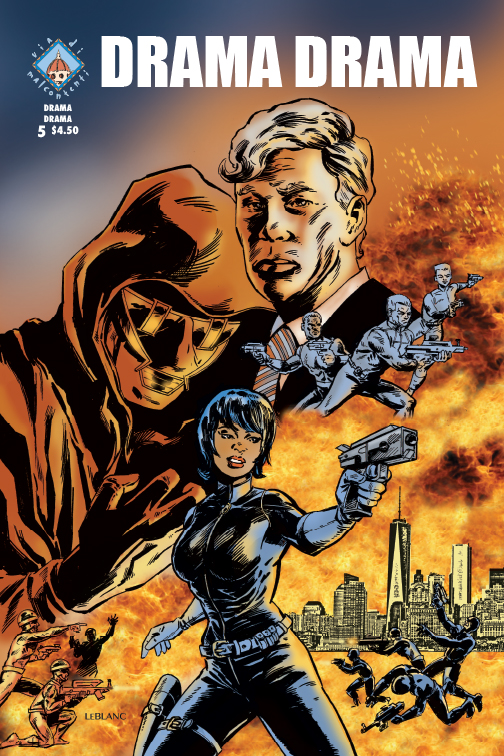 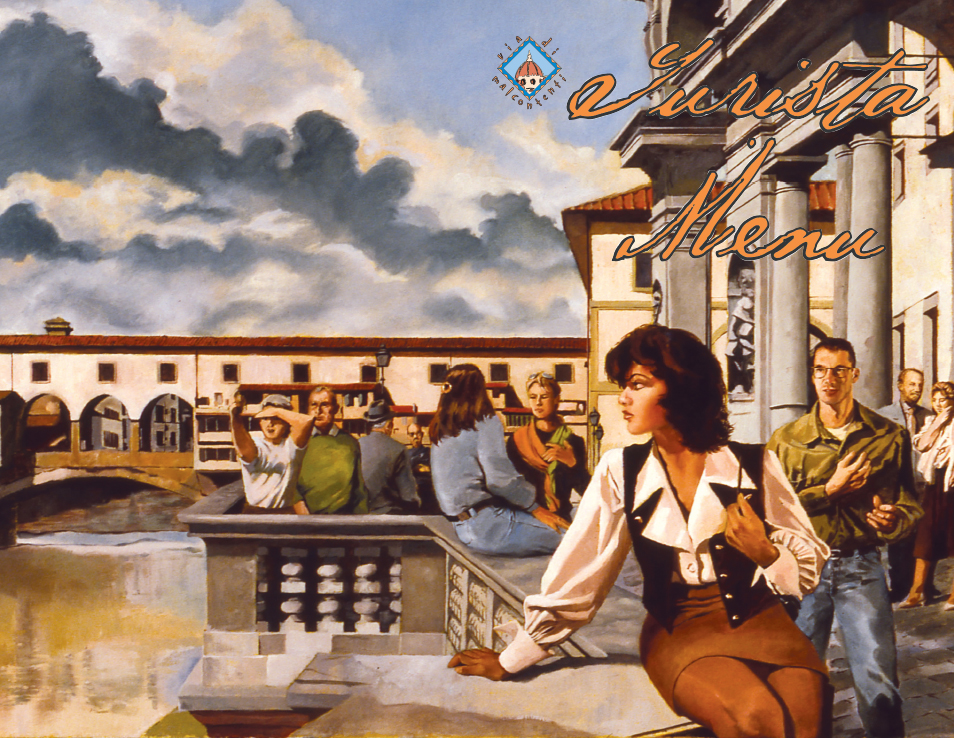 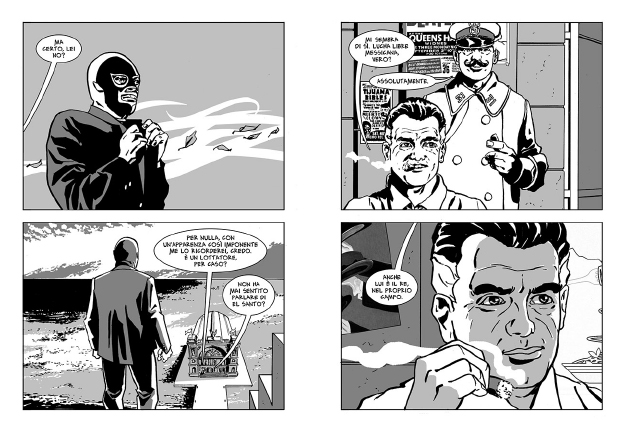 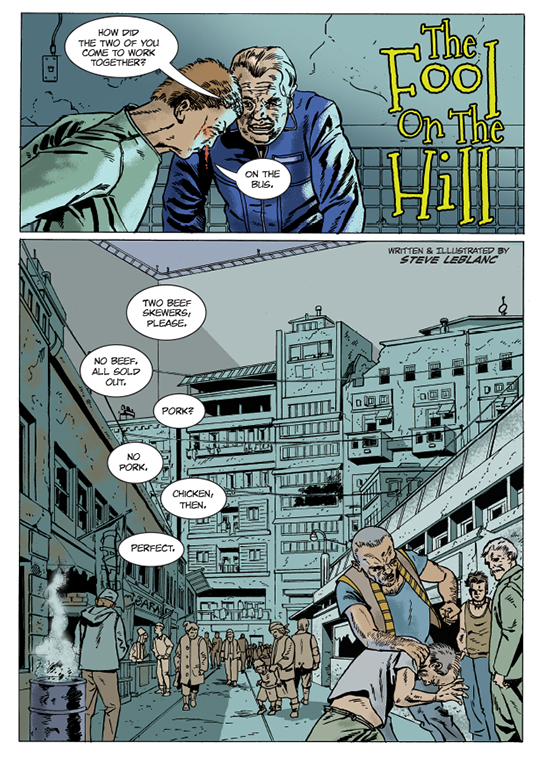 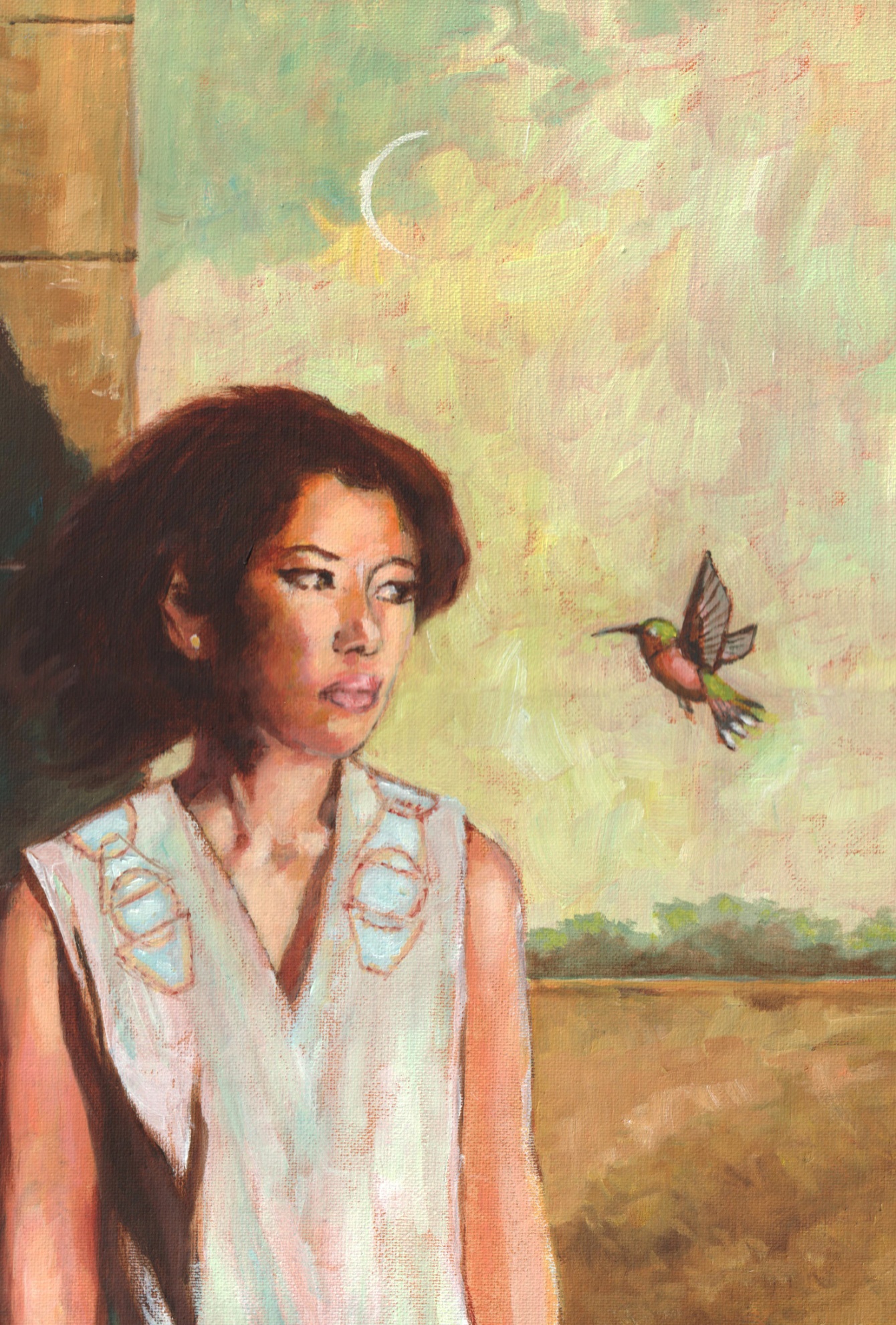 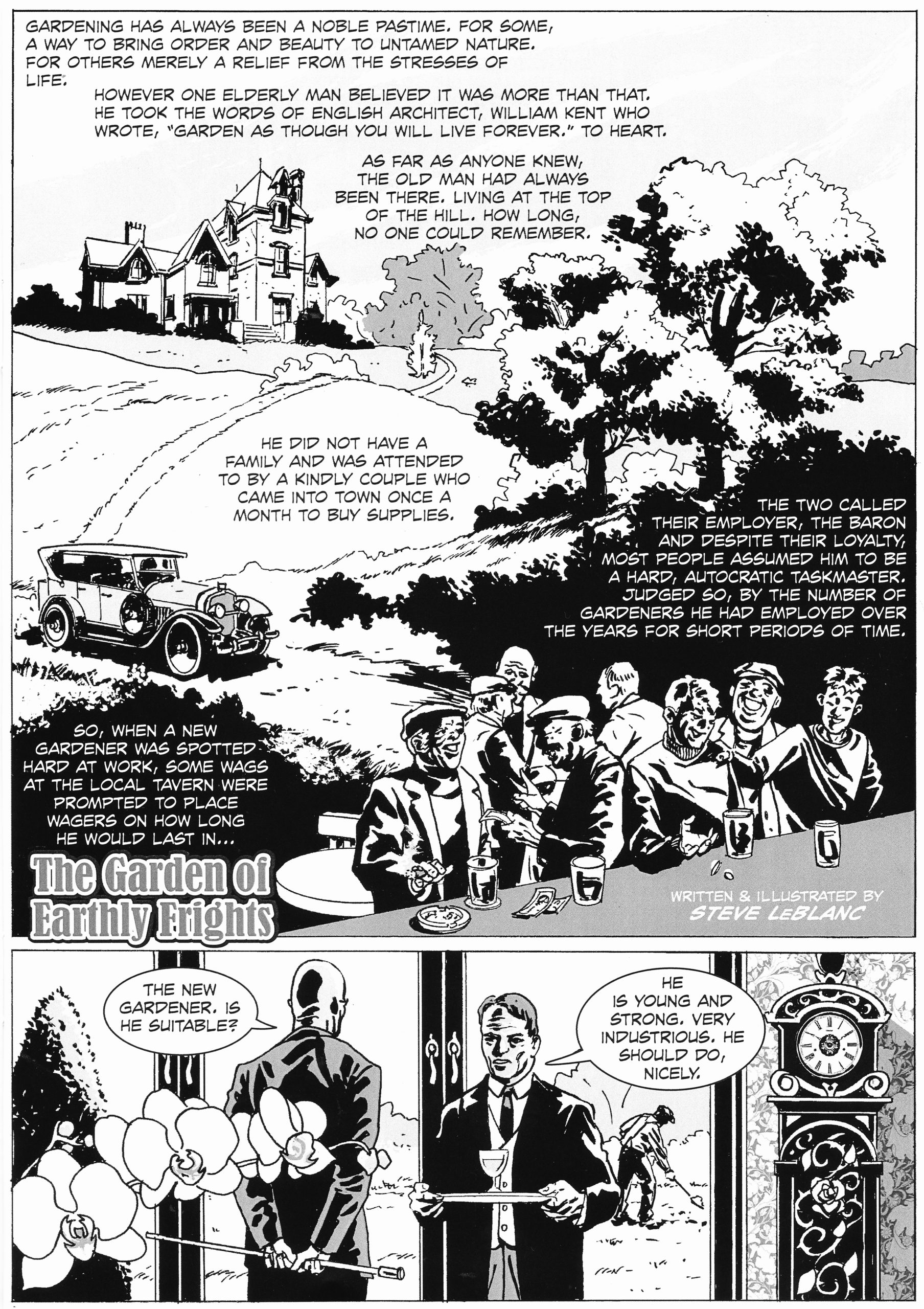