FREELANCE: THE MAN ON THE LANCE

Unlike “Men of the Mounted” and “Robin Hood and Company” both of which began life as cartoon strips, journalist Ted McCall created “Freelance” specifically for the comic book format.

After moving Robin Hood and Company into Anglo-American. McCall wanted to add a contemporary adventurer who would fight the Nazi. He first approached Syd Stein the illustrator of Robin Hood and Company to draw this new character but Syd had tired of cartooning and wanted to return to commercial art. He suggested that his friend Ed Furness another commercial artist might replace him on the new project. Ted approached Ed and Ed accepted.

There are two stories, both given by Ed about how the name “Freelance” was chosen. One is that Ted chose the name after reading that a mercenary knight was called a freelance. A separate check confirms that a “freelance” was a knight without a lord and so could be hired as an extra by any lord. The second is that since both Ted and Ed themselves were freelancers, at least as far as this enterprise was concerned, therefore they would name the character “Freelance”. For the “Freelance” image, Ed used a young blond haired shipping clerk at Sinnott News called Ronny Ullathorne as a model. Ullathorne later joined the Canadian Navy.

Our hero first appeared in July 1941 in a 64 page periodical devoted entirely to his adventures and containing only one advertisement on the back cover. Initially, Ed did the illustrations, but after he joined the Anglo-American staff he became involved with other characters and his work load increased to the point where he reduced his effort to doing the breakdowns. The finished art passed to a staff which although trained in the visual arts was inexperienced in cartooning. The results were crude and at one point stick-on heads were used to maintain consistency in facial features. However as the staff gained experience the illustration work improved. Eventually, the finished work for “Freelance” was entrusted entirely to June Banfield and Priscilla Hutchings.

The series opens with “Freelance” piloting a plane into a tropical valley in the Antarctic to tell his guardians he must live in the outer world in order to fight the Nazi menace. Hidden civilizations was a favourite fiction devise at this time. These guardians are a lost tribe to whom he had been brought as a child by his father. They had raised him although he had gone to the outer world for his education. The elders of the tribe cannot tell him his identity because of a promise they made to his father. Freelance then has neither a country nor for that matter a past. Thus, the McCall/Furness team followed the time honoured Canadian tradition of making the hero generic rather than Canadian, perhaps in the hope that they would be able to sell in the U.S.A. market. After this “origin” introduction the “lost” world disappears from the story line.

As he flew from his refuge “Freelance” spots a British merchant ship being attacked by a German submarine. He saves the British ship by crashing his aircraft into the U-boat. Taken aboard the merchant ship he sails to Africa where, through a series of adventures he aids the British military then vanishes always leaving a jauntily waving stick figure riding on a flying lance. He works he way into the Middle East, Greece and finally France and Holland. These last countries become his main theatre of operations. In these stories we see the same fast narrative style that characterized Ted’s “Men of the Mounted” and “Robin Hood” series.

McCall and Furness created Freelance as a solitary fighter, and he remained that way for a while; however, as Furness remembered it, Jack Calder, Anglo-American’s Managing Editor told McCall and Furness, that “Freelance” was getting “too smug”, and needed a partner to help him. “Freelance” was joined by a Long John Silver type character and so was born “Big John Collins” a modern day pirate complete with peg leg. In addition, it should not escape the reader that the “Big John Collins” / “Freelance” partnership bears a striking resemblance to the “Little John” / “Robin Hood” partnership. In order for “Freelance” to meet “Big John”, McCall and Furness have “Freelance” flying to the South Seas in Freelance no. 9, July 1942. He and “Big John Collins” in their initial encounter fight each other but soon they joined forces to fight that common enemy, the Japanese. Furness recalled that the inspiration for this sequence came from the story of the first encounter between Robin Hood and Little John which is not surprising given McCall’s research for his “Robin Hood and Company” strip.

Another addition to the Freelance team was a female Russian agent “Natasha” who was introduced in Freelance no. 11, November-December 1942. Jack Calder wanted to bring a Russian into the story because the Russians had joined the allies against the axis. Both McCall and Furness opposed the idea of introducing a third principal character but Calder insisted and so “Natasha” was born. In spite of the fact that they didn’t like the character, McCall and Furness did create an interesting heroine whose gushing hero worship for “Freelance” was more than offset by her tough self-reliance. “Natasha’s” other asset was June Banfield who was assigned to draw her. Unfortunately, as time passed McCall and Furness slowly wrote “Natasha” out of the story. After Freelance no. 31, August 1946, she disappeared altogether.

Behind the ebb and flow of character changes, the Freelance comic book was itself changing dramatically. It, like all wartime Canadian comics, appeared in black and white. In 1945, the Globe and Mail acquired a colour press and wanting to increase its use suggested to Anglo-American that they convert their comics to colour. Even though the American comics were banned from the Canadian market as a wartime measure to preserve currency, it was still ferociously competitive. Maple Leaf Comics in Vancouver produced a number of titles. Educational Projects in Montreal produced Canadian Hero Comics. While Toronto had Anglo-American and Bell Features plus a kaleidoscope of small companies battling it out. Colour would give Anglo-American an advantage hard to beat and of course it would prepare them for the entry of U.S. comics which would surely occur as the war wound down.

Freelance, Robin Hood and Company vol. 3 no. 27, July-August 1945 appeared in colour. It was also the first time that Freelance shared his magazine with other heroes. He was joined by McCall’s two other creations “Men of the Mounted” and “Robin Hood and Company” both of which had previously resided in Anglo-American titles Three Aces and Grand Slam. This change, however, lasted only four issues and by Freelance vol. 3 no. 31, April 1946, Freelance had his own comic back. The other creations banished back to their former titles which were now also produced in colour.

In Freelance vol. 3 no. 34, October-November 1946 Freelance achieved another first. He finally had an adventure in the land of his creators – Canada.

Bigger changes were in store for “Freelance”. The war in Europe was drawing to a close and so there was a need to adapt Freelance to peacetime. McCall and Furness brought Freelance through a transition from fighting Nazi to fighting escaped Nazi war criminals to combating a sinister organization dedicated to, what else but world domination. It was called the SS which stood for Super Six. Who could have guessed that in a few short years the menace would be our former ally Russia.

McCall and Furness had a vision of an even larger transformation for “Freelance”. They were attempting to convert him into a detective type character and to introduce him, minus Big John Collins into the world of the newspaper cartoon strip. Some test strips were drawn. As Furness remembered, “They [Fawcett] were impressed by the success in a relatively short time that “Freelance” had enjoyed … and they thought it might take off down there [U.S.]. The idea as I remember now was they were going to turn “Freelance” into some sort of a private eye … they did not have a private eye among their comics at the time, at least not one that was significantly popular.” Negotiations were conducted with McClure Syndication in the U.S. but never achieved success. Freelance died with Anglo-American.

Ted McCall left the comic strip/comic book field entirely. He rose in the ranks to become Managing Editor of the Toronto Telegram. Ed Furness went back into commercial art and later founded a successful company. He retired to a hobby of landscape painting.

“Freelance” was arguably the most popular hero of the 1940’s. Some estimates put comic book sales at 60,000 copies per issue. Ed Furness himself estimated (January 15, 1983) that in 1944 the print run was 48,000 copies with about 42,000 sold. George Henderson said: “Freelance was Canada’s most underrated cartoon character. He was superb.” Pete Harris has called McCall’s scripts well rounded and relatively sophisticated for the time, taking a more realistic approach to the war. This seems a reasonable assessment since McCall wrote adventure stories from a young age and we know his “Men of the Mounted” stories were firmly based on actual events. The art work was less successful because of the way Anglo American Publishing organized it, having several artists on the same story. However, by the time June Banfield and Priscilla Hutchings were drawing it, it was as good as the majority of comic books of the time.

“Freelance”, “Robin Hood & “Men of The Mounted” are again combined into one title.

“Freelance” and “Robin Hood plus “Men of The Mounted”” split to separate titles again.

This is based on earlier notes written in the 1980’s from analysis of the material and interviews with Ed Furness.

Guardians of the North: The National Superhero in Canadian Comic-Book Art, National Archives of Canada, 1992: “Iron Man and Freelance”, Writ., John Bell. 3 – 4. A catalogue for the exhibit of the same name.

In a conversation with Ed Furness on Jan. 15, 1983, he said that Freelance had attained a print run of 48,000 copies in 1944 of which he estimated conservatively that 42,00 copies where sold. He also mentioned that Ted McCall used to come into the office and announce triumphantly that they were out selling the competition. 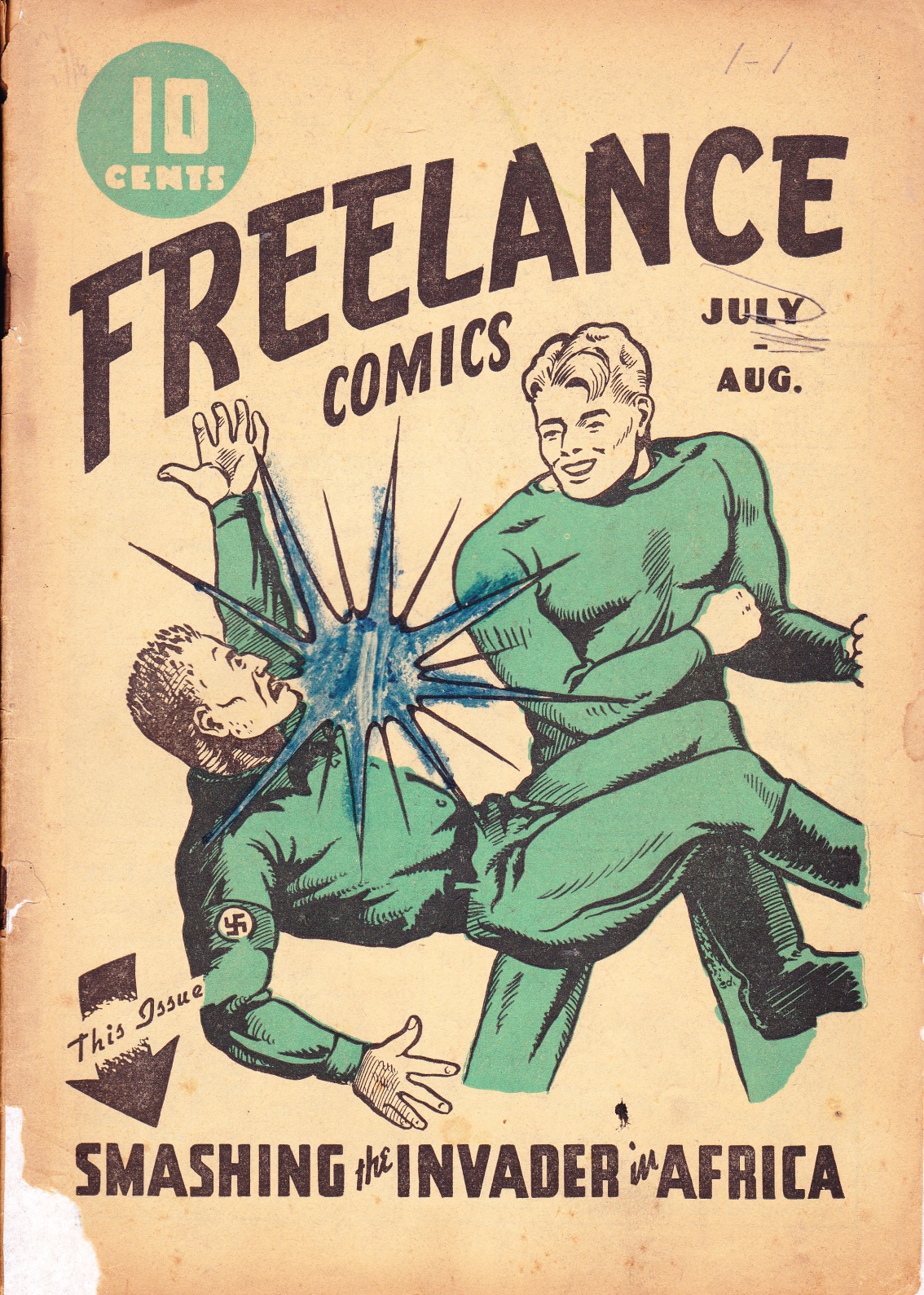 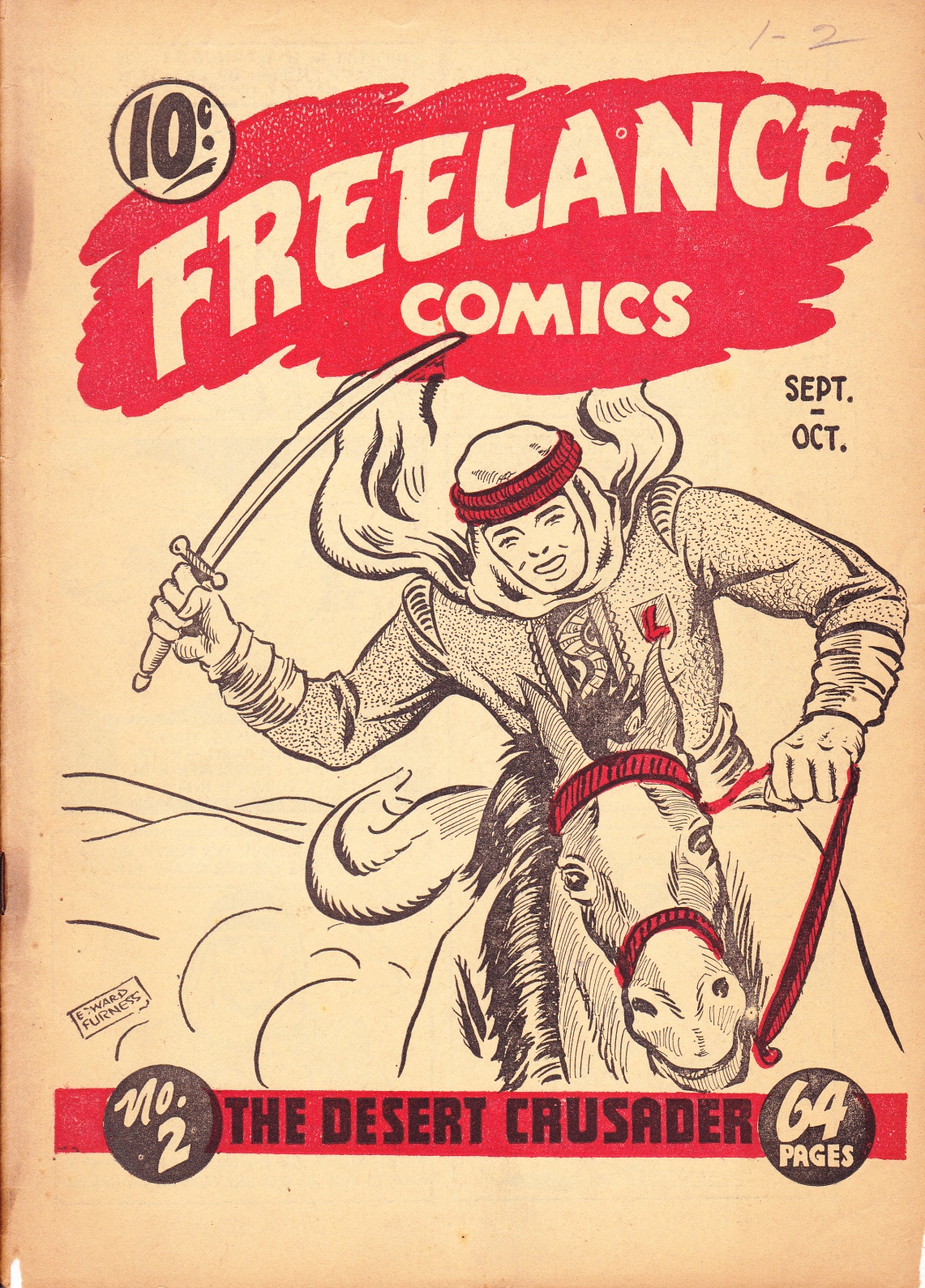 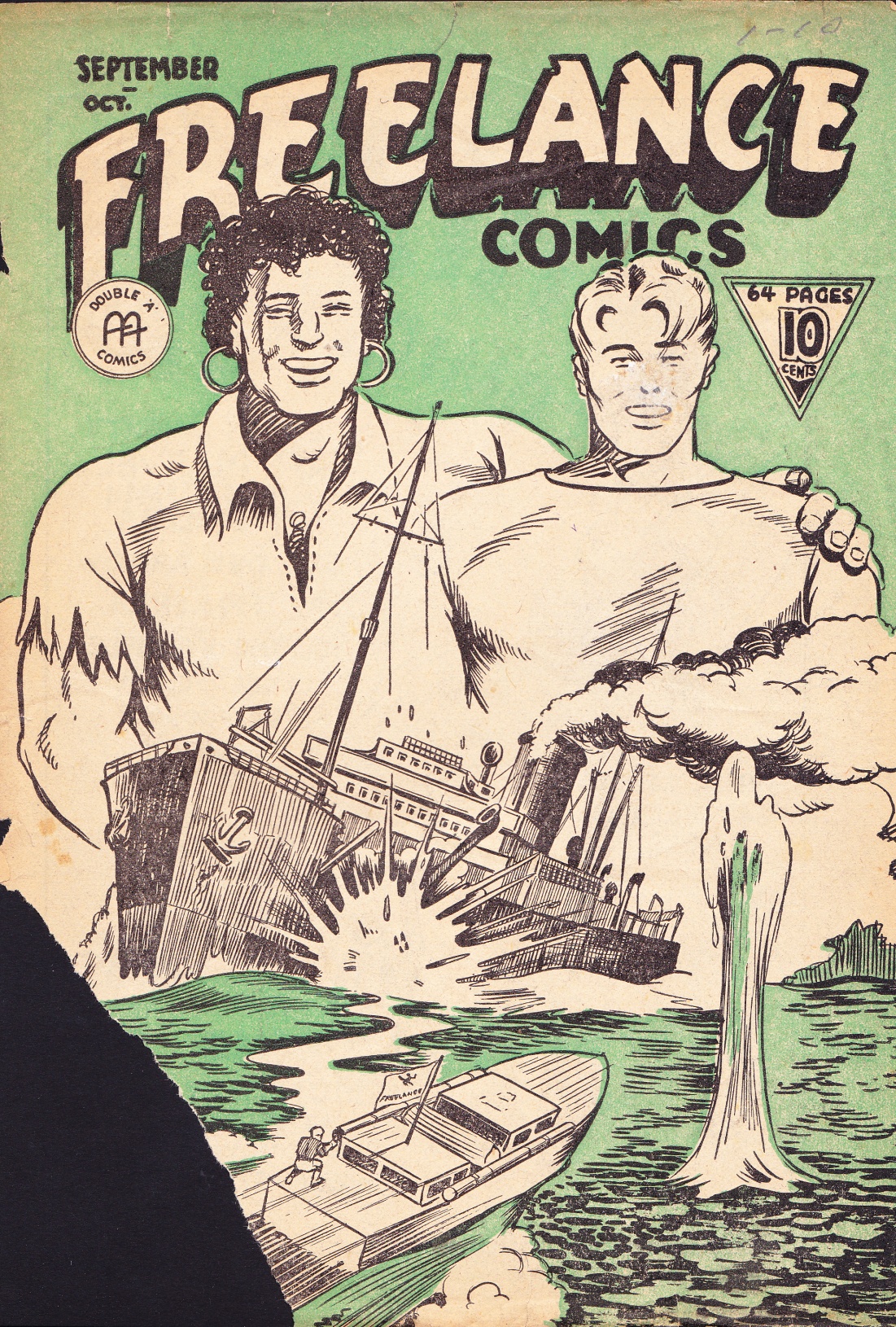 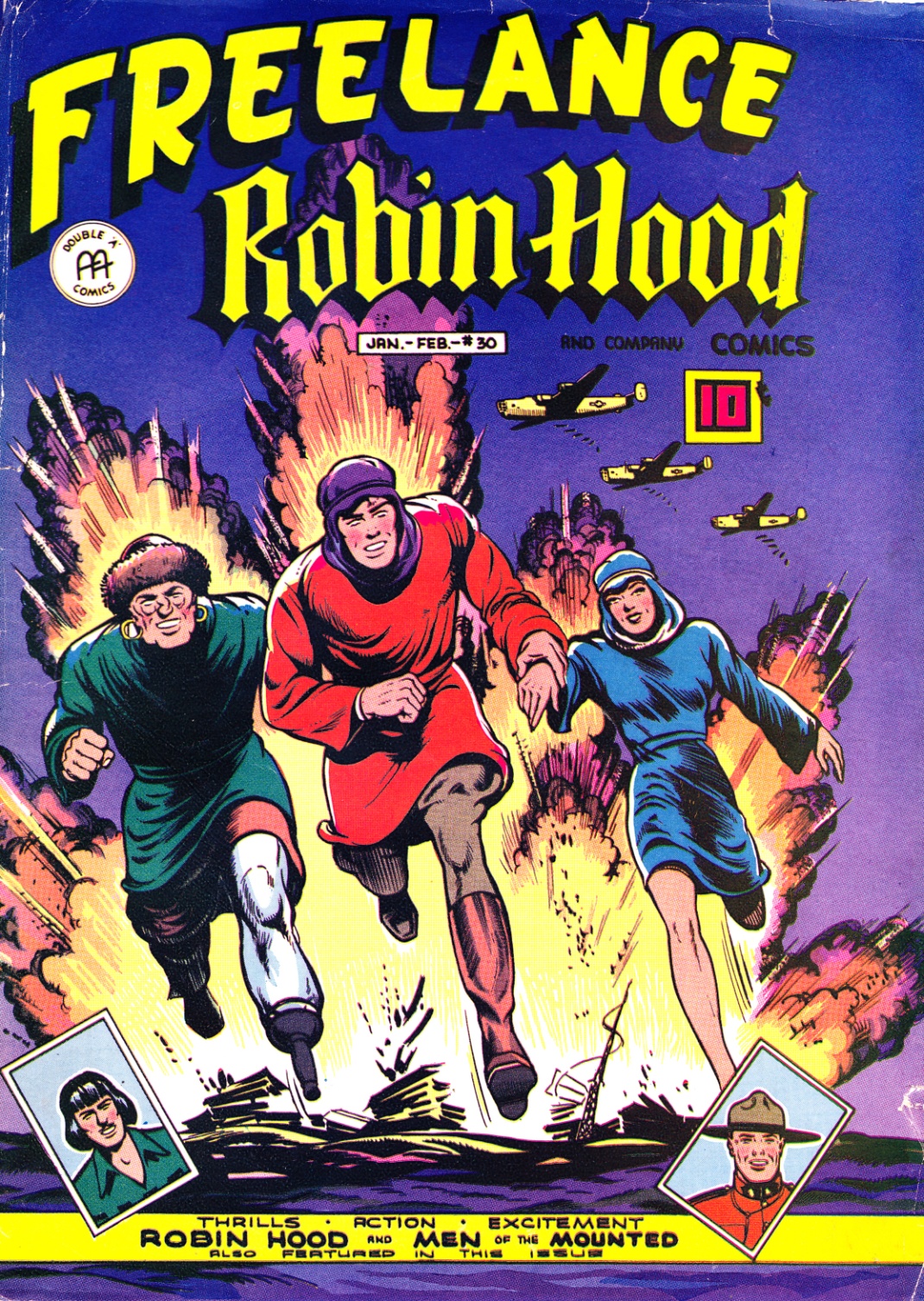 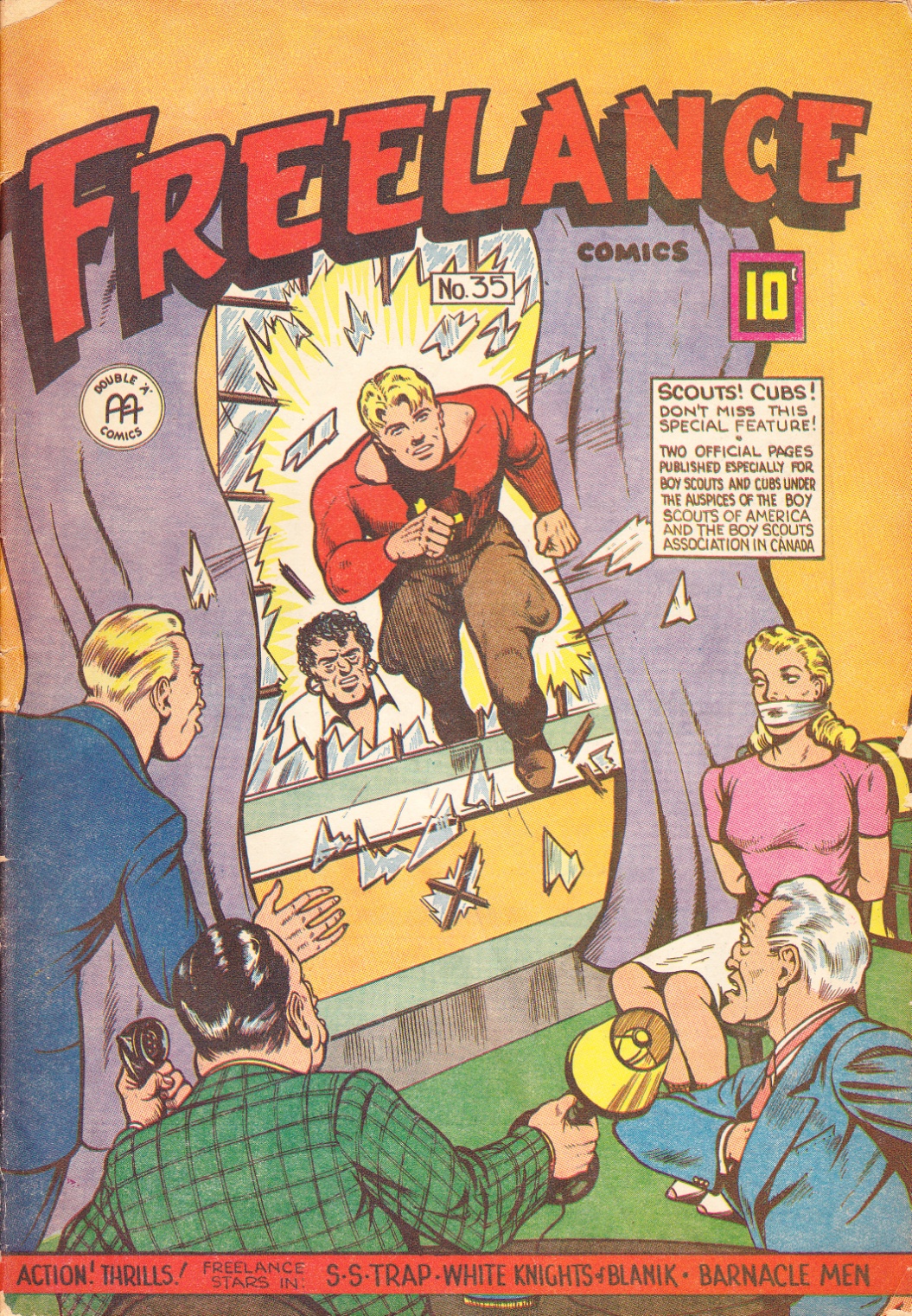 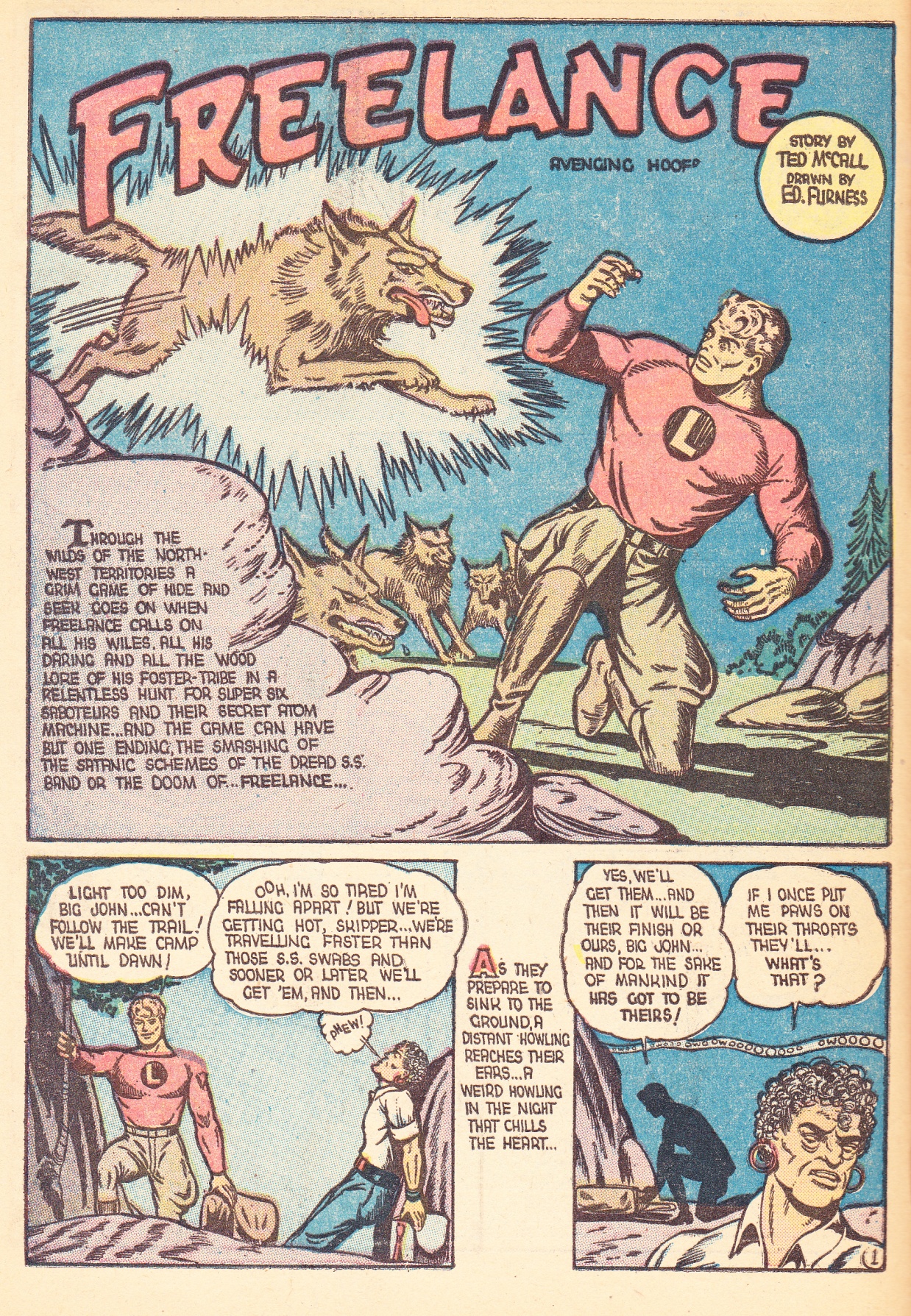