“Outside of animation, which I still think is the purest form of creativity that an artist can possibly be involved in, this other [cartooning] was a good second best as far as I was concerned.”

Ed Furness was born 11 May 1910 in Yorkshire England. He migrated with his family to Welland Ontario in 1920 where his mother had family.

They later moved to Dunnville Ontario of which he had very happy memories. He remembered drawing cartoons and getting in trouble with the teachers because of them. At one point, he recalled, “I conned my dad into paying for a correspondence course in cartooning. A complete waste of his money and my time.”

Later, he began writing for the Dunnville Chronicle and was a stringer, a local correspondent paid on the basis of lineage, for one of the Hamilton papers. The editor of the Chronicle, Ed Fry, hoped to make a sports writer of him and so took him to Toronto in 1929, where he met Jimmie Frise and Bill Hewit son of Foster Hewitt the great Hockey announcer. He was offered a job as a sports writer but turned it down, much to the chagrin of Fry. But, as he said he no intention of being a sports writer.

He went to the Ontario College of Art (O.C.A.) and trained under J.E. Macdonald, Frank Carmichael, Franz Johnston and William Beatty, and graduated in 1933. The first three were members of the famous Group of Seven painters.

“If I learned anything from those wonderful men, particularly from J.E. Macdonald, it was to work with integrity and intensity, … I guess it’s the word ‘intensity’ that makes me go, … I’m going to enjoy doing what I’m doing, full tilt.”

His first job after graduation was in animation. In May 1933, Bryant Fryer, one the teachers at O.C.A., who, according to Ed, was more entrepreneur than instructor, started a film company Bryant Fryer Productions at 96 Bloor Street Street West in Toronto. The company was backed by the Gooderham family and Ontario government. The films were Baby Bunting, Sailor’s Night On The Town, and Jack and the Beanstalk, a seven minute film.

Ed and a Ralph Blaber were hired on at $5 per week which as Ed pointed out was a good wage during the Depression.. The two of them did backgrounds and layouts, then story boards. Although Ed remembered they got the idea of using silhouettes in black from China, Karen Mazurkewich discovered it came from the art of the Chinese shadow play.. They had a hand turned camera which gave jittery light and jittery motion. The exposure problem was solved when Livingston in the Parliament Buildings motorized the camera and mounted it facing down.

Bryan took the films to England to promote more business. He was not successful and the company ended from lack of funds. One or more of the films is archived at the National Film Board Archives.

Ed returned to Dunnville where he tried to start a commercial art business but since there was already a company in town this effort did not succeed. He in turn went into life insurance sales which went quite well. At the same time, since he could play the fiddle, he made extra money going to various local dances as part of a pickup band.

He went to the U.S. and did window displays for department stores in Cincinnati. Not liking the work he returned to Canada, married Nellie Gifford, then they returned to the U.S. where they travelled about the country, with Ed doing freelance work. About 1939, he did create a comic strip which he tried unsuccessfully to sell in New York. They might have stayed there but World War Two broke out and Ed returned to join the armed forces. For health reasons, he wasn’t accepted, at the same time he found it difficult to get a good job, but as he said you knock on enough doors and you’ll find one..

About this time Ed became involved with Ted McCall and Anglo-American. Ed’s friend Syd Stein was doing the illustration duties on Ted’s “Robin Hood & Company when Ted now involved with Anglo-American came up with an idea for a World War Two espionage hero, who became known as Freelance. He approached Stein to illustrate it but Stein wasn’t interested. He wanted to return to commercial art. He told Ted that he had a friend Ed Furness, who might be willing. Furness recalled his first encounter with Ted. “He gave me a script and I looked at it and thought, Holy Moses, this guy should write for Cecil B. DeMille. He’s always talking about hundreds of extras.” In spite of these reservations, Ed drew some pages which satisfied McCall who took him to meet Jack Calder, the Managing Editor of Anglo-American. Since Ted wanted him Calder was ready to hire him but Ed was not about to give up his existing job for this untried company. He countered with a free-lance proposal. “You give me the scripts. I’ll show you the finished work. If you’re not happy, we’ll scrub the whole deal. If you are happy, I’ll keep turning it out.” So, Ed drew comics at night for $5 a page for about six months during which he realized he would have to make a choice between his two jobs. By this time he was earning more money cartooning and so he chose Anglo-American. But there may have been more to it than that. “I was enthralled by the whole prospect. Outside of animation which I still think is the purest form of creativity that an artist can possibly be involved in, this was a good second best as far as I was concerned.” McCall continued to script hundreds of extras and Furness learned the value of a big head in the center of the panel. Peter Harris said “Furness’ initial artwork on “Freelance” can only be described as crude but issue by issue he evolved a dramatic style….”

As he gained experience Ed Furness created “Don Shield & His Reverso Ray”, “Red Rover” and “Dr. Destine”. For more information on these characters go to the appropriate entry.

Anglo-American with its coloured comics and its streamlined stable of original characters was well positioned to take on the American comics as they flowed back into postwar Canada and so it came as a shock when it closed its doors. Ed Furness was stunned when he learned that Freelance December – January 1947 would be the last issue. He had settled in his mind that comic books would be his career, but this wasn’t enough to entice him to move back to the U.S.

About the time Anglo-American was shutting down, Jimmie Frise died in June 1948. Ed was offered the job of continuing his strip, but he wasn’t interested. In his mind it should not have been continued. It was Frise’s strip unique to him. As Ed said if he took it over it would have changed and in effect become his strip not “Juniper Junction”. Looking at post Frise “Juniper Junctions” this is exactly what happened. It lost the personality Frise brought to it and quickly declined in popularity.

Ed went back into commercial art and worked for about eighteen years for Southam Printing. As time passed the company became more corporate and less personal so that when Alex Gilchrist of Gilchrist Printing which specialized in fine colour reproductions, wanted to retire and sell the business Ed was ready to join two employees there and to buy the company in 1966. He eventually became president of the firm.

In 1976 he retired to devote his time to landscape painting and getting together with some other fellows to play in a band at local functions. His work hangs in collections in Canada, England, Germany, South Africa and the United States, and appeared in local and one man shows like T. Montgomery Inn in 1986 and the Richview Library in 1988.

He died peacefully at the Tyndall Nursing Home 20 April 2005 in his 95th year.

This is based on 1980’s interviews with Ed Furness. 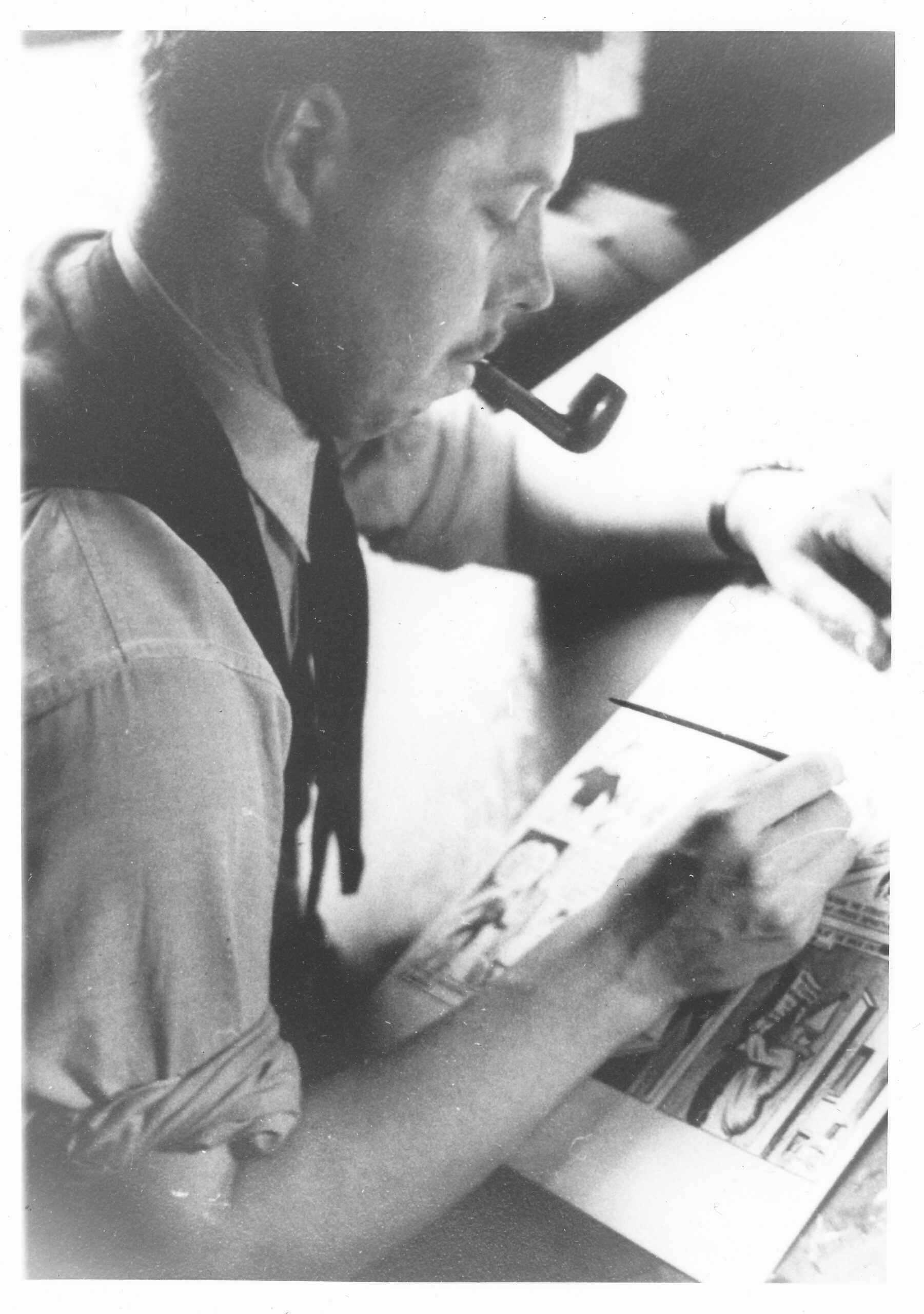 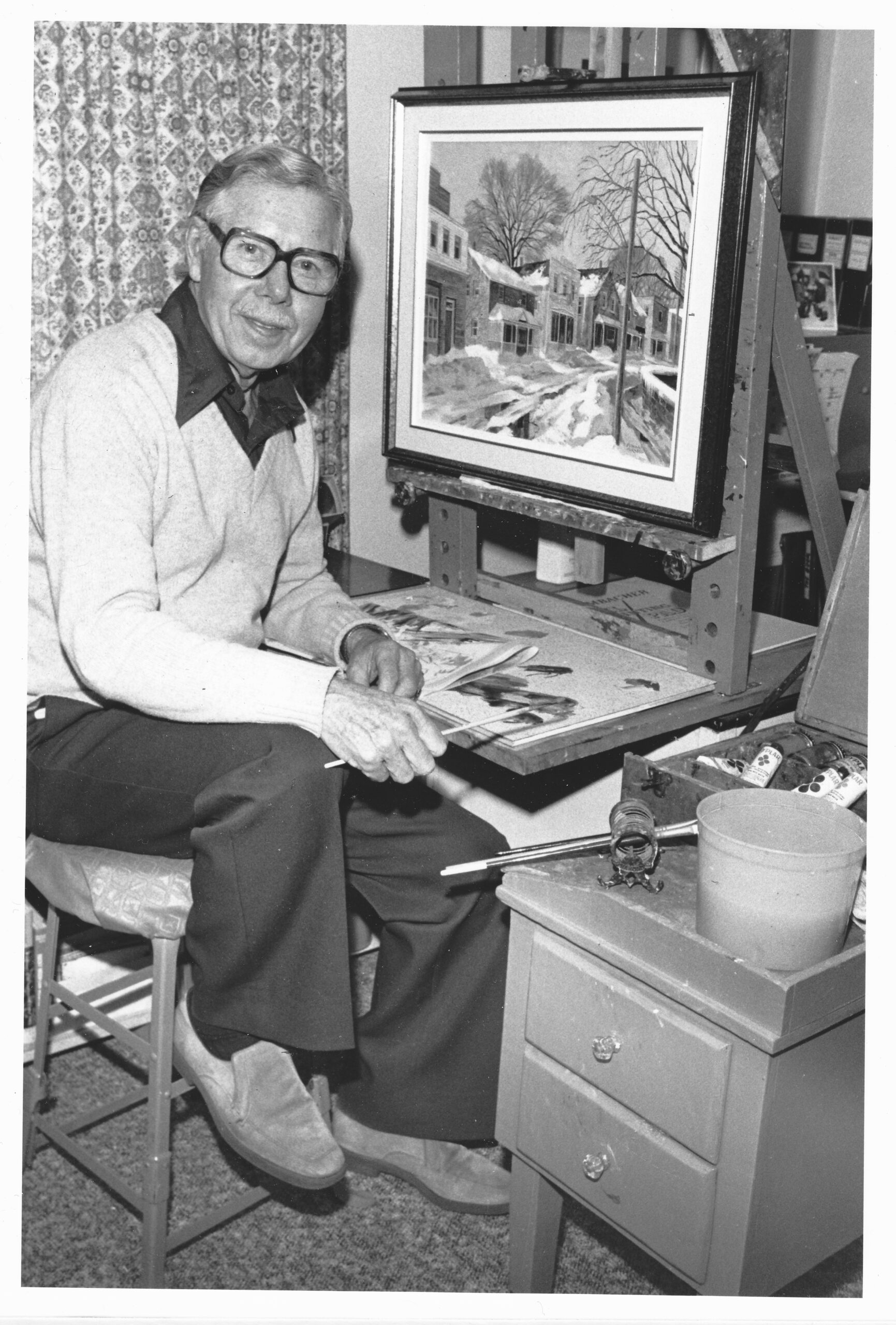 Ed Furness retired, in front of one of his paintings, November 1981. 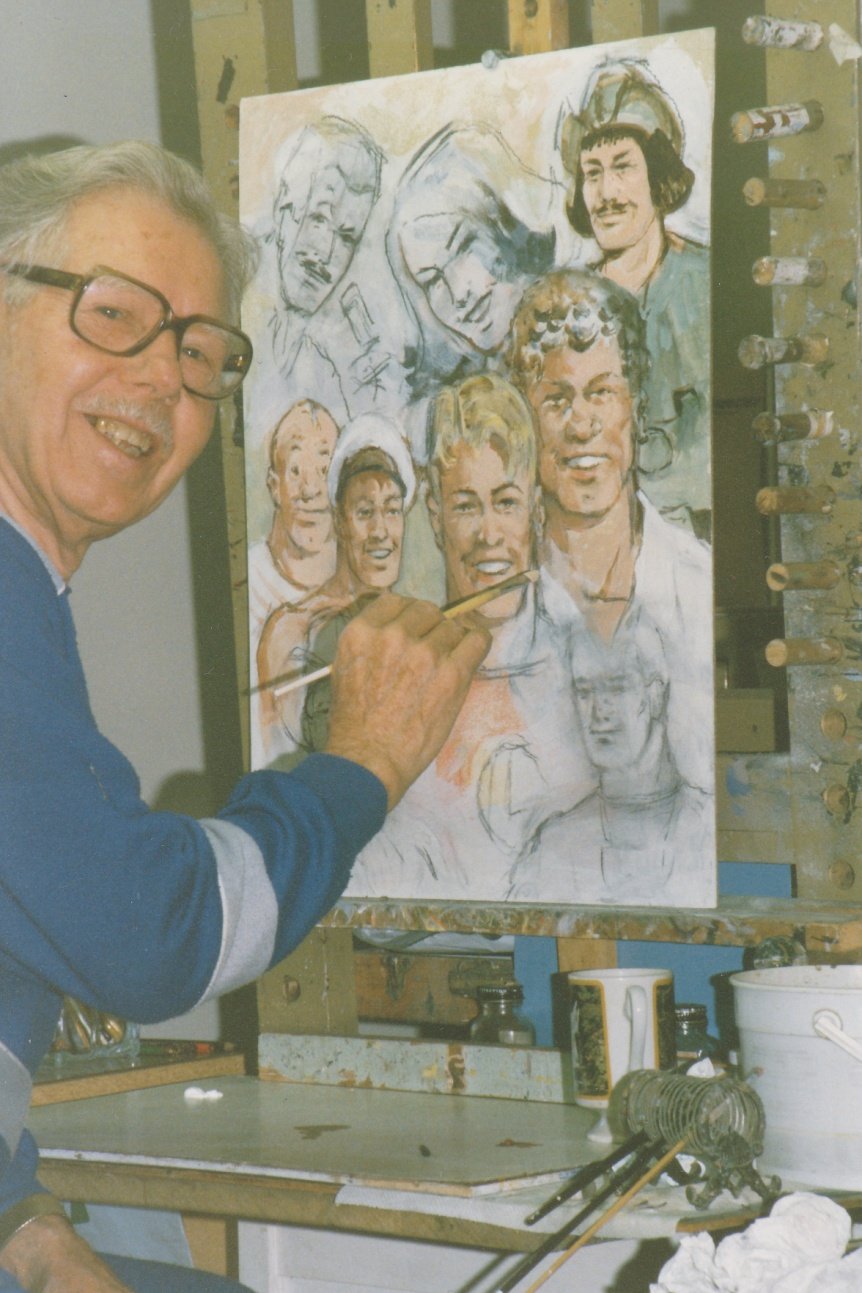