This character and “Scotty MacDonald” both created by Al Cooper appeared in Active Comics and Dime Comics respectively for February 1942, making them among the first characters created under the Commercial Signs later Bell Features and Publishing banner.

“Captain Red Thortan” who Al modelled on a friend who later became his brother-in-law is an adventurer travelling the four continents. When World War 2 broke out he uses his skills to aid British and American forces against the Japanese in the jungles and oceans of southeast Asia. Initially he is partnered with Lieutenant Harley. They are in the Malayan jungle where the “Captain” saves a British convoy. He then rescues a British Commander’s daughter who has been kidnapped by the Japanese. Both he and Farley continue to fight the Japanese. They emerge from the jungle to the coast and board an apparently abandoned junk which it turns out is captained by “Sing Tong” an old friend of “Captain Red”. The trio capture a Japanese destroyer and encounter and American torpedo boat with which they partner. More coastal battles in partnership with the Americans. “Lieutenant Harley” and “Sing Tong” disappear from the story, “Capt. Red” returns to the jungle to immediately rescue a Dutch female from Japanese soldiers. Active 13 has no episode, but rather a panel telling readers that Al has joined the R.C.A.F. but “Captain Red Thorton” will continue which it does under Al’s authorship. “Captain Red” is now helping natives to fight the Japanese. As can been seen below the episodes are about half the size they were earlier. Issues 15 and 16 are unidentified and the drawing quality has somewhat deteriorated. “Captain Red Thortan” continues through issues 17 and 18, but there is no episode in issue 19. Finally, Fred Kelly takes over with issue 20. Under Fred’s hand “Captain Red Thortan” still fights the Japanese but as well as a jungle fighter, he is now a skilled pilot flying a Mosquito aircraft.

In issue 25, action turns from fighting the Japanese to busting opium ring, a good indication that in response to the end of World War 2, Bell Features was switching to civilian stories. This effort was short lived and “Captain Red Thortan” ended in issue 27 as Bell Features attempted to survive by importing American product.

The first four episodes of this serial as well as those of “Scotty MacDonald” trace Al Cooper’s improvement as a cartoonist. In the beginning his story telling was rather stilted and his drawings without nuance. Panels were large and predominantly regular. The figures almost had the simplicity of colouring book figures. Over a quite short period the illustration work became more interesting with more complex panel construction and he is increasingly effective in his use of blacks. Al’s strength was his drawing of military equipment, and he used this in his work to increasing advantage. At times, the ships and aircraft almost become characters themselves. When Al entered the R.C.A.F. his work on “Captain Red Thortan” became less polished perhaps better described as rushed since he worked on it and “Scotty MacDonald” at night after he had finished his duties. It is not surprising that only five issues after Active 13, he left the serial altogether since he was transferred to England. Fred Kelly took over the series. 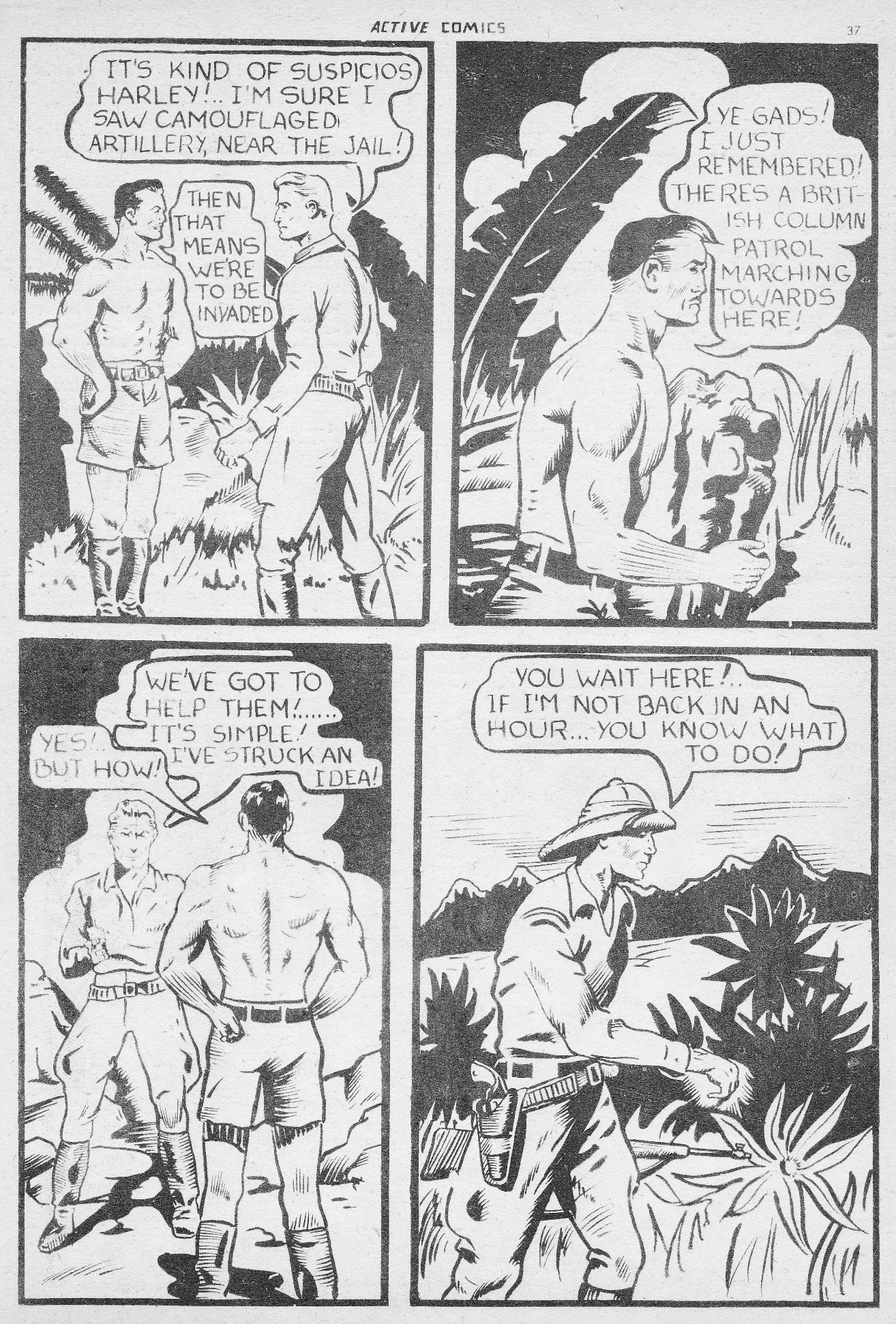 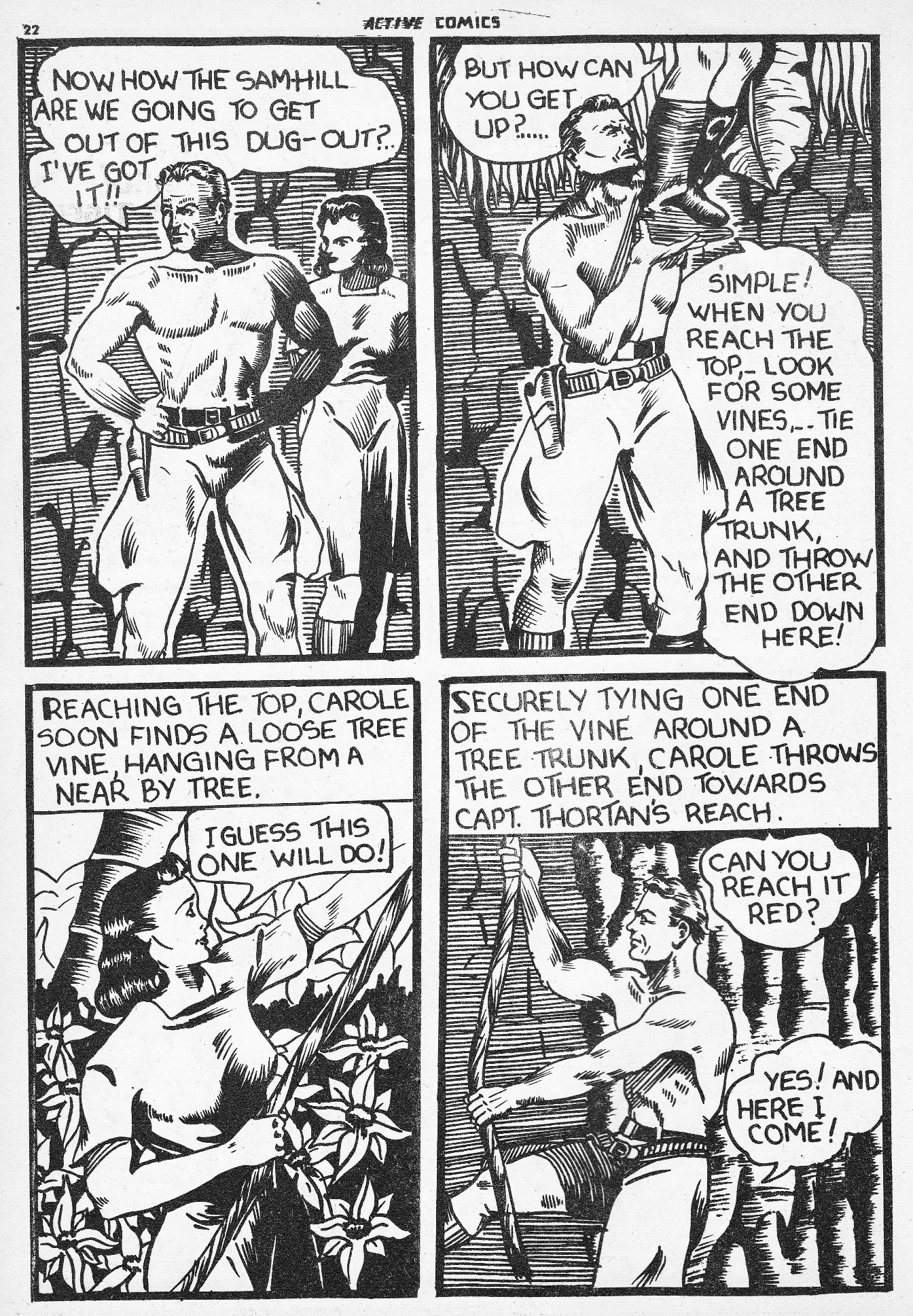 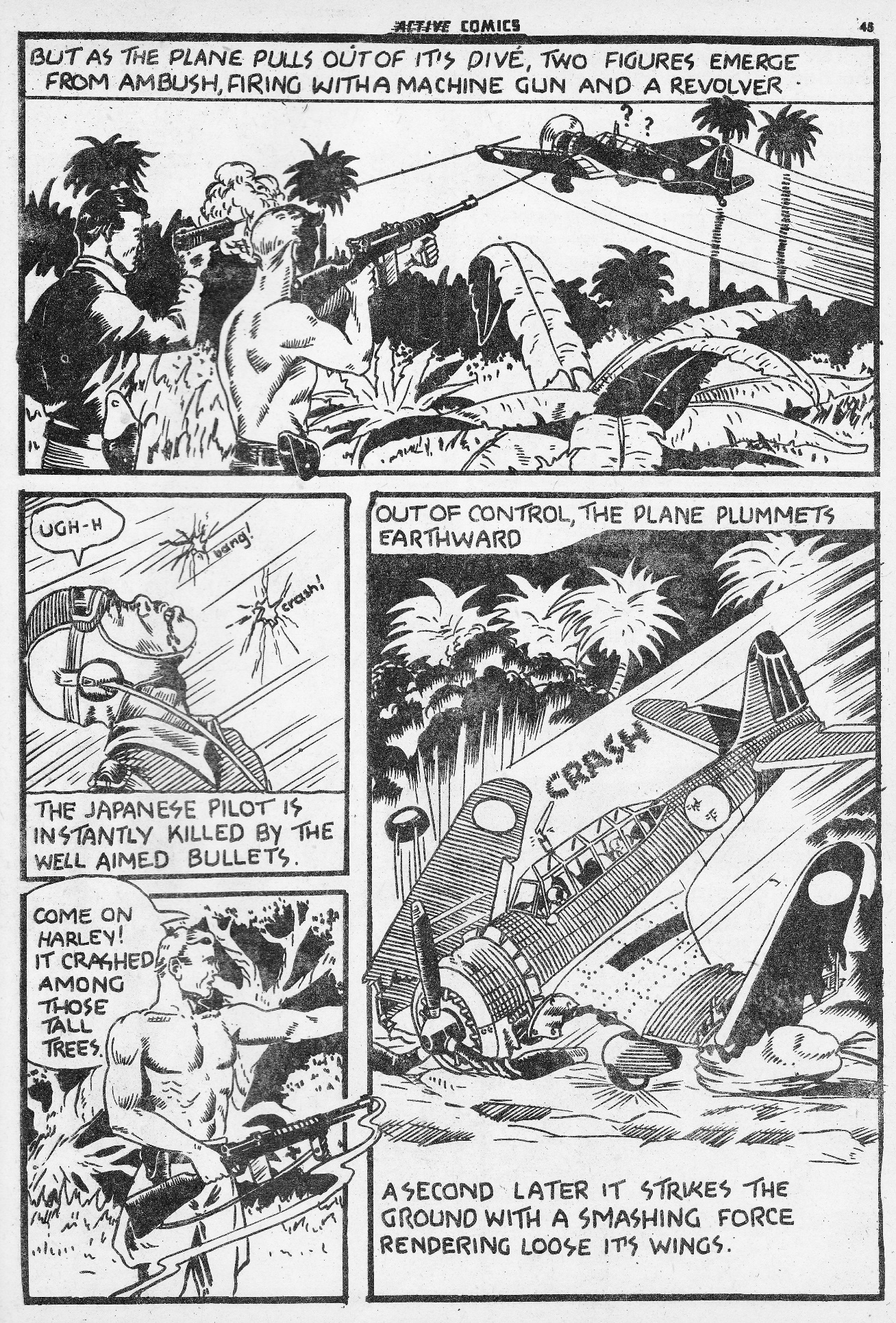 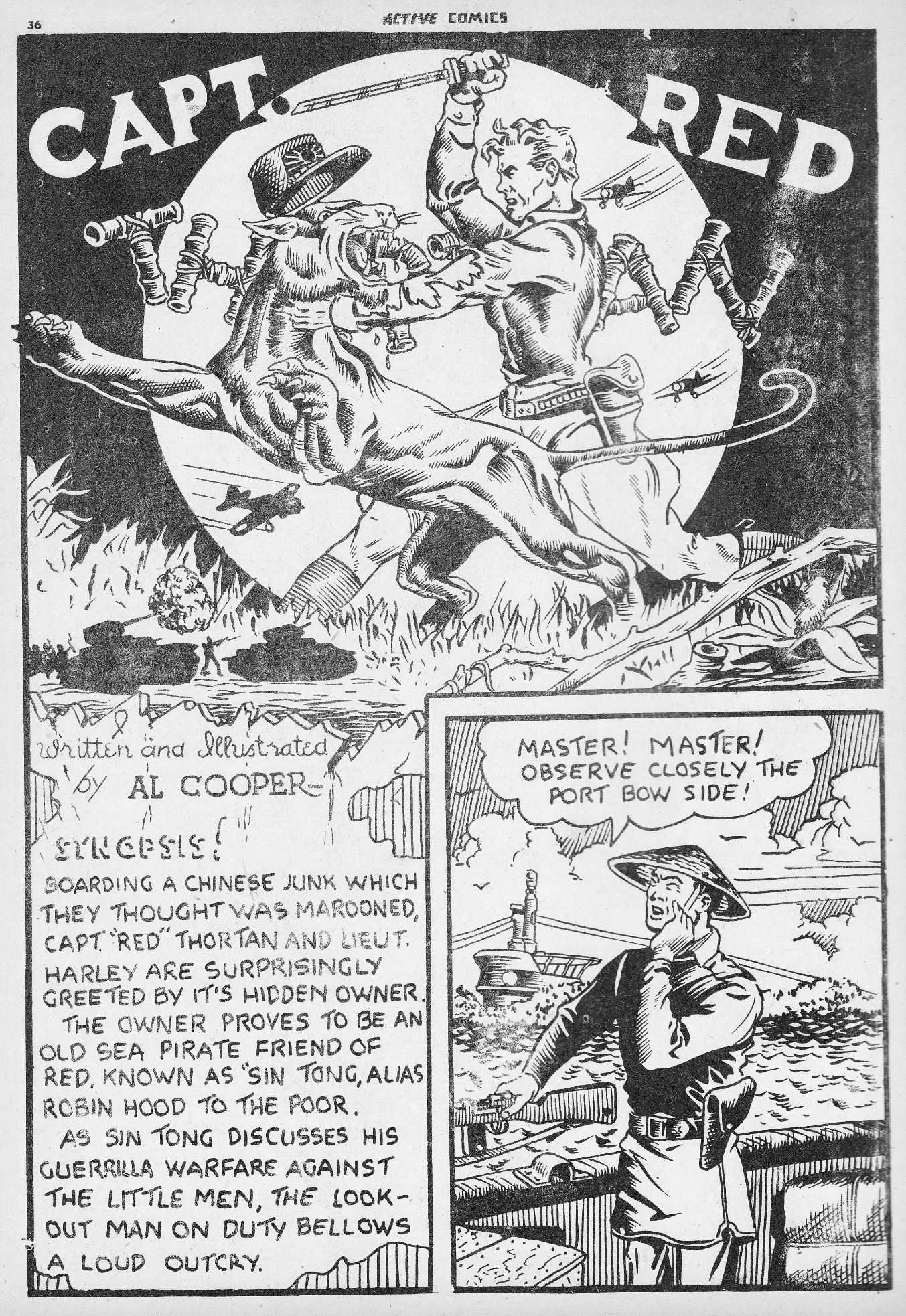 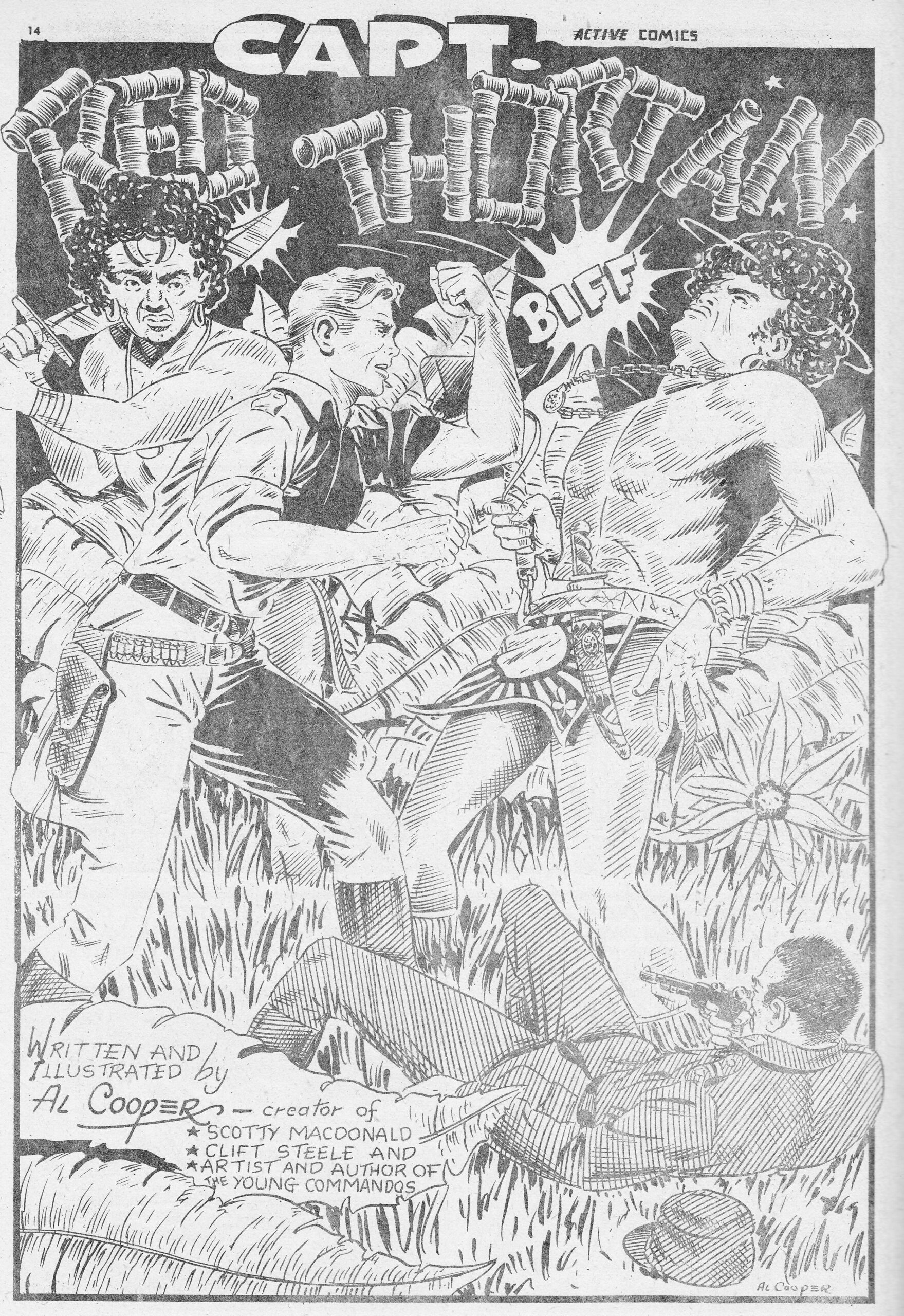 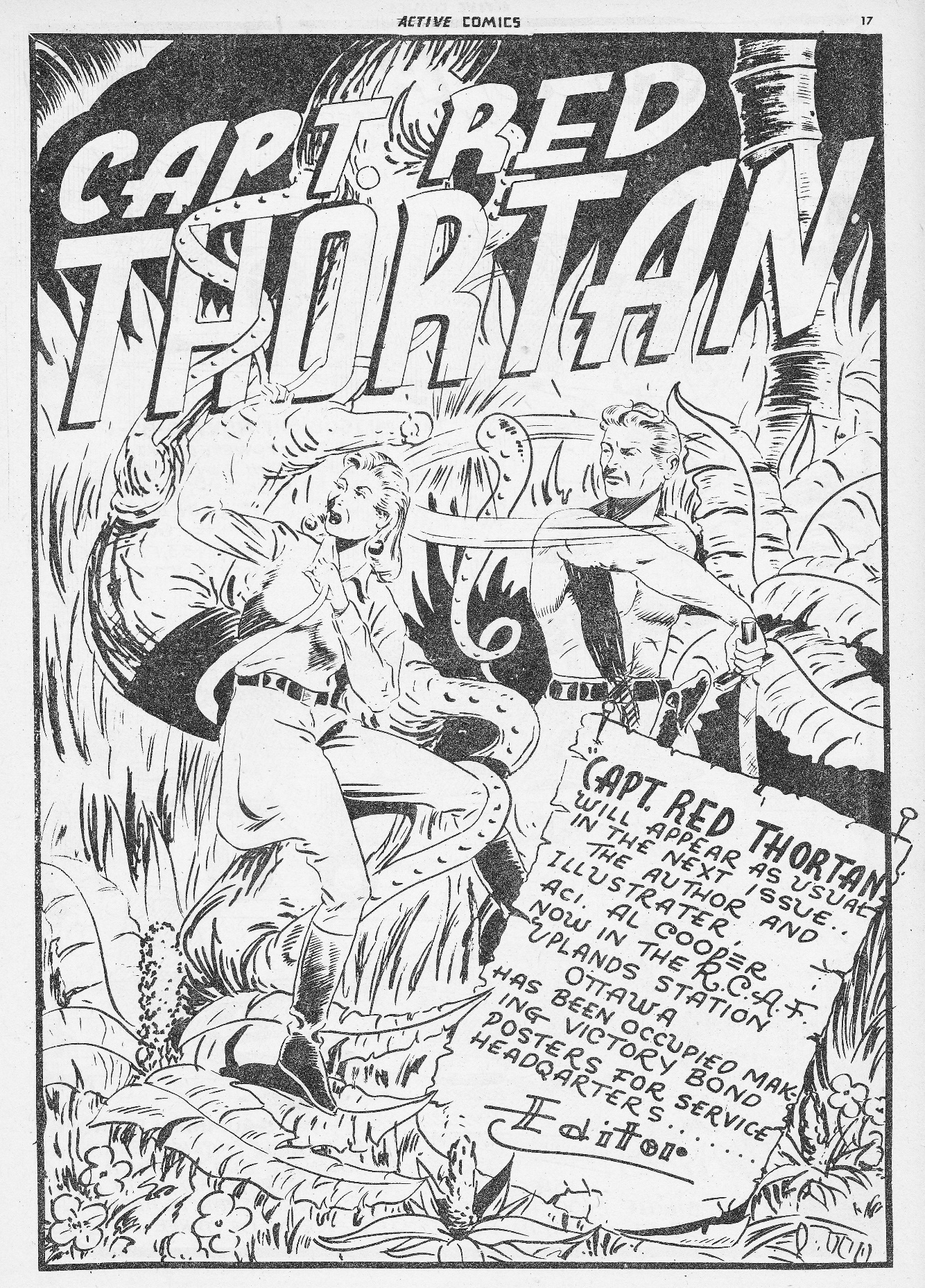 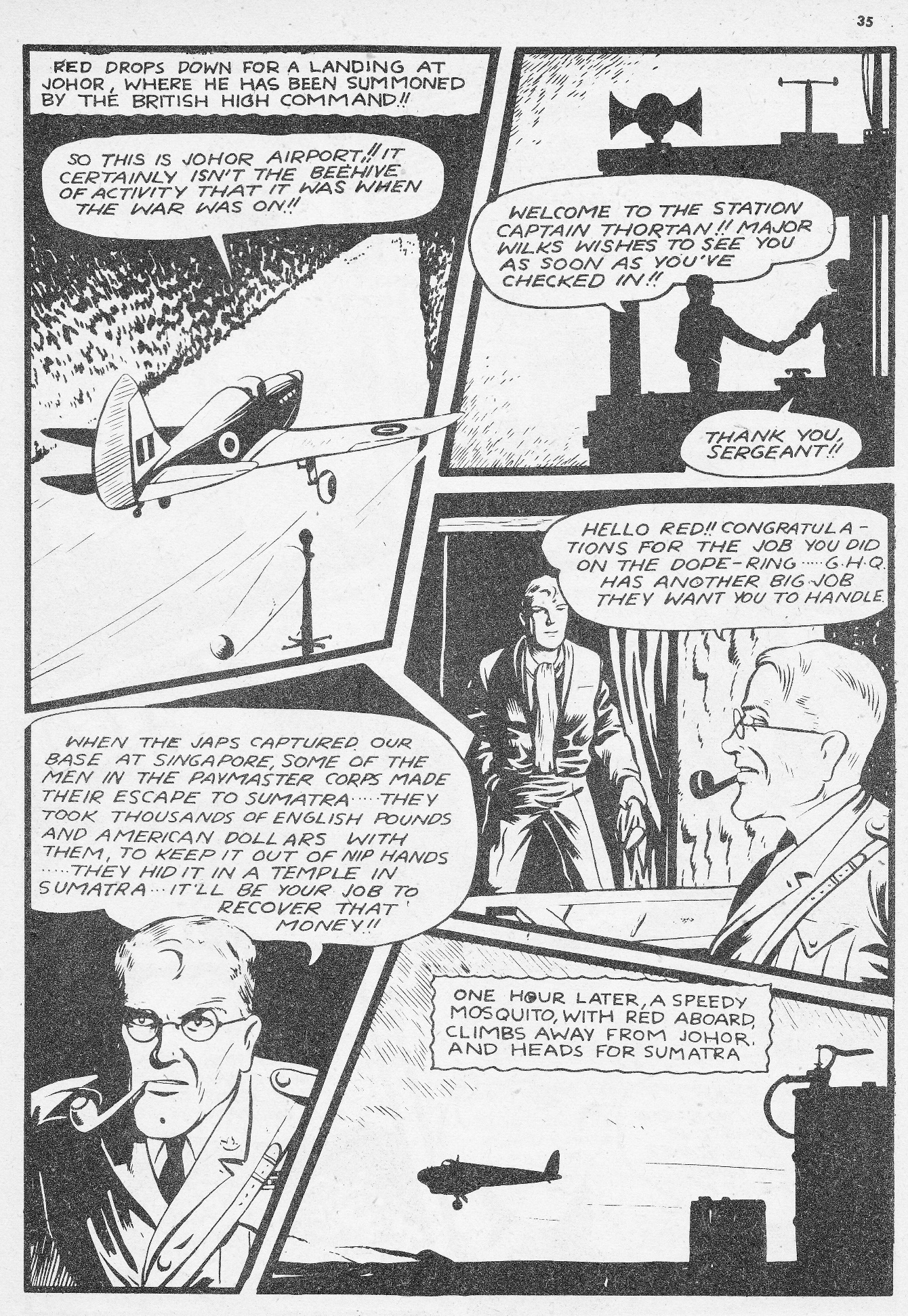 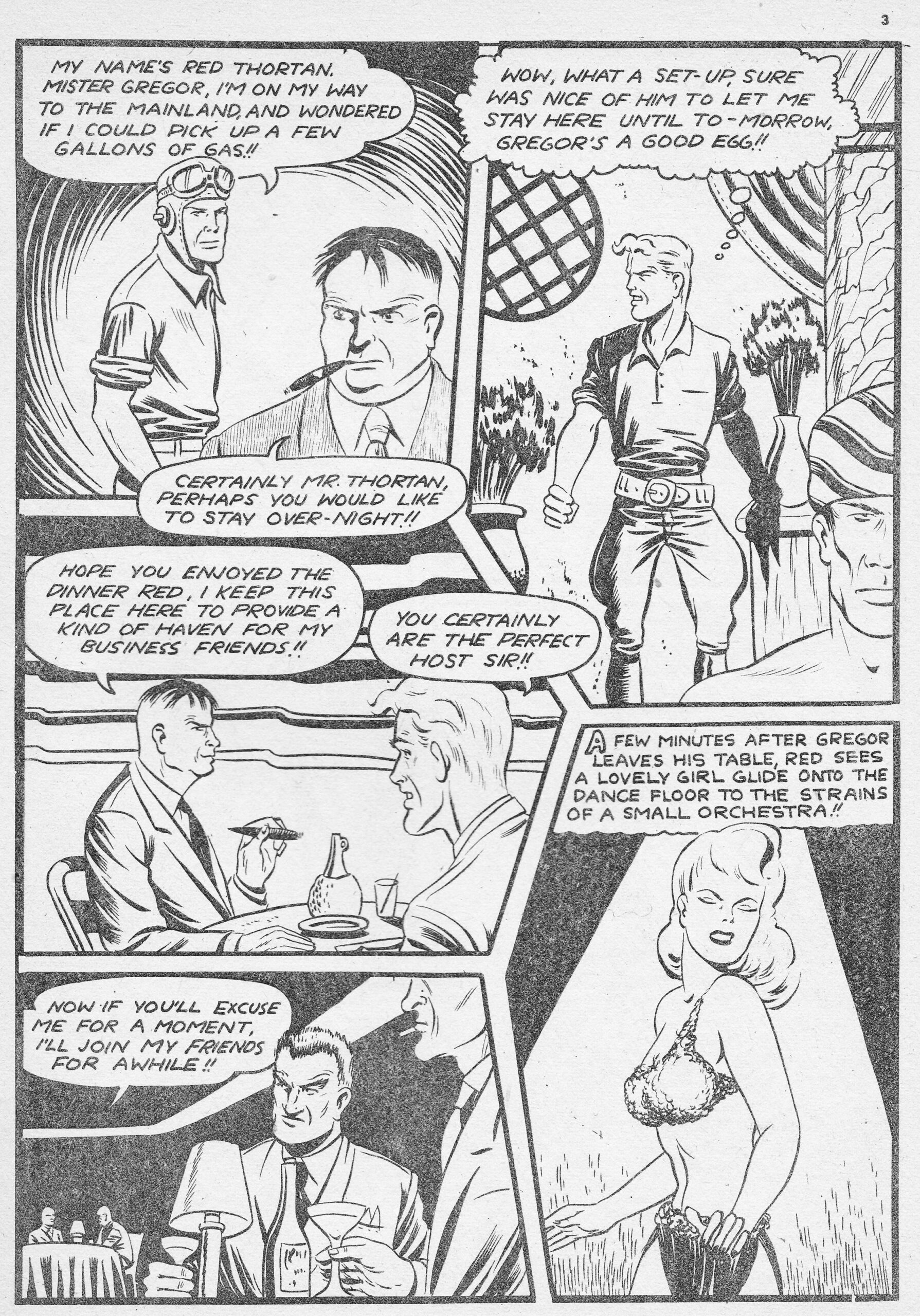