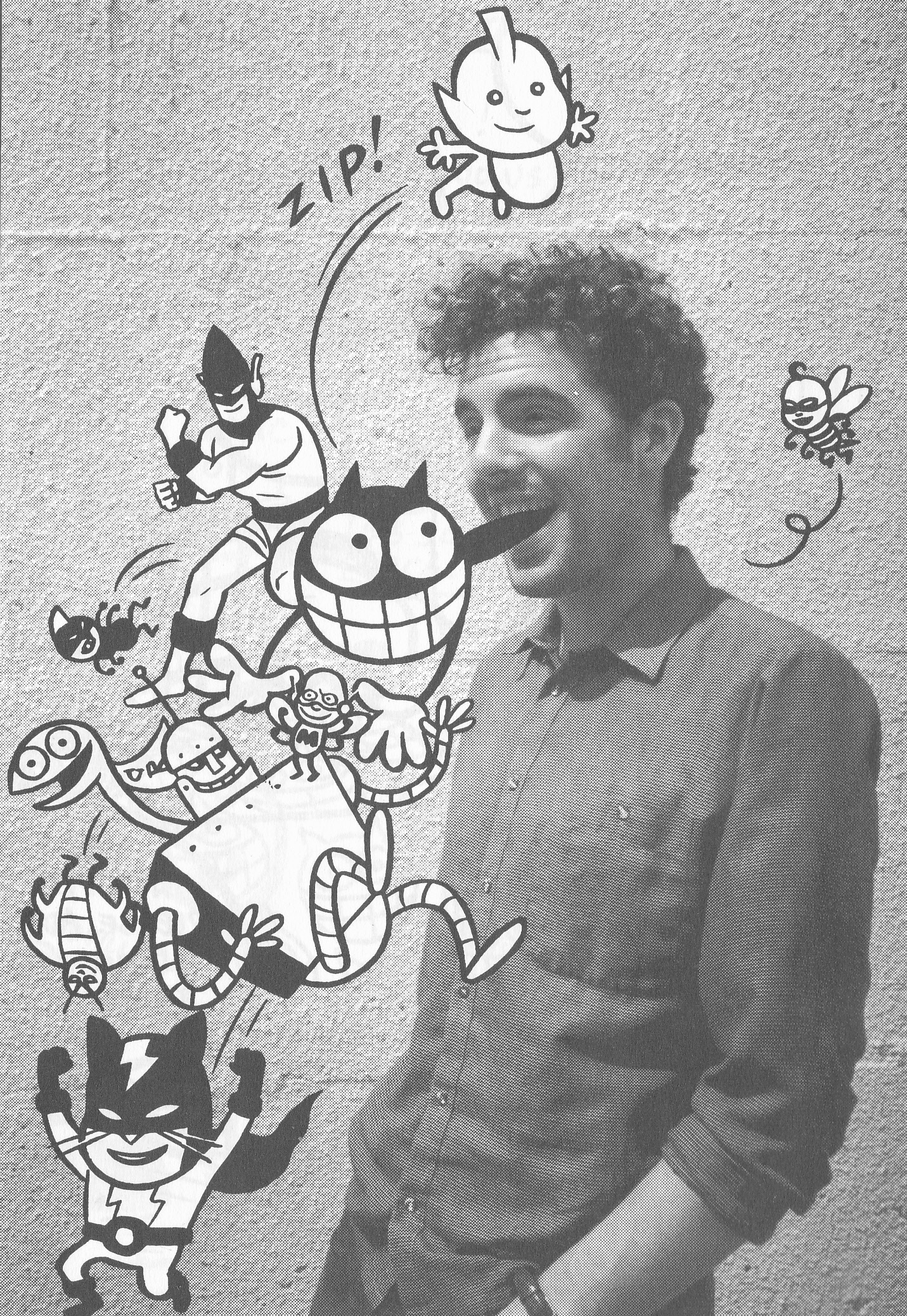 His first published effort was the cartoon strip “Oddville” which appeared in the alternative newspapers, Motive, [Guelph], Voice [Montréal], Nu-City, [Albuquerque], Mad Planet, [New York], and The Stranger [Seattle]. These strips were collected into Oddville: The Complete Strips, published July 1996 by Art Ick Productions, of Guelph. It has since been reprinted by Oni Press and Adhouse Books.

In 1992, a whole new set of his creations appeared in the graphic periodical SIN published by Tragedy Strikes Press. We are introduced to “Land of Nod”, “Badman”, “Sinister horde” in addition to an array of quirky other characters and stories. See the GALLERY below. All of these serials and stories were loosely connected. The suggestion was they were all dreams out of the head of Jason. The title of the periodical is a comment on Jason’s playfulness and ambiguity. Does he want us to take the title at face value, although there is little “sin” in the periodical. Is this a play on his signature which is “SIN”. Or, is both the title and his signature taken as suggested in the “Letter Section” from the first three letters of “sincerely” and is a short form for “sincerely Jason”.

With the conclusion of SIN 5, the series was restarted as SIN Comics, now published by Black Eye Productions probably a reconstructed Tragedy Strikes Press. “The Land of Nod” survived into the new periodical but the serials “Badman” and “Sinister horde” were replaced by a single new serial called Tales of Atomic City featuring “Big Bang”. Had Jason tired of them? Were they only exploratory features in the first place? They show neither the accomplishment nor confidence that the new serial shows with its bold lines and sharply contrasting blacks and whites. Were these dropped serials actually some of Jason’s very early efforts gathered into SIN? Is SIN Comics actually a reflection of his then current work?

Perhaps the best application can be found in the evolution of Jason’s use of his own persona in these features. Jason opens SIN, 1, with a page introduction in which his character “Nod” saws open his head to show us what’s inside. What follows is a “Land of Nod” episode. The next episode, introduces us to “Badman” who is Jason in costume. What follows throughout the SIN issues is an ambiguous mixture of autobiography and imagination. Apparently “Badman’s” first cartoon effort “Coxwell the Badly Drawn Ghost” refers to Jason’s own first effort. “Badman” relationship to “Superb Woman” including his confession about being a cartoonist followed by absurd justifications, seems to be an absurdist comment on Jason’s own relationship with the woman he loves and his nervousness about confessing that he’s a cartoonist. Was the wedding gift to “Badman” and “Superb Woman” of “Taboo” a cat, a real wedding gift to Jason and his wife? In the same issue, in the two page episode “The Origin of Nod” Jason returns to his opening concept of an interaction between himself and his character. In the last issue of SIN both Jason and his character “Badman” appear in a final story. Jason the cartoonist bookends the story while his alter ego “Badman” fights Jason’s other cartoon creations.

The SIN series ends and so does “Badman”. In the first issue of SIN Comics, Jason returns to the way he began SIN with a cartoon representation of himself battling his own creations. The two episodes presented are bookends to the stories in which Jason doesn’t appear. In the second issue of SIN Comics, Jason presents himself in a separate story that appears to be autobiographic. For reasons given below SIN Comics was replaced by Atomic City Tales. In this series Jason develops the final incarnation of himself. The cartoon version of himself that appeared in separate stories in SIN Comics is now integrated into the main story “Atomic City Tales featuring Big Bang”.

As stated above, the short lived mutli-serial forty page SIN Comics was replaced by the single storyline twenty-four page Atomic City Tales. In SIN Comics, 2, Spring 1994, we get a glimpse of why this happened. In addition to the SIN Comics , he was still working on the cartoon strip Oddville and had added a full colour serial called “Bug Patrol” for Nickelodeon Magazine. He was writing animated shorts for a children’s sketch comedy show called Squakbox which appeared on YTV a specialty channel owned by Corus Entertainment. He was illustrating covers for The Stranger. The work load was too heavy.

“Jetcat” for Nickelodeon’s KaBlam. He was also the creator behind the animated series, Tutenstein and Secret Saturdays, as well as producing animated features for Squawkbox. He has received two Emmy Awards, been nominated for Eisner Awards several times, Reuben Awards twice and Annie Award once.

From the beginning Jason created communities of characters. Yes DC and Marvel have created “worlds” but in their cases those worlds revolve around a few heroes. In the case of Jason, the “worlds” are true communities in which all characters are given more or less equal time. Sometimes the presumed central characters disappear for a time.

Visually Jay’s strong lines and stark backs and whites with no shading creates a strong visual impact for this serial.

Another Jay creation “Arrowhead” first appeared in True Patriot: All New Canadian Comic Book Adventures in 2013. with a follow up in True Patriot: Heroes Of The Great White North, 2014. Chapterhouse reprinted the first episode in True Patriot Presents, 1, Nov. 2016 with the intention of continuing the series which apparently did continue online but cannot be found. Sometime later, “Arrowhead” was then resurrected for Owl magazine, but the tone was quite different.

He has participated in “The North Wing Project”.

The Land Of Nod Treasury. Black Eye Productions, Nov. 1994. A collection from SIN and SIN Comics.

Welcome to Oddville. Adhouse Books, May 2011. Complete strips from Brand New Planet and the Toronto Star.

Canadian Notes & Queries,102, Summer 2018: “The North Wing: Selections from the Lost Library of 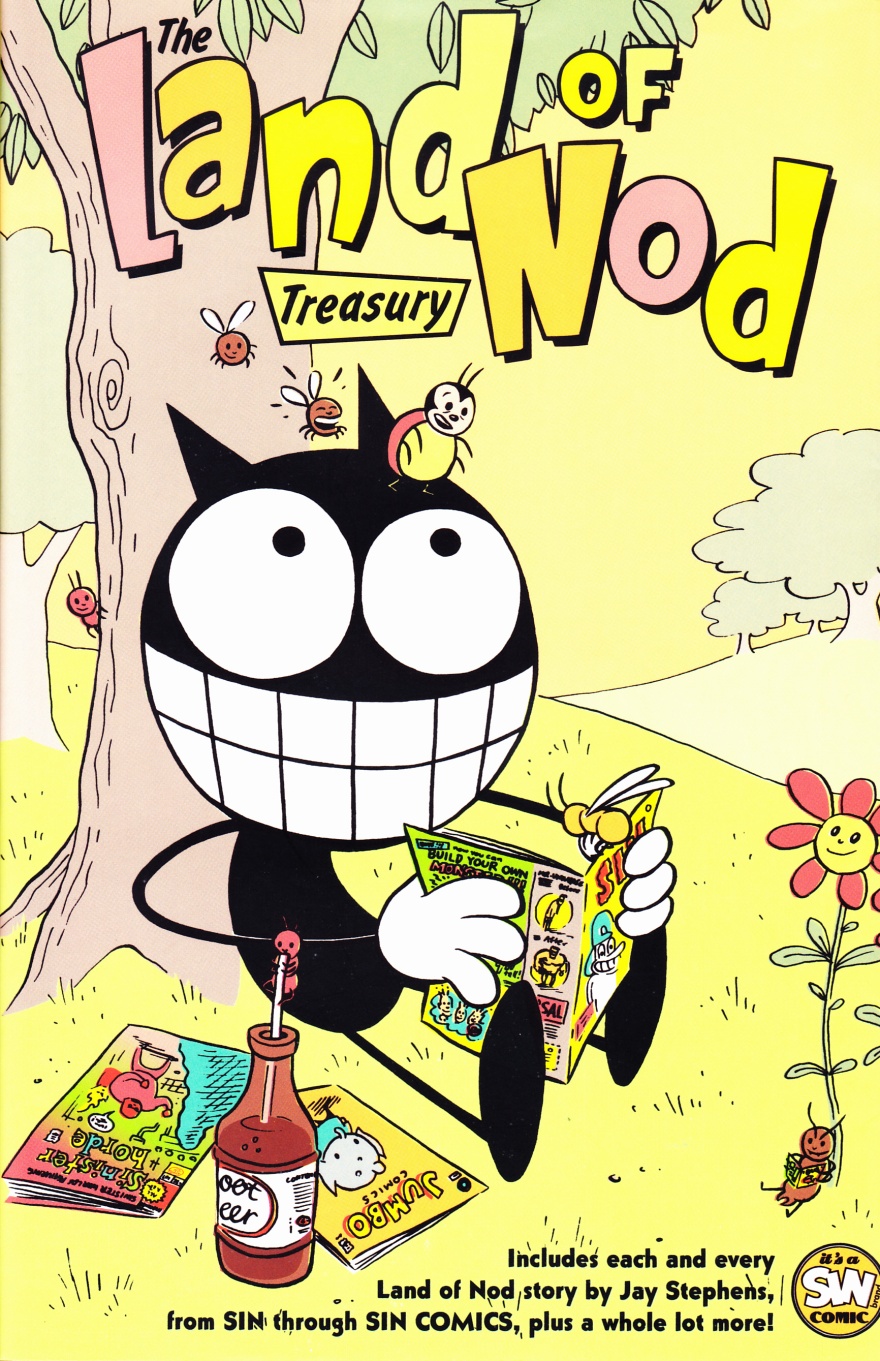 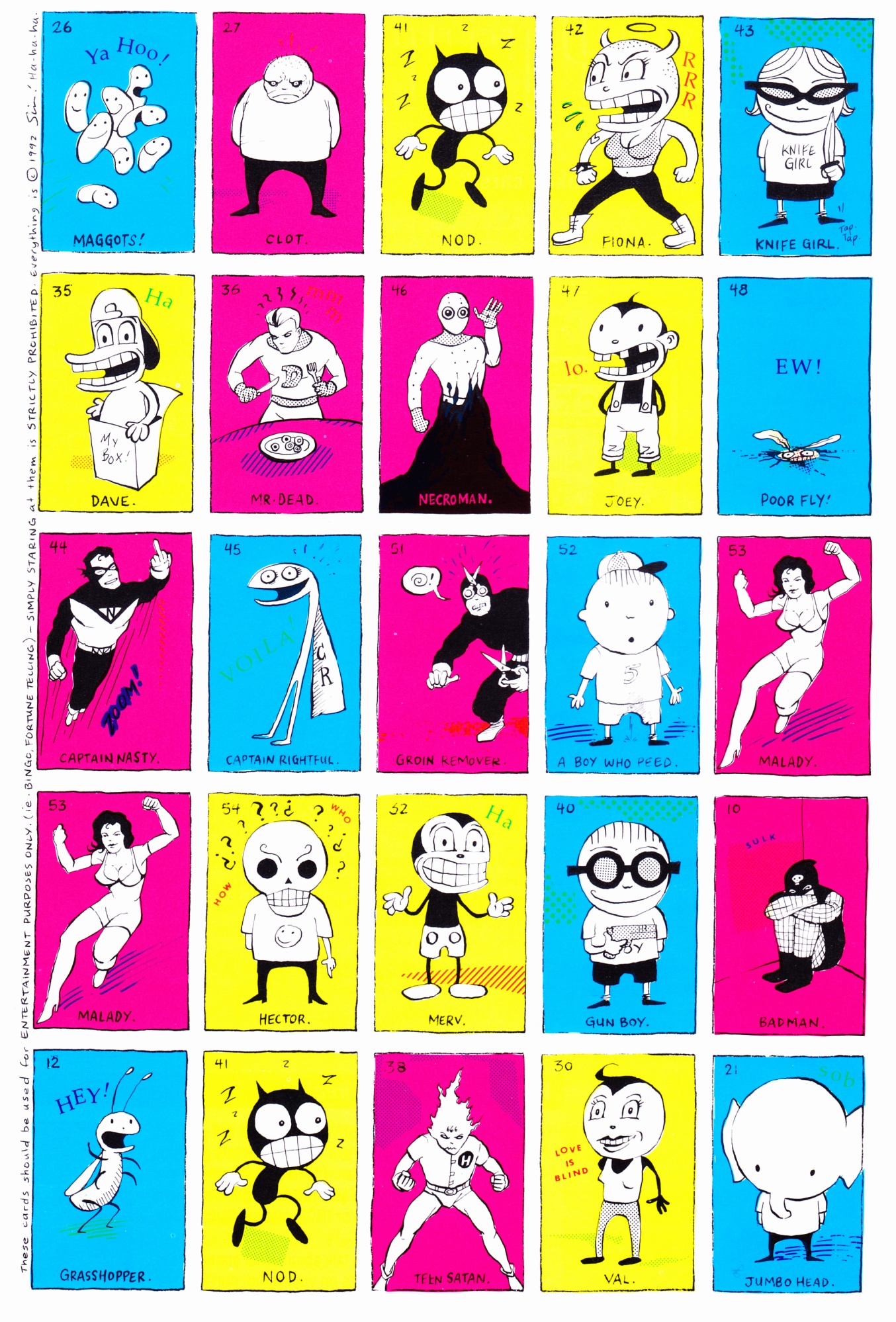 The multitude of characters that appear in SIN. SIN 4, Dec. 1992: Back cover. 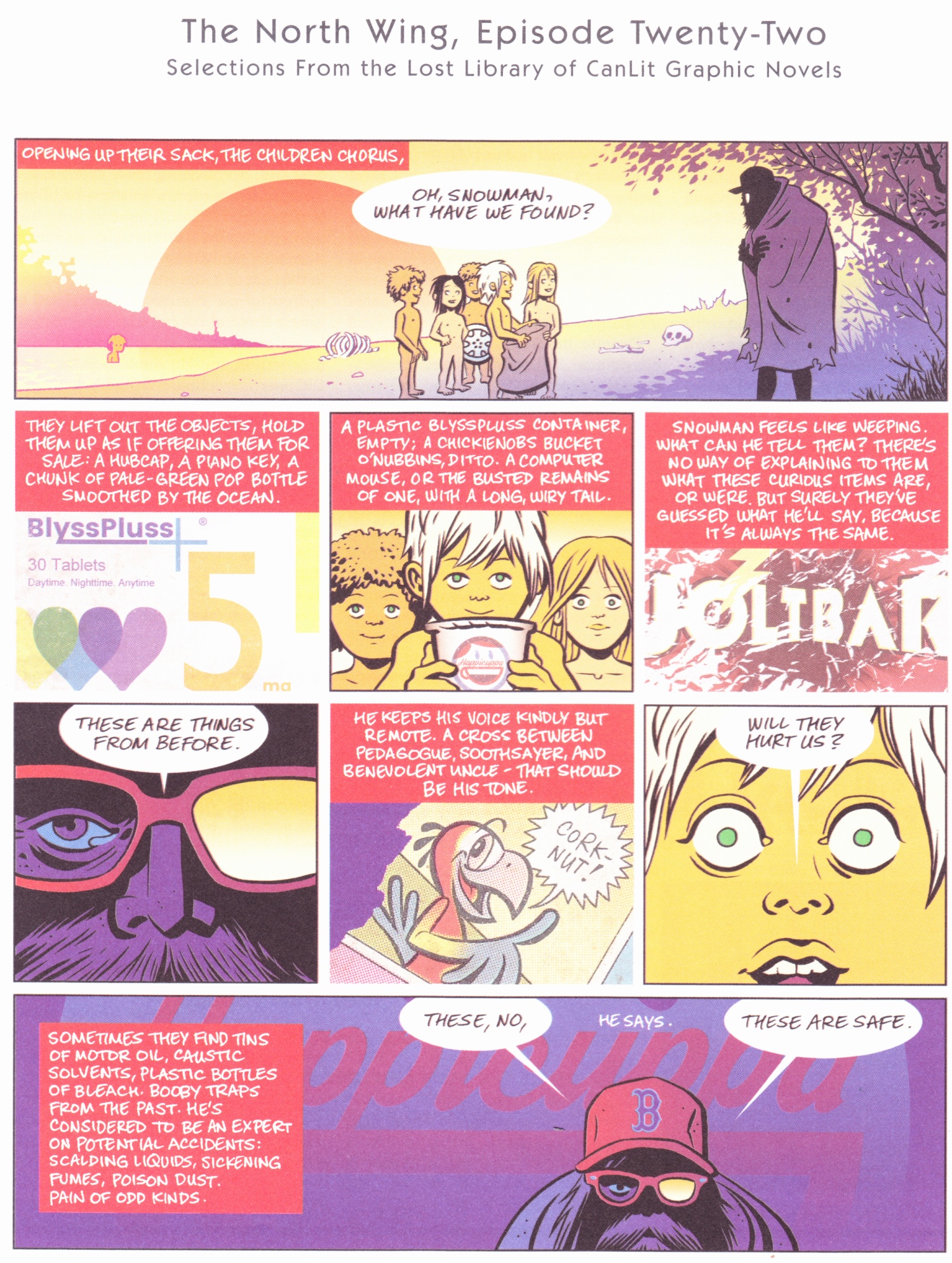 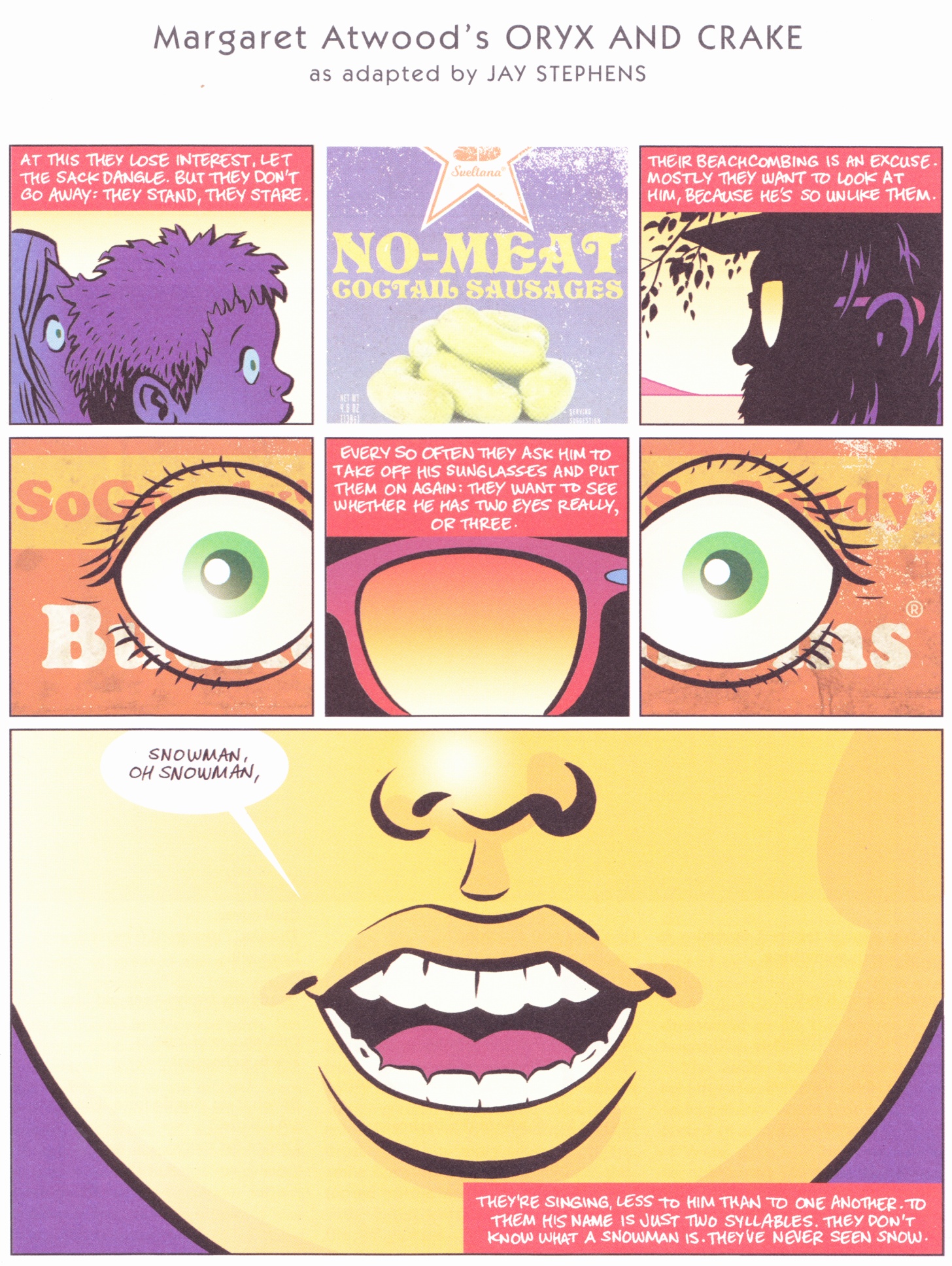