A group of Canadian superheroes created by John Byrne for Marvel Comic Group..

Alpha Weapon, later called “Vindicator” (his powers came from his suit) first appeared in “Home Are the Heroes” X-Men, 1-109, Feb. 1978. The story was written by Chris Claremont and illustrated by John. “Alpha Weapon” (“James MacDonald Hudson”) attempted to capture “Wolverine” who had been his protégé and a member of a Canadian service.

Next “Sasquatch” appears in The Incredible Hulk King-Size Annual, 1-8, 1979. John Byrne and Roger Stern were the writers; Sal Buscema and A. P. Alcala were the illustrators. “Sasquatch” fights “Hulk”. We find that “Dr. Walter Langkowski” has developed the ability to change into “Sasquatch” at will.

“Alpha Flight” then appeared in a two-part story “Something Wicked This Way Comes!” X-Men, 1-139, Nov. 1980, and “Rage” X-Men, 1-140, Dec. 1980. “Wolverine” returns to Canada to make peace with “Vindicator” and becomes involved with “Vindicator”, “Snowbird”, and “Shaman” in a battle with the evil “Wendigo”. John Byrne was plotter and illustrator. We are given more of the history of the relationship between “Wolverine” and “Vindicator” and we learn that “Wolverine’s” name is “Logan”. At the end of the story “Alpha Flight” is disbanded by the Canadian government.

In a two-part story in Marvel Two-In-One, 1-83, Jan.1982, & 1-84, Feb.1982, by writer Tom DeFalco and illustrator Ron Wilson, “Alpha Flight” appear with the “Thing”. In part 1, the “Thing” comes to Canada for help from “Walter Langkowski” (“Sasquatch”) who is in the north with “Michael Two Horse Men” (“Shaman”) discovering the sacred tomb of an ancient shaman. “Sasquatch” and the “Thing” meet and battle while “Shaman” is psychically compelled to release the evil shaman “Ranark”. “Sasquatch”, “Shaman” and “Thing” then join forces to stop him. Part 2 opens with “Vindicator” joining the group though he is still a reluctant super hero. He asks for help from the twins “Aurora” and “North Star”. “Aurora” (“Jean-Marie Beaubier”) responds but her brother Jean-Paul doesn’t because he feels he has been used by the government while in “Alpha Flight” which is now disbanded. A battle with “Ranark” ensues. A new power in “Vindicator’s” suit is revealed. It can stop his motion while the earth’s motion and everything on it continues. “North Star” finally joins the battle. Brother and sister achieve a blinding burst of light by touching each other. “Ranark” is subdued and “Shaman” casts a spell over him permanently incapacitating him.

A Prehistory of Alpha Flight as related by John Byrne in The Art of John Byrne: 7-8.

When at art college Byrne created a character he called the “Sentinel”. This character became the “Guardian” who evolved into the “Centurian” Byrne left the idea for a while then resurrected him as “Vindicator” The original costume design was very similar to that developed by Richard Comely for “Captain Canuck” and so Byrne changed his design to a wrap around Canadian flag style. Byrne then developed “Sasquatch” as a kind of Canadian “Hulk”

The group’s powers came from various sources. “Vindicator’s” came from his suit. “Sasquatch’s” were gamma ray induced but “Langkowski” was able to control them. The Francophone Canadians “Aurora” and “North Star” were mutants. Snowbird was a shape changer who got her powers from Nelvana of the North Lights. This was a salute to the Canadian heroine created by Adrian Dingle in the 1940’s. “Shaman” obtained his powers through witchcraft. 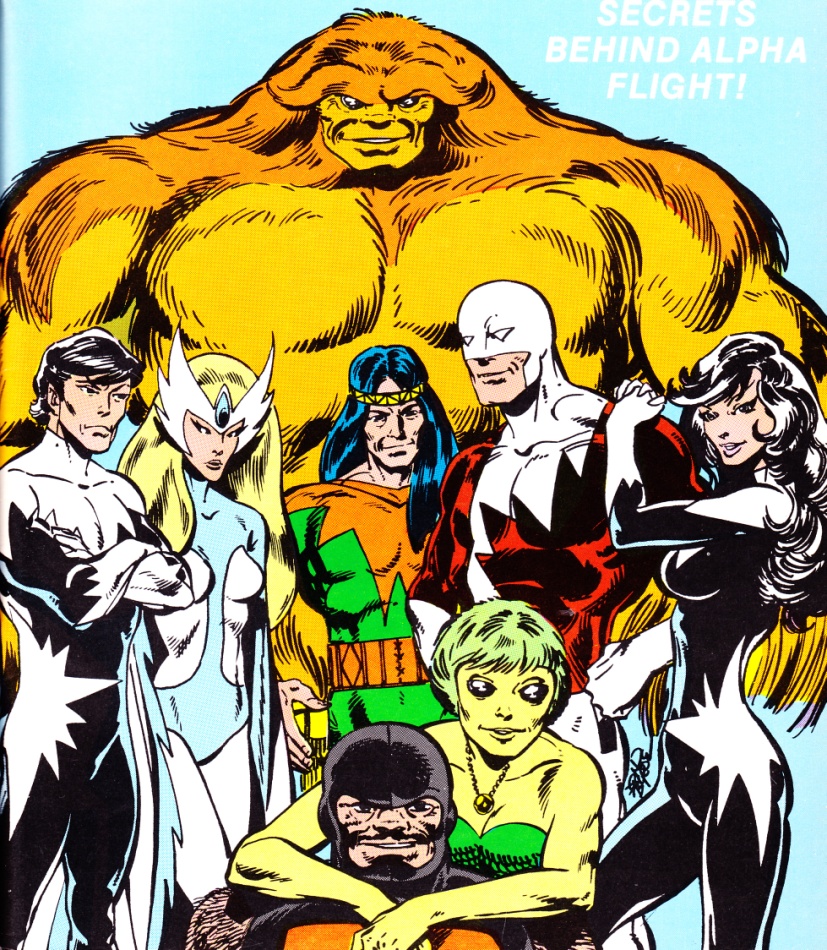