According to issue 4, “Warlock 5” was principally the concept of Gordon Derry with help from Denis Beauvais.  For these authors, the primal force that binds the universe together is called “Warlock Fire”. This kept the universe moving “along its singular path of evolution and expansion”. A disturbance (wisely undefined) splintered the universe into “alternate time streams”. These “time streams” meet in “ a vortex of whirling chaotic energies” which are “shaped in a five-pointed Grid”. There are five connections between this grid and twentieth century earth. Each connection or “Portal” has one terminus under an intentionally unnamed North American city and the other terminus in the world of another “time stream”. Eventually the universe will balance again and the time streams will merge so that only one Portal of the Grid will remain, the others fading away. “In essence, the struggle to be the dominant Portal is the struggle to control the Grid is and as a result the destiny of the universe.”

This struggle is carried out by the five Guardians of the five Portals. They can pass freely between the unnamed city on present day earth and their particular “time stream” world. These Guardians were not chosen but accidentally entered a Portal and became connected to it. Drakalis Savashitar Y’ul comes from a moon of Jupiter in a far future world. He is the result of interbreeding between a race of highly developed humans and a race of “wise and mystical dragons”. His world is one of peace and tolerance. Prince Doomidor rob-Kallus comes from ninth century North Runeland Skandazia a medieval world where dominance is sought and violence results. AR-G642/ON325-9 Argon is a “cyberdriod” created by humans on the last deep space probe “near the Serpent’s Eye Galaxy in the 34th century as humans wiped themselves out in war. It evolved and refined itself over three centuries. It believes humans are destructive and at least must be controlled. Tanith Yolanthia Domnael is a “White Sorceress” from O”Domnael Castle in the Blue Isles 10th century Europa. She is dedicated to non-violence and co-operation which makes her a natural ally to (and lover with) Savashitar. Zania Nervana is the exact opposite to Tanith, a splintered personality prone to violence. Unlike the others, she is a present day earthling who stumbled through a portal into an alternate time stream. Because of their connections to a portal these five guardians have become immortal with one exception. They can be killed. The stories in the 13 issues involve conflict between these five  for dominance. The general population are unaware of their conflicts until issue 7 when an ill-advised plan by Argon to kill Doomidor reveals their existence. A parallel story of the tensions that develop between Savashitar and  Tanith resolves itself in issue 13 with both of them realizing that dominance will not work, no Guardian is capable to controlling the Grid alone that they must all work together.

Where this insight would have led remains a mystery as Gordon and Denis left Aircel and the project, abruptly according to the account in issue 15. The reasons are not given but with many loose ends to tie up, it cannot be because the story was complete.

After  issue 13, “Warlock 5” essentially ceased to be. Barry Blair now claimed to be the creator even though the previous 13 issues gave creator credits to Gordon and Denis. Charles de Lint a successful fantasy writer based in Ottawa was given writer chores, but after only two issues Barry joined him as co-writer then after two more issues Barry was the sole writer. The visual style became unstable as a variety of visual artists were assigned to the periodical in different combinations at different times. Finally, as Barry’s control of the concept became complete,  it fell into the Barry Blair style found in  “Elflord” and “Samurai”.

The story line rapidly lost all continuity with the first 13 issues. The first abrupt discontinuity occurred immediately in issue 14, when the unnamed North American was named “New York”. More significant, a new character “Kaji” who is “Spirit Of The Grid” was introduced. She takes over more or less as the central character and the original five become subordinate. This change eliminates the central theme of “Warlock 5” which was how do five disparate personalities accidentally thrown together in a circumstance eventually resolve that situation among themselves. Ultimately in Barry’s hands   “Warlock 5” became into  little more than a samurai story with soft core pornography overtones.

The popularity of  “Warlock 5” rests on the first thirteen issues. The rest is of little interest. 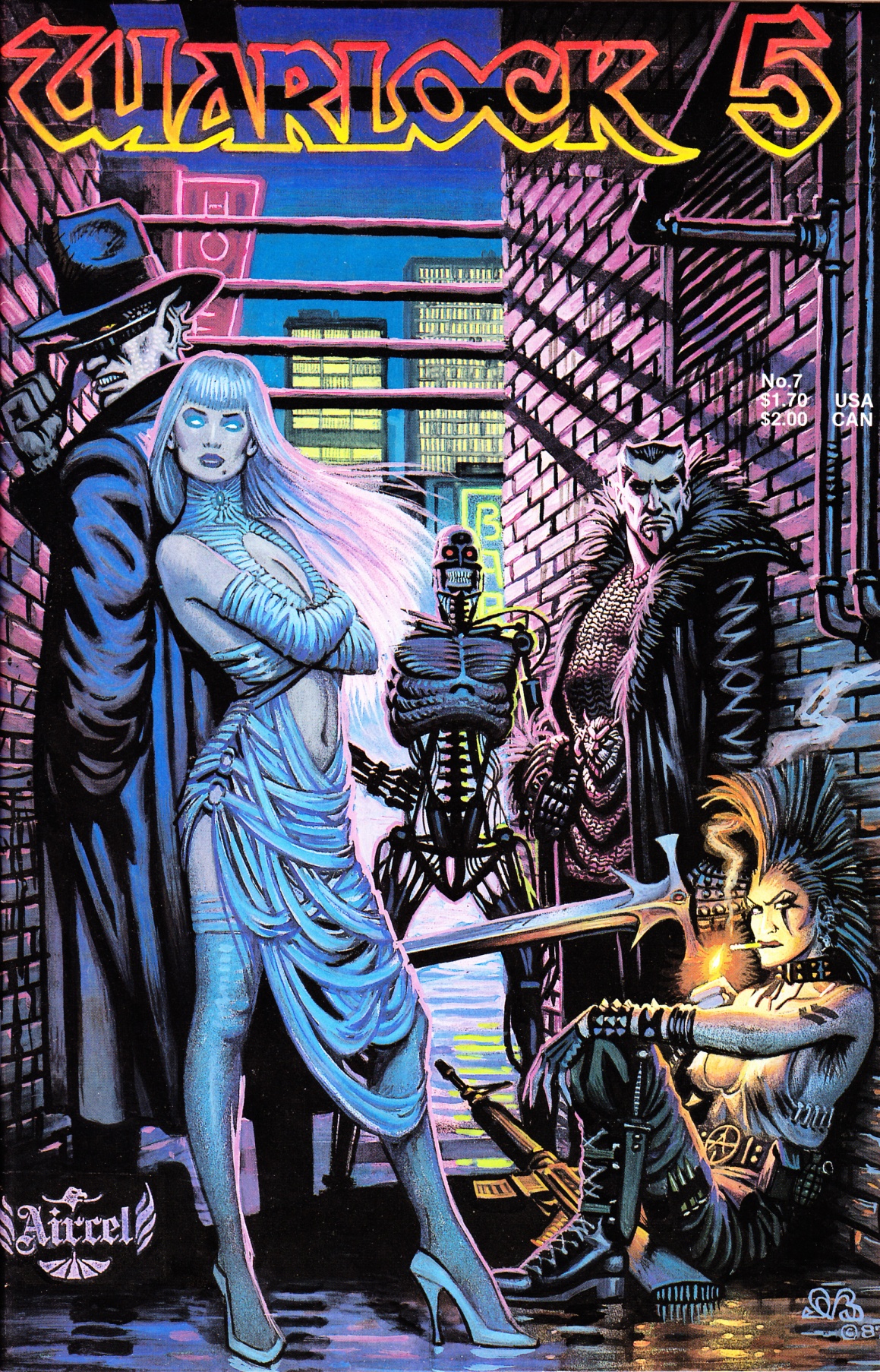 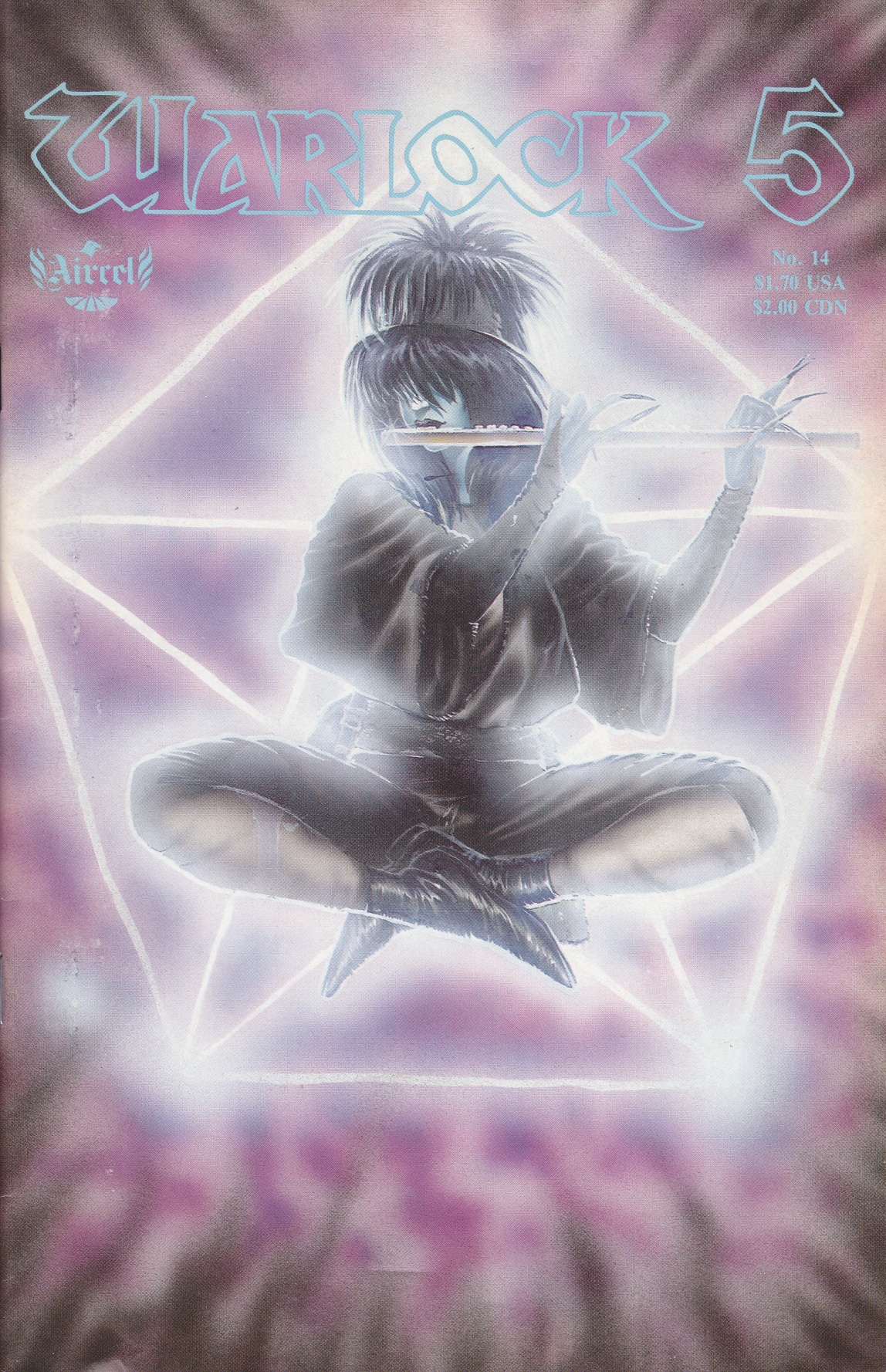 Kaji, Spirit of the Grid. This unidentified cover is interesting in that it’s subject has nothing to do with what went before and the style is unlike anything that comes after. Warlock 5, 15-1988: Front cover.