James Nathaniel Simpkins, born 26  November 1910 in Winnipeg. was the creator of “Jasper The Bear,” a regular cartoon feature of Maclean’s magazine for about 24 years and the mascot of the Jasper National Park community in Alberta.

James studied at the Winnipeg School of Art and his first job was as a commercial illustrator for the Hudson’s Bay Company’s Beaver Magazine. During World War II, he joined the army medical corps as an illustrator and after the war in 1945 he joined the National Film Board as a staff artist where he worked for sixteen years. After becoming a freelancer, he continued to be a regular contributor. Although he drew strip films “.. which are like cartoon strips you can project on a screen …” he never put Jasper on film.

His endearing “Jasper” character first appeared in Maclean’s magazine as an unnamed character on 1 December 1948. At least partly because of the doctor’s bills piling up  James had “headed for Toronto in the fall of 1948 to show Maclean’s editors a group of his cartoons. As he recounts, “The art editor asked if I would try to develop an animal character that would be distinctively Canadian (‘but no Bertie-the-Beavers, please’) and suggested I rough out thirty-five samples as a start. We agreed it should be a bear and I went home to my sketch pad until I had thirty-five bear jokes, of which the magazine accepted only six.” From that beginning the character became a magazine fixture.

In addition to Jasper, Simpkins did monthly cartoons for The Medical Post which were collected and published as When’s The Last Time You Cleaned Your Navel? He also freelanced with clients including the Toronto Star, magazines in Canada and the U.S., book publishers, and add agencies. He did the series “Simpkin’s Montreal” a cartoon feature three times a week  for the Montreal Gazette beginning 6 August 1962, and he was commissioned to do a Canadian postage stamp commemorating Canada’s world champion hockey players.

James has described his work place and home  as: “ a ten by twelve room up under the gingerbread eaves of a rambling Victorian house originally built eighty-five years ago as a summer home overlooking the St. Lawrence [River] at Beaconsfield near Montreal.”

In 1994 he was the recipient of the first Lifetime Achievement Award presented by the Toronto Cartoonists Society. On 14 May 2016, he was inducted into the “Giants of the North hall of fame operated by the Doug Wright Awards committee.

When’s the last time you cleaned your navel?” Potlatch Publications, 1976.

Shall We Join The Ladies. Toronto: PaperJacks 1972.

Maclean’s 27 April 1957 “With Jasper’s apologies to Tom Thomson and the Group of Seven.” 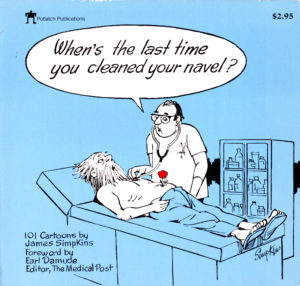 When Was The Last Time You Cleaned Your Navel: Front cover. 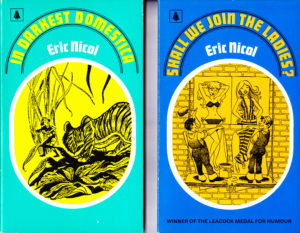