Robert LaPalme, was considered the Picasso of Canadian editorial cartoonists, (Hustak), and the leading cartoonist in Francophone Canadian in the 1940’s and 1950’s. (Hecklers) He worked for every leading Francophone newspaper, and for 25 years organized and was curator of the prestigious Le Salon International de la Caricature/Salon of Cartoons in Montréal. Because of his connections with cartoonists around the world he became known as “the ambassador of political cartoonists.” (242)

Born 14 April 1908, in Montréal, LaPalme spent his early years on a farm in Alberta, but returned to Québec in 1925. At seventeen years old he applied to l’Ecole des Beaux Arts but was refused, because it was considered he lacked talent. This is rather strange considering his later achievements.

He worked at odd jobs, a crucifix maker, a florist and an usher. All the while he sketched in his spare time. His brother bought him a set of drafting instruments, and with them he created twelve geometric caricatures of politicians that L’Almanach de la langue française published in 1933.

His first job as a cartoonist was drawing daily front page cartoons at $17 per week for the intellectual and political daily L’Ordre. As a result of this he became a popular figure in the société café of Montréal.

In 1934, a Paris newspaper, published some of the L’Almanach de la langue française caricatures, and a New York magazine inquired about commissioning some drawings. As a result LaPalme moved to New York where he worked for two years, as a freelance illustrator for Stage, The Nation, Ringmaster and The Philadelphia Ledger.

In 1937 he returned to Canada and began working for Le Droit in Ottawa but in 1938, he moved to Québec City to cartoon for l’Evenment Journal, l’Action Catholique and La Patrie. Ironically, about the same time, this l’Ecole des Beaux Arts reject became an assistant professor of art history at Univarsité de Laval.

In 1940, he was commissioned by army commandant Adolphe Dansereau to do murals for the drill hall. LaPalme prepared twelve cartoon paintings for the murals but before they could be executed Dansereau was replaced by Brigadier General Georges Vanier, who shocked by the cartoons cancelled the project. LaPalme took the cartoons to a small gallery in New York where they were praised in reviews. These works then returned to Canada to be exhibited for six weeks at the Montréal Museum of Fine Arts, and a Toronto Art Gallery. They were then included in an exhibition of Canadian war art in Brazil. Finally, they were shown in Rome and Paris where the exhibition was opened by then Ambassador Georges Vanier, apparently unaware these were the paintings and artist he had originally rejected.

In 1943, LaPalme returned to Montréal to work for Le Canada, although he continued to produce cartoons for L’Événement Journal, L’Action catholique and La Patrie. During this time he developed an international reputation as both a cartoonist and painter. He left Montréal for two years to study art in New York, exhibited at the Musée des Beaux-Arts de Montréal, at galleries in Toronto, Paris, Rome, and Rio de Janeiro.

In 1950 he joined as editorial cartoonist Le Devoir, which he called “… Québec’s last fighting newspaper…”. (242) It was there he made his reputation as a ground-breaking cartoonist. Here he continued to use his pen to conduct vitriolic attacks on Québec premier Maurice Duplessis, and for his efforts won a National Newspaper Award in 1952. It would appear this vitriol had an added edge caused by disillusion. According to The Hecklers, LaPalme enthusiastically supported Duplessis when he came to power in 1936 as a reformer. In addition, he was personally flattered that Duplessis commissioned him to do a cartoon of Ernest Lapointe, an important Federal politician, as a cracked chamber pot, for which Duplessis paid $25 for the original. LaPalme later recalled: “A long time after I grew up, the $25 he gave me was the image that made me understand the way he played politics. He bought people. I did everything to down grade that man.” (103-104)

Lapalme entered television as drawing caricatures and making commentaries. He joined La Presse in 1959 but soon moved to Le Nouveau journal to join the new editor and his old friend Jean-Louis Gagnon. It folded in 1962. In 1963 a turning point in his career occurred when he was appointed founding director of the annual Le Salon International de la Caricature/Salon of Caricature and Cartoon.

In 1963 it attracted 1200 entrants from sixty nations and later became the largest competition for professional editorial cartoonists of its kind in the world. It was held in Montréal annually from 1963 to 1988. In 1967 LaPalme painted three murals for the Expo World’s Fair which now hang in Montréal metro stations.

In 1972 LaPalme was made a member of the Order of Canada for his contribution to Canadian art. 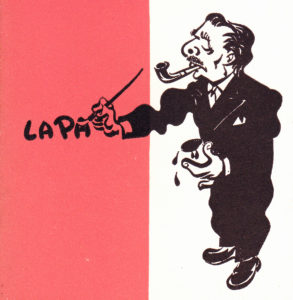 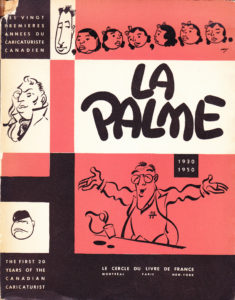