Punkinhead’s creation began when Eaton’s asked its employees to come up with a Christmas idea for the store to promote. Apparently an animal mascot was suggested. Eaton’s then approached Winnipegger Charles Thorson to design a character and “Punkinhead” was the result. Punkinhead appeared not only in the Eaton’s Santa Claus parades in various cities but also in parades mounted by the civic groups in other communities.

Punkinhead was introduced in the story Punkinhead: The Sad Little Bear. He lived in the forest called “Bear-Land” but he was different. Unlike the other bears, he had a large tuft of blond hair on the top of his head. Because of this difference he was laughed at, called Punkinhead and ostracized and so very lonely and sad. Nothing he did could get rid of this tuft. Just before a Christmas when Santa, the fairies, gnomes and elves, on their way to from the North Pole to Toyland (Eaton’s) they stopped for a visit and honey soda drinks at Bear Land. One of the clowns who was very important part of Santa’s Big Parade drank to many honey sodas and got a “tummy ache”. What to do? The Fairy Queen suggested that one of the bears take the clown’s special place in the parade. All of the bears tried to fill the role but the clown’s hat kept falling off each bears head. “’If only bears didn’t have such smooth heads on top’, said Jack Frost, ‘then the hat would stay on. Couldn’t the Fairy Queen wave her magic wand and make a lock of hair …? That would fix it…? The bears immediately remembered ‘Punkinhead, went to the other side of the forest where he was sitting and brought him back. The hat fit perfectly, and Punkinhead became an important part in the Santa Claus Parade (Eaton’s) in 1948, and was a regular feature thereafter.

He became much more than an addition to the parade. Each year following the first “Punkinhead” story, Eaton’s issued a booklet with another story gratis to the children visiting Toyland. Additional booklets were published and a whole range of merchandise, including wrist watches, clothing, furniture, decorator plates, toys became available.

In 1951, Bill Isbister, a prominent musician, conductor, arranger and songwriter based in Toronto, wrote “The Punkinhead Song” based on the original story. The sheet music was published by B.M.I. Canada Ltd. The recording presumably by Isbister sold 10,000 copies in the week before Christmas and 28000 in the three weeks after Christmas. It was later picked up by Wilf Carter for Victor, Ray Hetherington for Columbia, and Bill Long and His Ranch Girls (National Barn Dance program) for Capitol.

Part of the lyrics are: “No smile was on his [clown’s] face. They tried his hat on everyone, but none could take his place. Then, up stepped Punkinhead to try, and much to his delight, the mop of hair just held it there, the hat it fit just right. Now Punkinhead is having fun, he’s happy as can be.”

The Punkinhead Song and the Punkinhead story. Performer unidentified, T. Eaton Co, no date: TE 100/101. Narrates story on one side and sings song on other.) 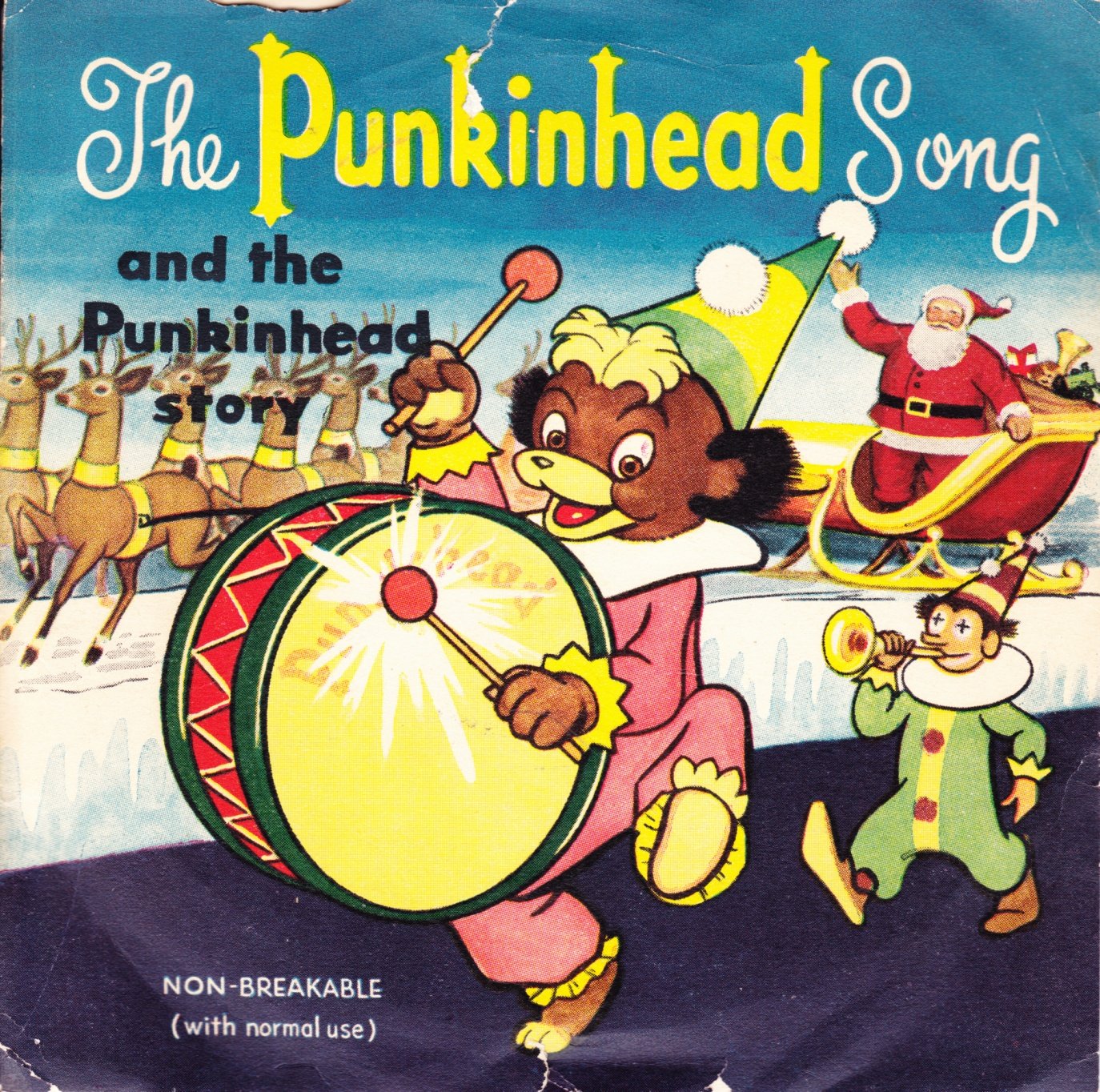 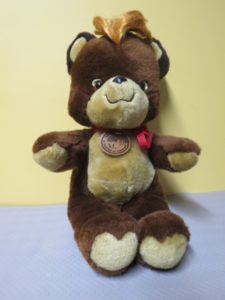 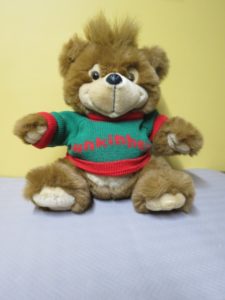 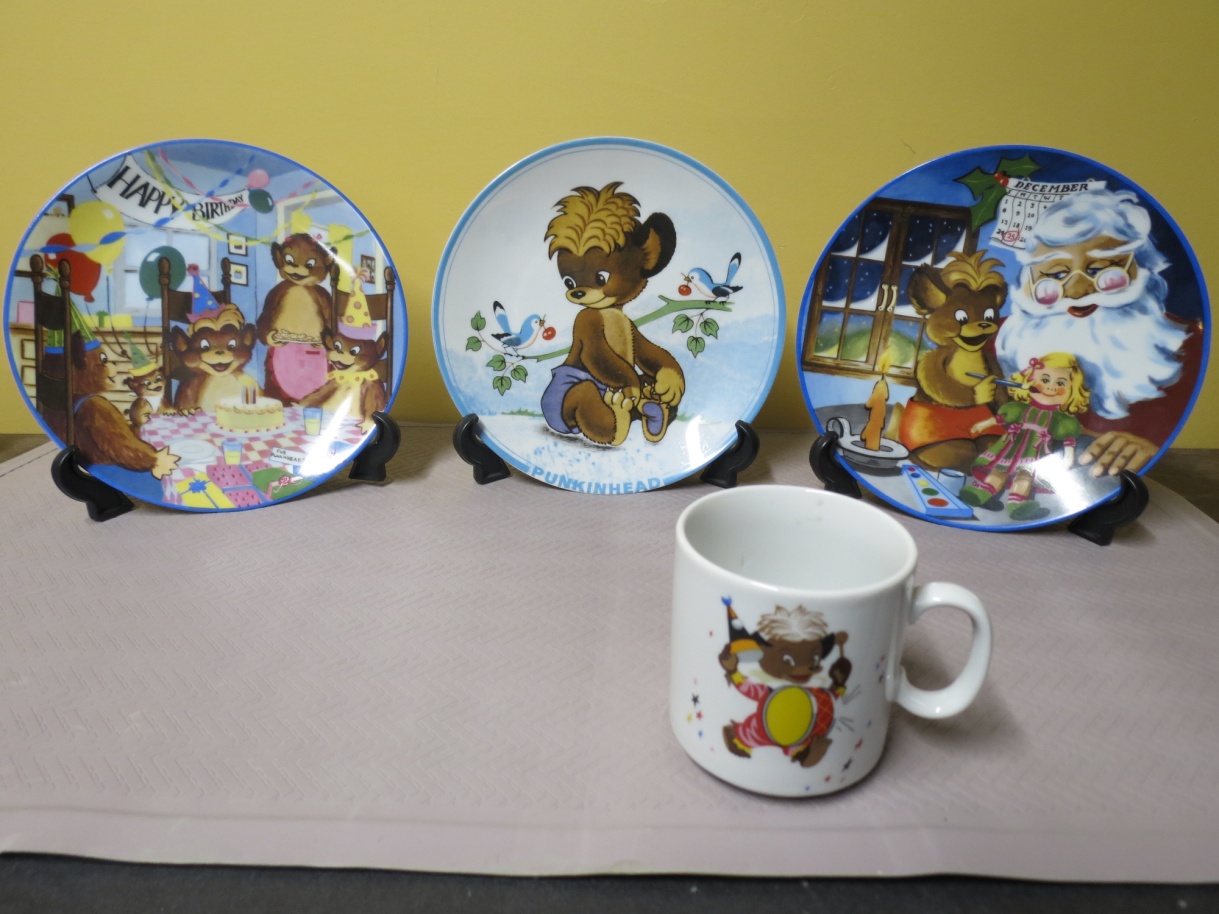 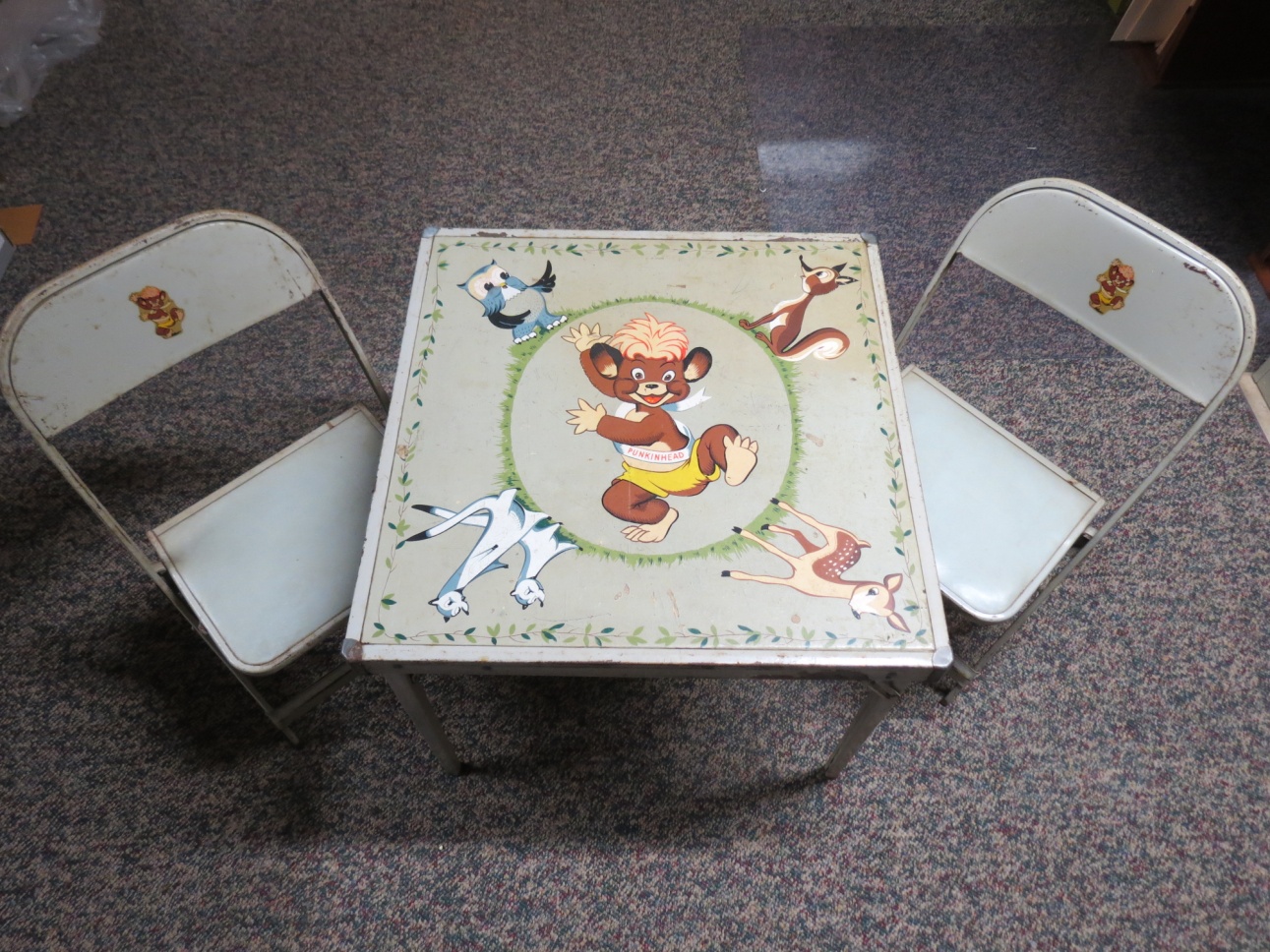 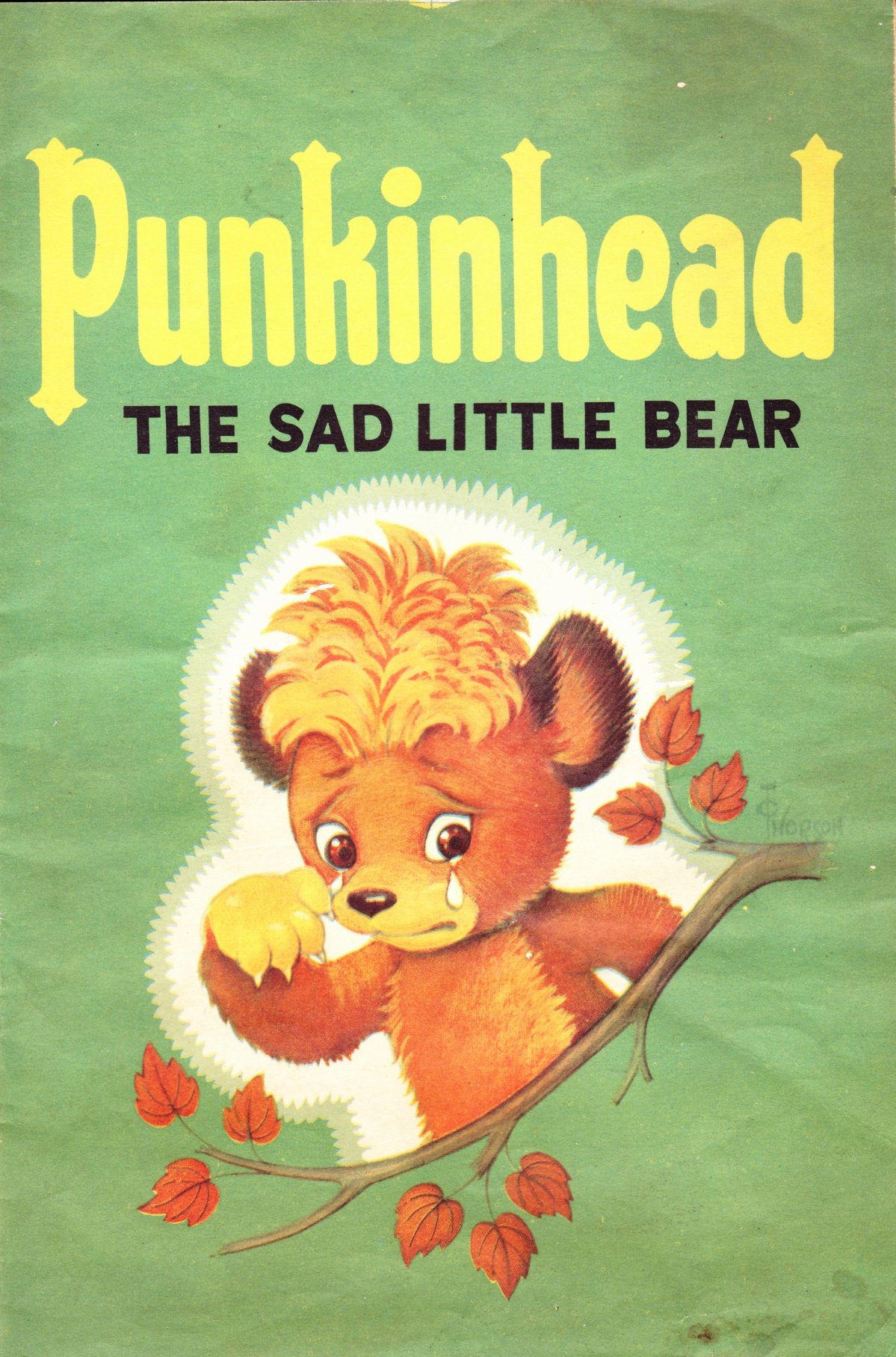 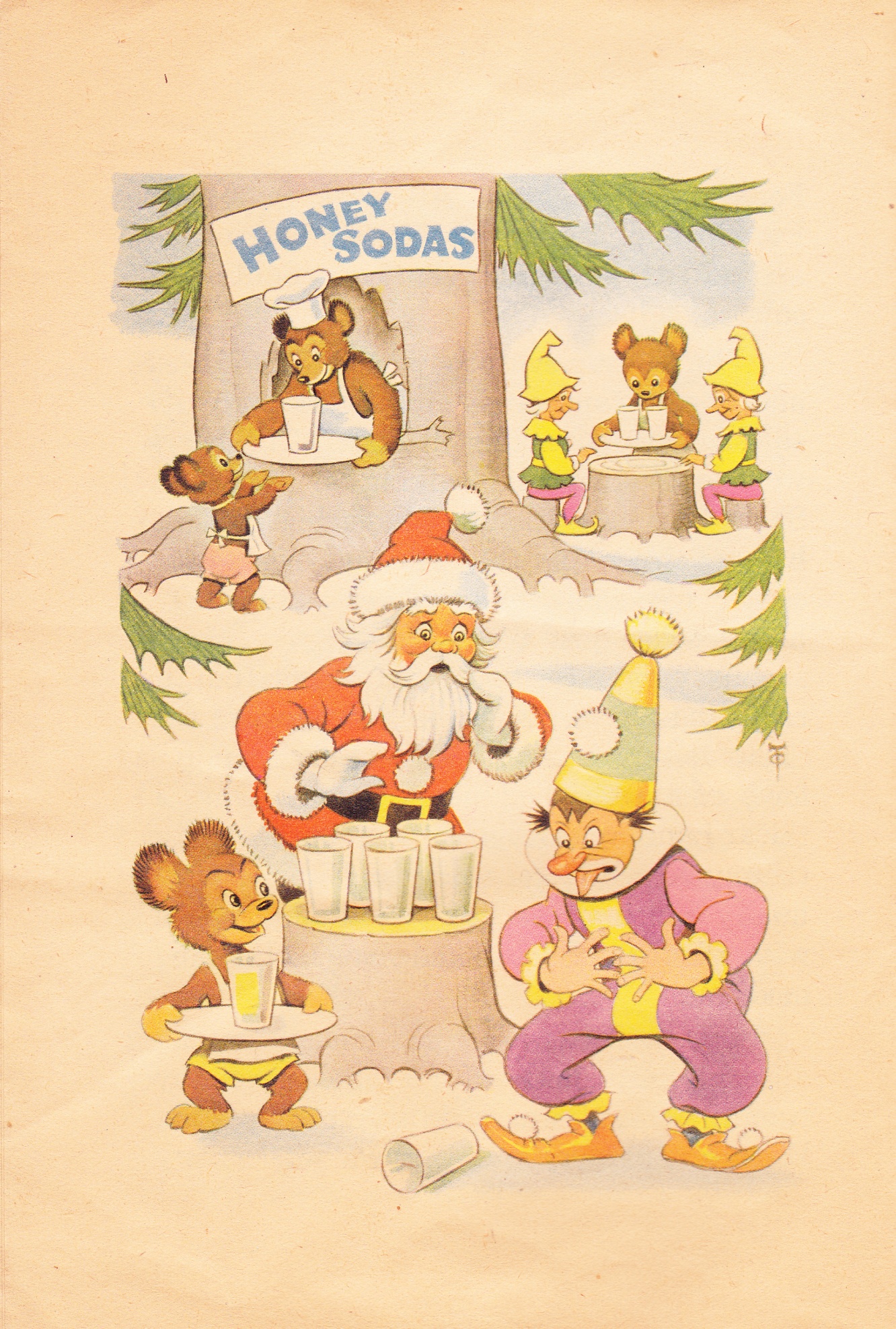 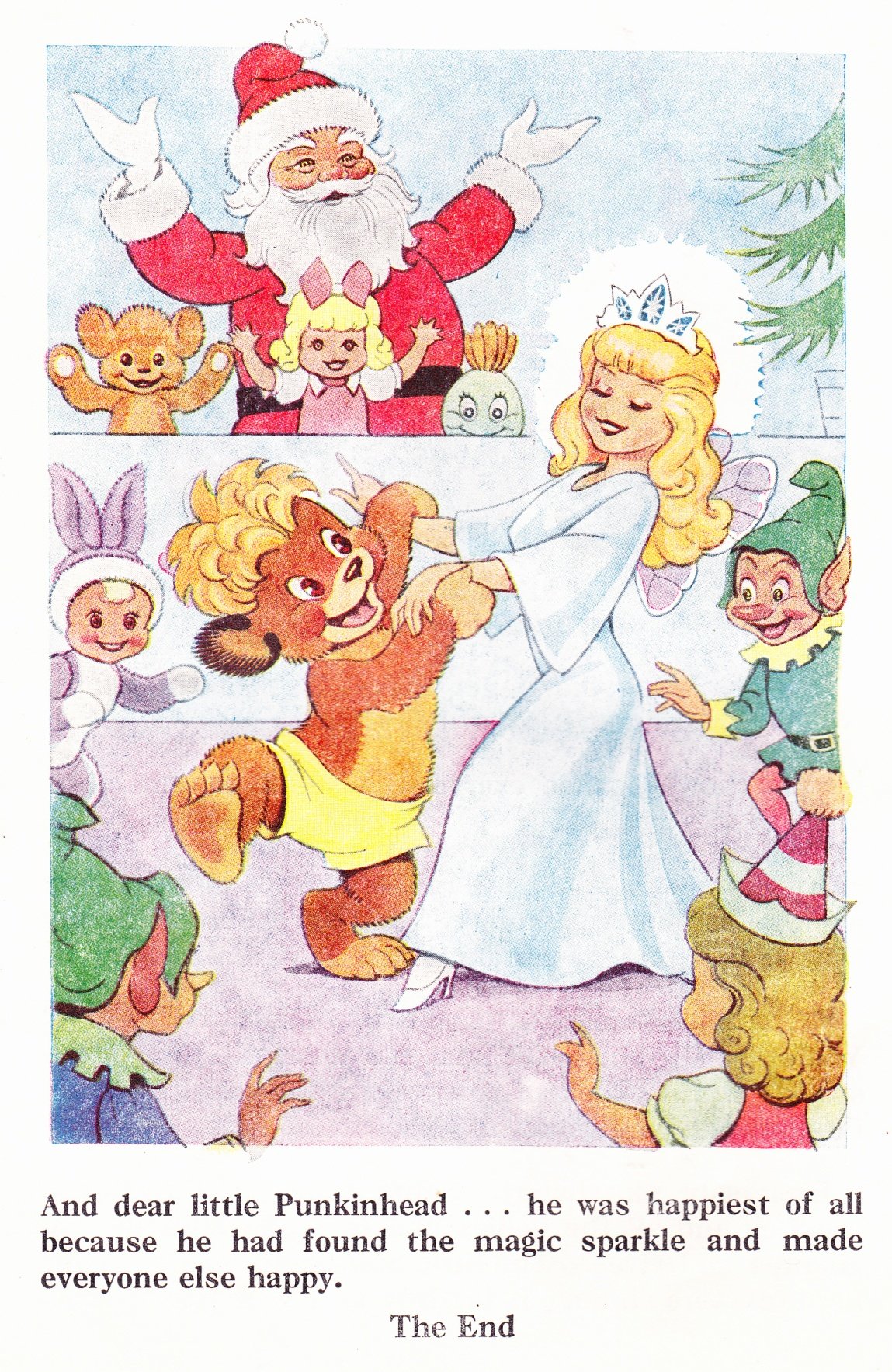 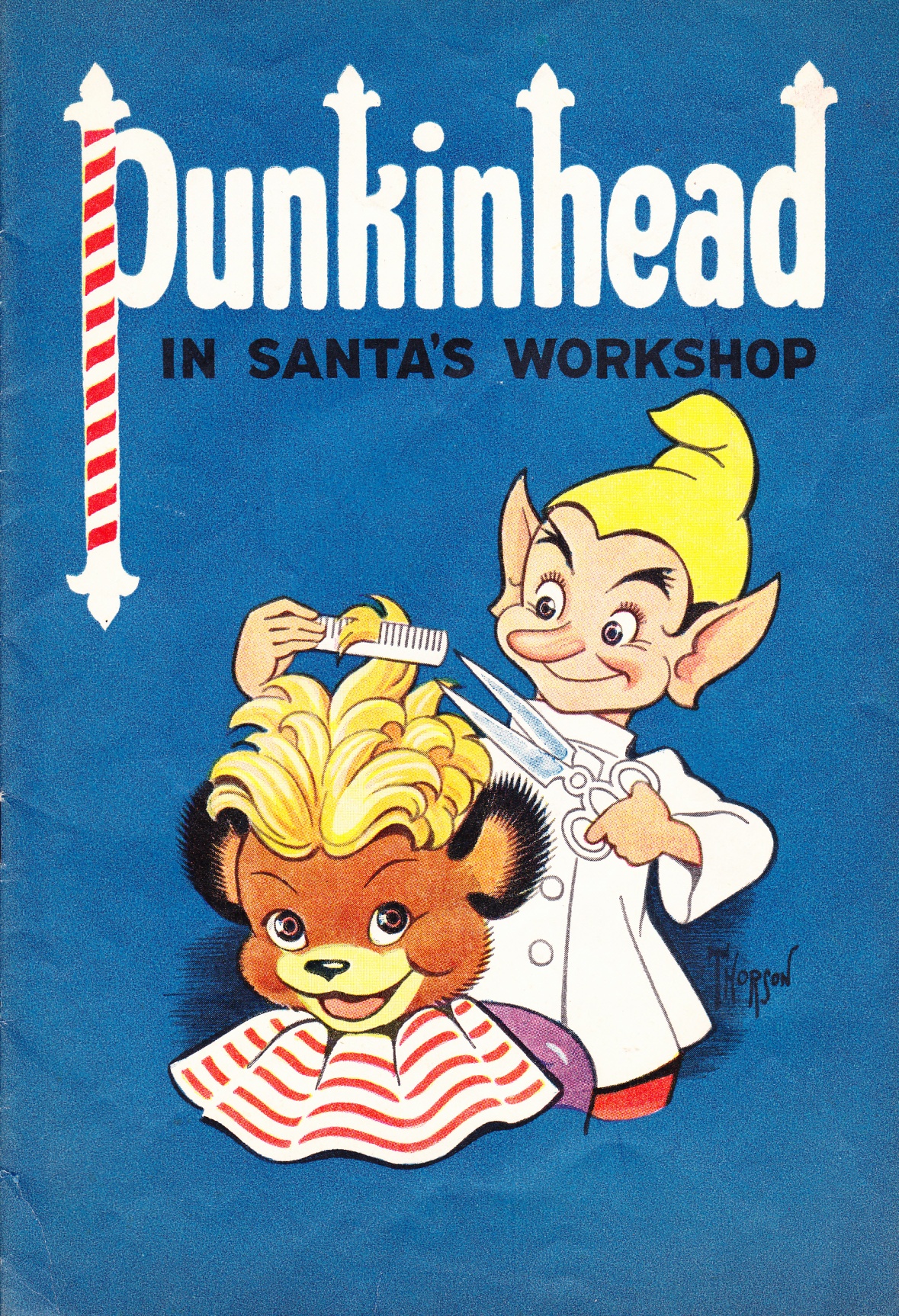 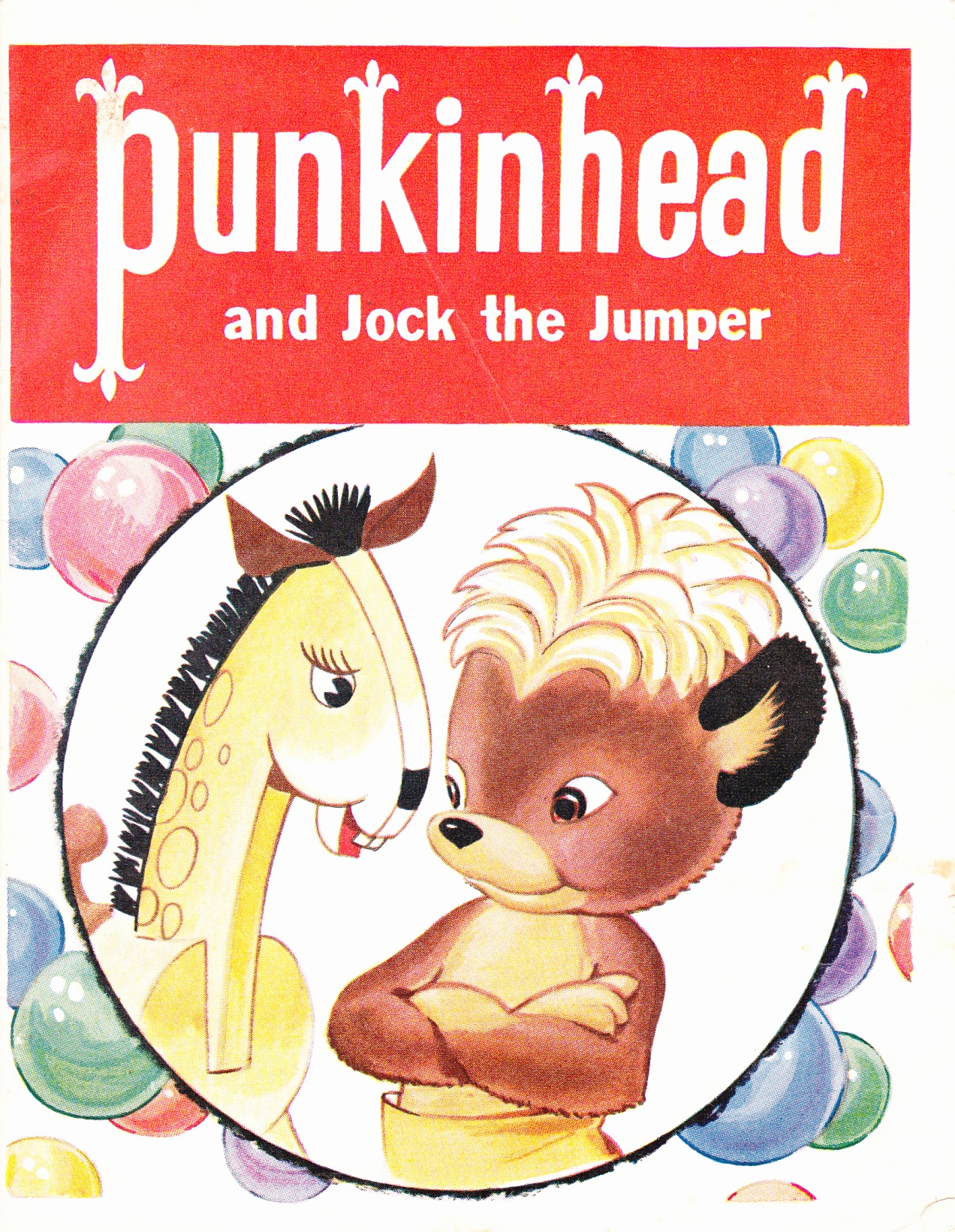 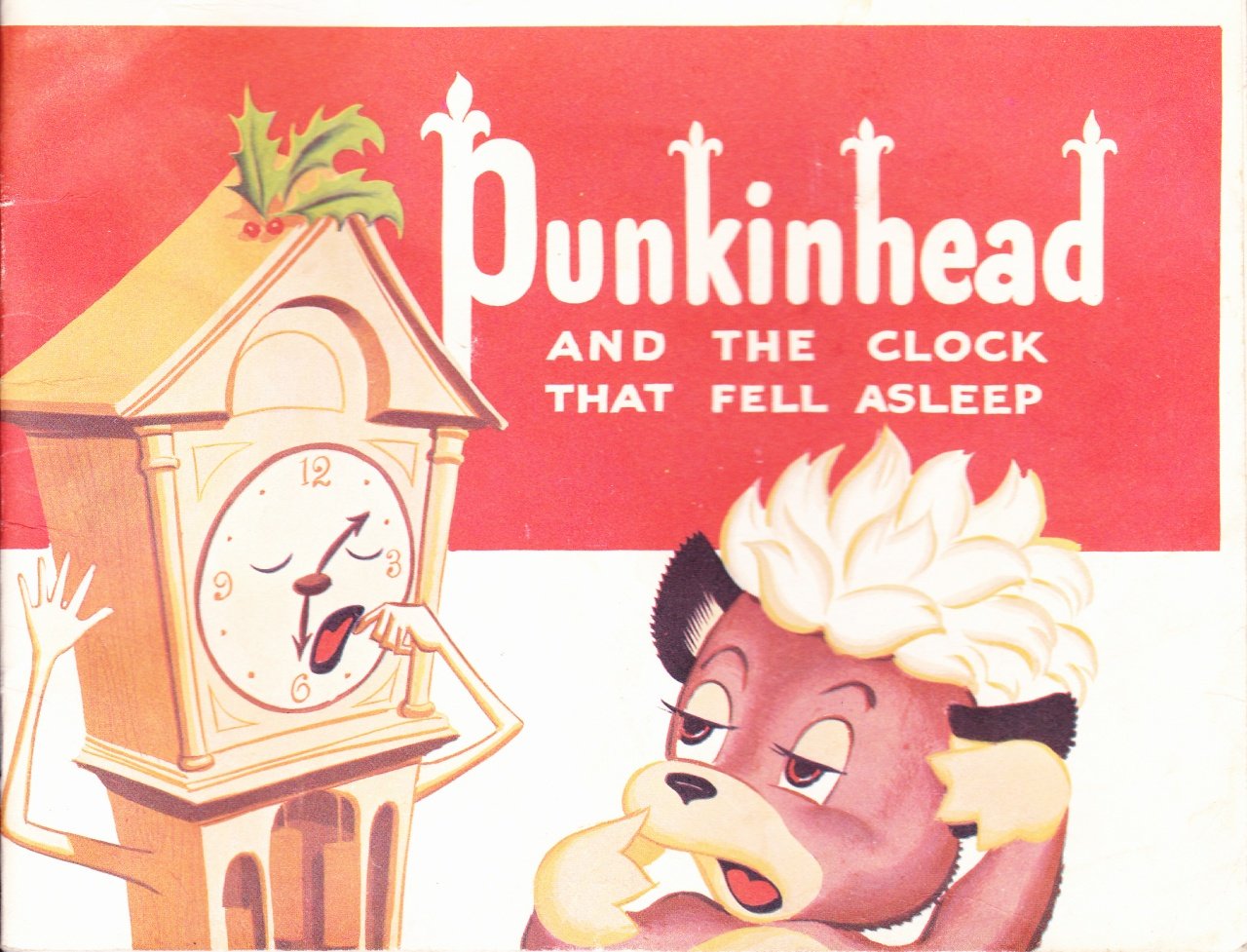 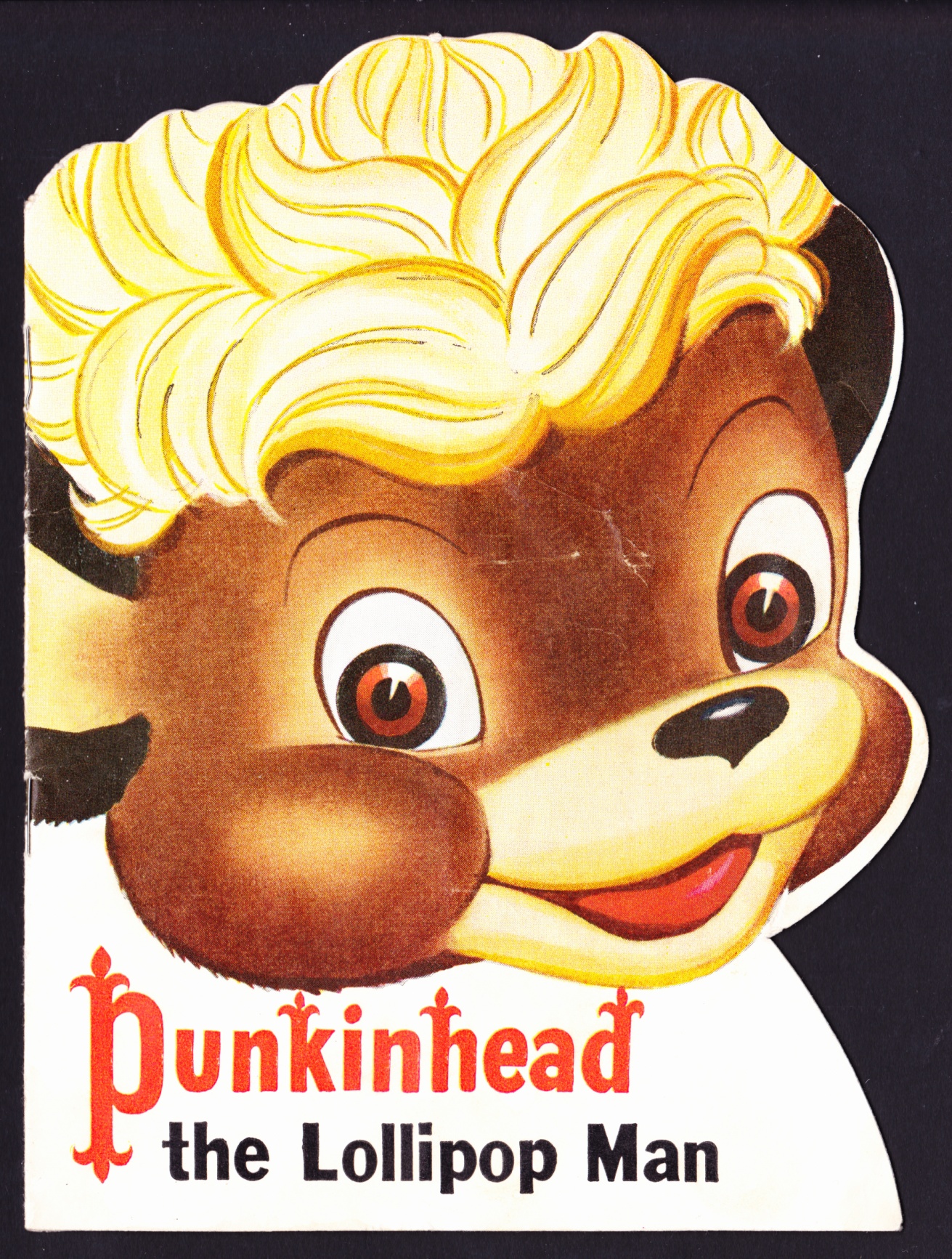 Placed on a black background to show the shape of the book. 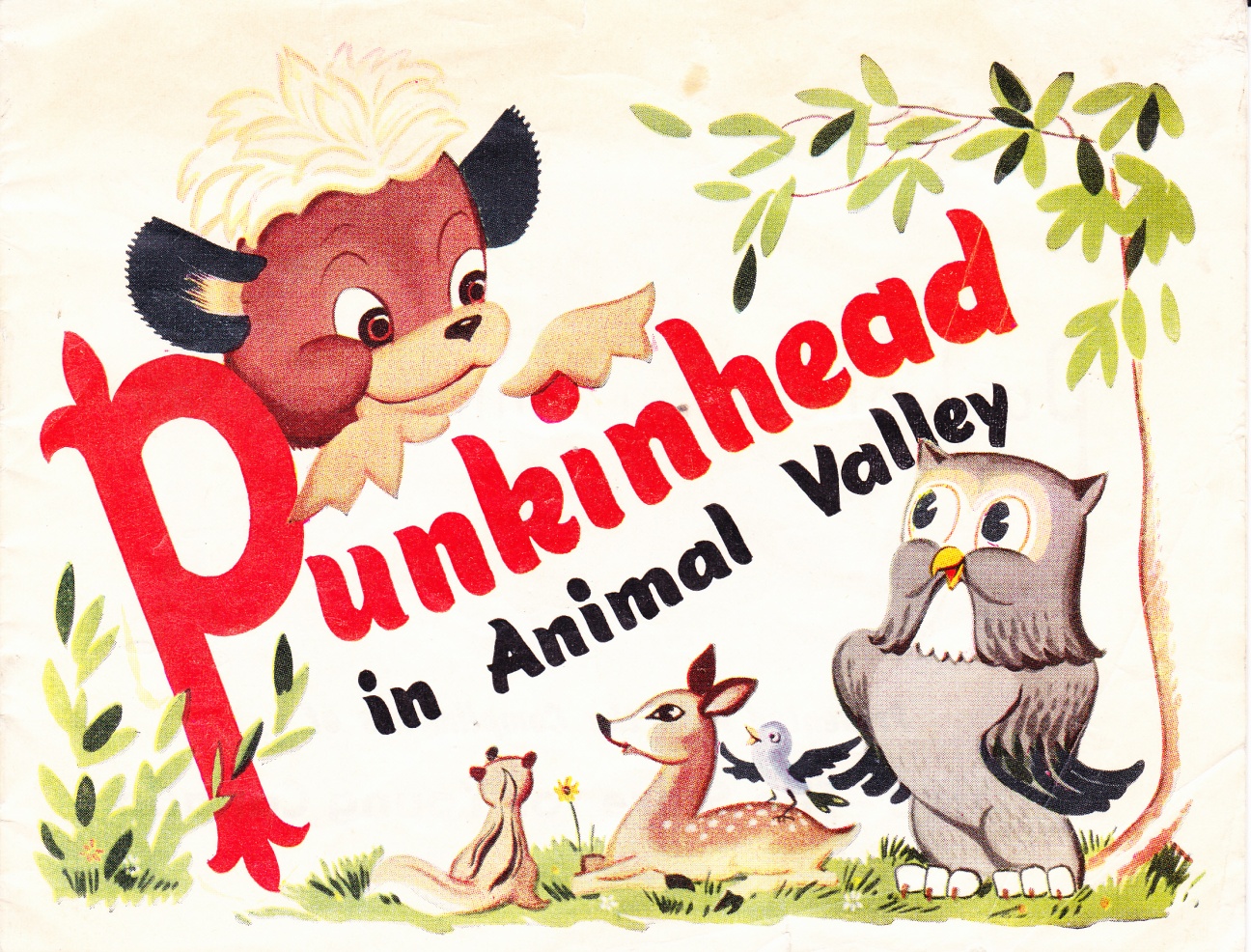