At age 13 (1939) he enrolled in the art program at Central Technical School in Toronto. In 1941 he apprenticed for Rabjohn Illustrators at $3.00 per week. While there he was greatly influenced by Bert Grassick, who also did editorial cartoons for Maclean’s and the Telegram [Toronto]. He asked Grassick to teach him to cartoon. Grassick handed him fifty sheets of paper and told him to come back in a week with drawings on both sides. When Lewis came back in a month, Grassick handed him fifty more sheets. Parker remained at Rabjohn till he joined the army in 1944.

He was sent to Debert then overseas where he joined the Stormont, Dundas and Glengarry Regiment. The war ended but he stayed on with the army of occupation. He became an all-purpose illustrator on the regimental paper until he was transferred to the Maple Leaf, the Canadian army newspaper in Holland and Germany, to substitute for Bing Coughlin, its chief cartoonist. He worked there till he was discharged from the army July 24, 1946. He returned to Canada. During his stay with the Maple Leaf, he created the cartoon strip “Wanda”

He returned to Toronto and his old job as apprentice illustrator in Rabjohn Illustrators. In 1947, with friend Gord Laws, he formed an art company. In May 1948 Norm Laws and Bill Sherman joined to form Sherman, Laws & Parker. It was also in 1947, during a three-month trip to New Mexico, U.S.A. that the art of the Taos culture awakened in him a profound curiosity about North American indigenous cultures in general and in his own Mi’kmaq ancestry in particular. However, it would be many years before this interest found an outlet.

In 1950/1951, along with Peter Newman and William Tiller, a metallurgist, Parker tried his hand at writing Science Fiction, but it was not to be.

He left the partnership he co-founded in 1956, and till 1970 he worked as a freelance artist. Len Norris then director at Maclean’s Magazine hired him as an illustrator. He worked primarily for that magazine but also did illustrations for other magazines such as Canadian Homes, Chatelaine and Canadian Magazine. He did occasional editorial cartoons for The Globe and Mail, Telegram, Toronto Star and Star Weekly. In addition, he branched out into book illustration for McClelland & Stewart, Macmillan of Canada, Little Brown, Gage etc.

As well as pursuing a career as a freelance illustrator, he developed a parallel career taking over public relations for the Crest Theatre, which was founded in 1953 and collapsed in 1966. As he told journalist Kate Gilderdale, “I got to know a lot of characters there, and that got me work with Herb Whittacker, theatre critic, at the Globe and then Nate Cohen, theatre critic, at the Star doing theatre stuff.”

Over this period and beyond he became involved in other visual arts ventures. From 1964 to 1967 he did illustrations for U.S.A. magazines using a New York agent. From 1964 to 1975 he entered a partnership Lazare and Parker with his friend and fellow artist Gerald Lazare. With Richard Doyle, he later helped form the Globe Weekly.

Over 1966/1967 he lived in Mexico with his wife and children and studied Mayan and Aztec cultures funded by a Canada Council grant. In 1968, the Canada Council gave him another grant to study indigenous plains cultures. For this he travelled to western Canada with fellow artist Eugene Aliman.

In 1968, Parker with Gerald Lazare began painting what became known as “The Huron Series”. The Huronia Council contracted for four paintings but the artists kept expanding the project until it reached thirty-six paintings and was not finished till 1971. The Huronia Council expanded their original contract to pay for ten of these illustrations, but beyond that number the artists did the painting on their own initiative. The Canadian Magazine 15 May 1971 presented the series as a major feature.

As this project ended in 1971 the National Film Board commissioned Parker and Lazare to do a series of five illustrations of an Inuit hunt for Beluga whales and of a buffalo jump. These were then used in a documentary.

The over 1972/1973 the Lazare/Parker partnership produced murals on three domes for the National Museums on site in Ottawa. The subject was the history of mankind. The first dome involved the emergence of early cultures beginning with Australopithecus. The second dome carried on this development through Homo Erectus ending with a modern city in the background and African west coast huts in the foreground. The third dome was painted in black and white and began with Homo Sapiens and ended with the United Nations Building. The challenge of maintaining a constant perspective was considerable. The artists were painting on 16 by 75 foot surfaces which were curved in both directions. Parker and Lazare worked with research specialists for a year to prepare the subject matter then executed the paintings over the course of eight months. Each painter did one dome alone. Then both of them completed the final dome. This was the last project on which Parker and Lazare partnered. Lazare left historical illustration to pursue other artist interests. Sadly this work was destroyed when the museum was torn down being replaced by the Museum of Civilization. All that remains is a sample section held in storage at the museum.

During 1970/1974 while the above projects were underway the Parker/Lazare partnership painted the “Indians of Canada Series” for the Wildlife Federation. Canada Post used one of these paintings for its stamp “Ceremonial Dress” issued 4 April 1975..

This was followed 1980/1982 with two 10 foot 6 inch wide by 5 foot 6 inch high murals for the Fortress Louisbourg National Historic Site. One painting gives a panoramic view of the entire harbor as seen from the Citadel clock tower, and the other to focus on the activities of the inner harbor and along the quay, is viewed from the masthead of Le Brillant.. His painting “The Founding of Louisbourg was used on a $100 coin issued by the Royal Canadian Mint. In 1983, he began a four year twelve painting history of Cape Breton commissioned by the University College of Cape Breton. He continued his historical painting 1988/1989 with a series for the Canadian Encyclopedia – Junior Edition, commissioned by Hurtig publishers. This was his last commission after which he retired.

He did do a final commission, film project for the Cinera Series in which he illustrated key figures in the American Revolutionary War. His daughter Leslie helped him with the research. The project was completed in 2003.

Lewis Parker was a member of Canadian Artists and Photographers in Communications, The Arts and Letters Club of Toronto and the Canadian Society of Book Illustrators.

The Canadian Magazine, 15 May 1971 “The Day of the Hurons: Paintings by Lewis Parker”.

Parker’s work has been exhibited at:

The above career arch is based principally on a list of activities provided by Lewis Parker. 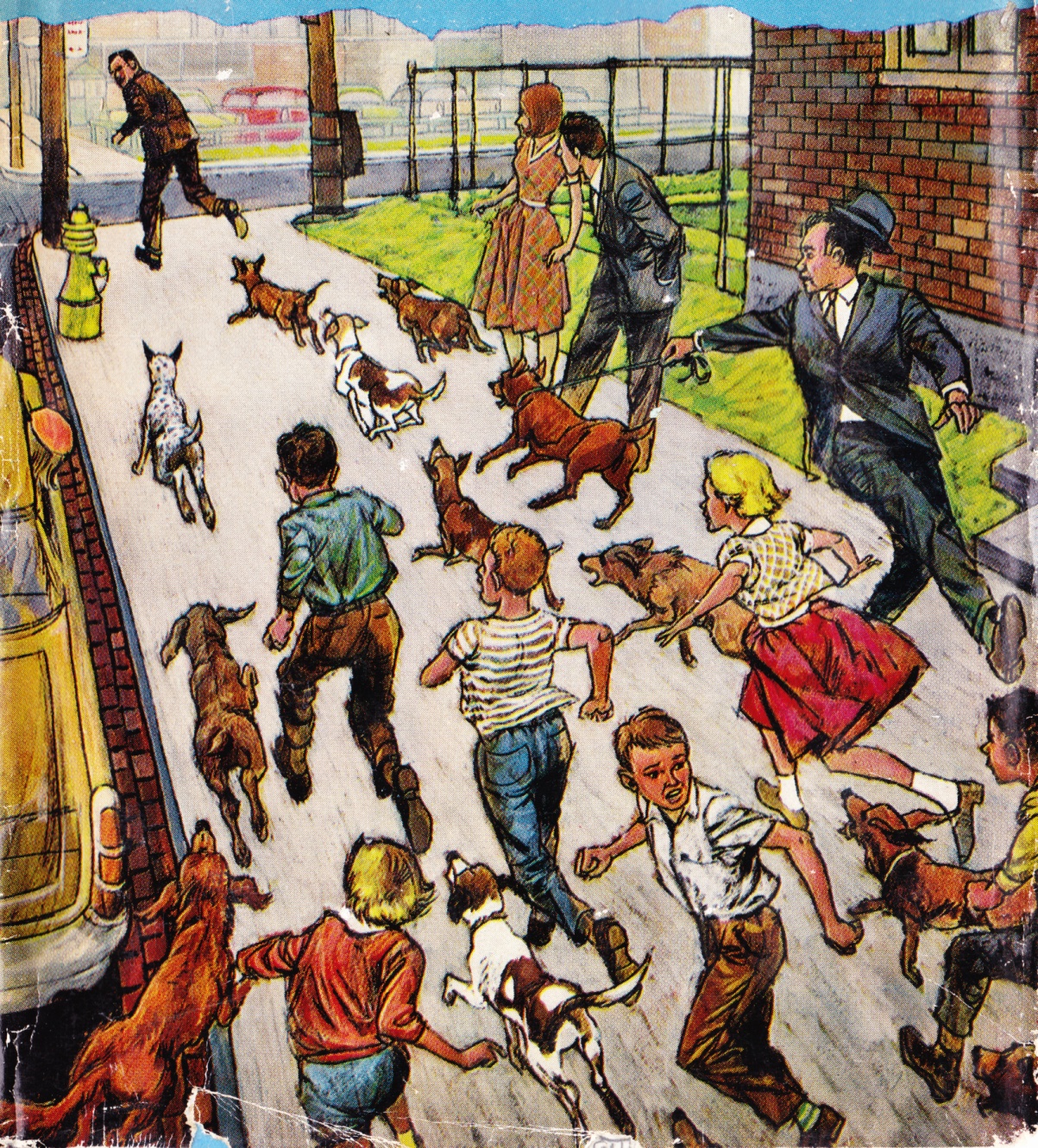 The illustration from the dust jacket of The Mystery Of The Disappearing Dogs. 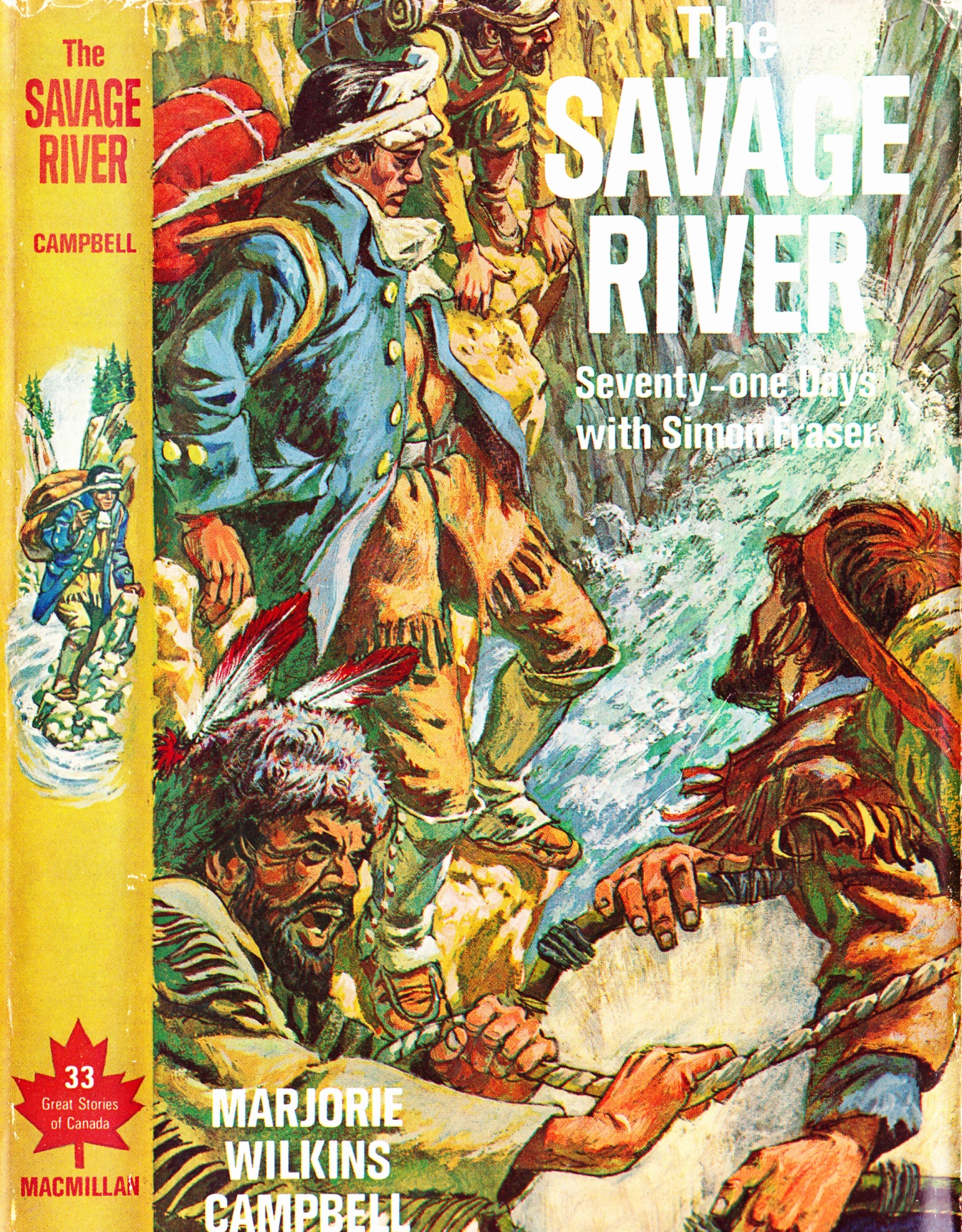