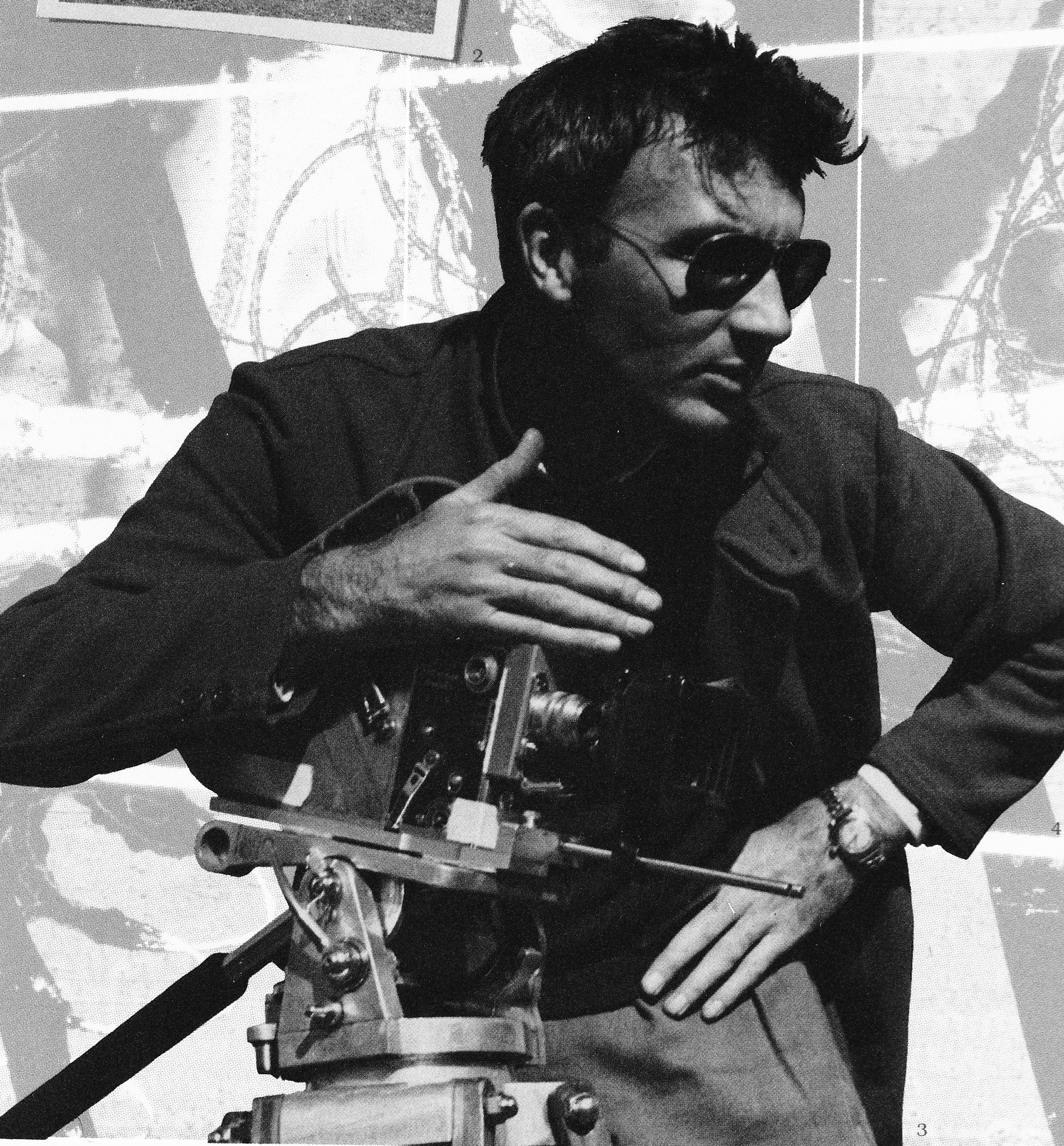 “Animation is not the art of drawings that move, but the art of movements that are drawn.”

At eighteen years he began studying art and set design at Glasgow School of Art. He graduated with a degree in Interior Design. In 1934, he joined the Glasgow Film Society, and came to think of film as an art form. He developed the exacting technique of drawing directly on film thus eliminating the expense of needing a camera.

In 1935, he entered Camera Makes Whoopee in the Glasgow Amateur Film Festival. The one man jury, John Grierson the famous British documentary film-maker, judged the film bad but seeing McLaren’s potential gave him a prize and hired him to work for London’s General Post Office film department. In 1936, he was given a leave of absence to travel to the Spanish Civil War were he acted as cameraman for director Ivor Montagu’s film of the siege of Madrid. Back at the General Post Office, under Brazilian avant-garde director Alberto Cavalcanti, McLaren made his first animated film Love On The Wing.

In October 1939, he arrived in New York as a landed immigrant. After several months he got a job producing industrial and public relations films. In his spare time he made short abstract films. He drew both the visuals and the sounds on clear 35 mm film stock. These were purchased by the then named Guggenheim Museum of Non-objective Painting.

In 1941, Grierson, who founded the National Film Board, and was appointed the first Government Film Commissioner wanted McLaren to come to Canada to work for him. McLaren told Grierson that he was in the midst of directing a film and couldn’t leave and besides he didn’t want to make hard-sell war propaganda films. Grierson assured him that he would be free to make cinema on his own terms, and through diplomatic channels pressured McLaren’s employers to release him from his commitments, shortly after McLaren was in Canada working for Grierson.

After a short stint making a succession of films using his drawing-on-film technique, McLaren was assigned to establish an animation unit in late 1942. Over the next fourteen months he hired and trained future N. F. B. animators.

Returning to animation in 1944, he produced C’est l’aviron and Là-haut sur ces montagnes for the Chantes Populaires series. In 1949, McLaren with Evelyn Lambert, created Begone Dull Care innovating the technique of painting lengthwise of film stock. Pablo Picasso saw the film and cried “Here at least is something new in the art of drawing.”

In 1949, he went to China to take part in an UNESCO project on fundamental education. He taught animation and filmstrip techniques to Chinese artists so that they could use them to teach rural populations health and sanitation. As he was teaching in the area, the Communist Army moved in and took control.

On his return to Canada, he created two 3D films, Now Is The Time and Around Is Around for the 1952 Festival of Britain. These films were an extension of his hobby of making stereoscopic drawings and paintings. The following year in 1952, he produced Neighbours a film featuring stop motion animation of live actors. It won an Oscar. On hearing the news he said:’ Thanks but who is Oscar?’

By this time he was in India on another UNESCO fundamental education project. While there McLaren’s health suffered and on his return to Canada it deteriorated further until he was hospitalized with severe rheumatic fever which permanently damaged his heat.

However, he was able to finish Blinkity Blank, in 1955. For this film, he won the Palme d’or at Cannes.

In 1956, he and the N.F.B. staff moved to their new headquarters in Montréal.

State honours, awards at various film festivals, invitations to visit film and other institutes, interviews, and his continuing poor health, cut into McLaren’s film productivity, even though he sought ways to reduce the celebrity commitments. He did, however, continue to produce a steady stream of films.

In the late 1960’s he returned his experiments in human movement that he had begun in Neighbours and A Chairy Tale back in the 1950’s. According to Guy Glover, “His elaboration of ‘live action’ through control of camera speeds and through intricate optical printing processes was pushed far in Pas de deux (1967) and even farther in Narcissus ….”

In 1975, he received the Anni Award of the International Animated Film Society

He died of a heart attack, 27 January 1987 in Montréal. By that time he had produced 59 films and won about 200 international awards. Three close collaborators with many of these films were composer Maurice Blackburn and animators Grant Munroe and especially Evelyn Lambart all of whom developed distinct careers of their own.

“For all but two of his 45 years as a professional filmmaker, Norman McLaren ha[d] remained as a civil servant. John Grierson’s 1941 offer on behalf of the Government of Canada – ‘Come and you will see that you can make cinema as you understand it’ – turned out to be as much a prophesy as a well-kept promise.” (Glover)

In 2018, Frame By Frame a ballet based on the life and work of Norman McLaren was created by Robert Lepage playwright, director, actor and filmmaker and Guillaume Côté, , choreographer, musician, composer and principal dancer and Choreographic Associate of the National Ballet of Canada. It was a collaboration between the National Ballet of Canada, Ex-Machiuna Lepage’s multidisciplinary production company and the National Film Board. It ran June 1-10, 2018.

Alouette, 1944, 3 min., co-animated with René Jodoin. Single frame animation of paper cutouts was used. This was number 1 of a sing-along series “Let’s All Sing Together”.

La Poulette grise, 1947, 5 min., 32 sec., coloured pastel drawings illustrating phrases of a French lullaby Metamorphose in a continuous chain of mixes made in the camera. Melody sung by Anna Malenfant of Montréal.

Now Is The Time, 1950-1951, 3 min., one of two 3-D film commissioned by the British Film Institute for the Festival of Britain. Stereoscopy was achieved by photographing and drawing two visuals, one for each eye. The hand drawn sound was composed and drawn on two separate bands for stereoscopic playing.

Neighbours, 1952, 8 min., 10 sec., techniques used to animate drawings or puppets were used to animate live actors. It is sometimes called pixilation. Sound also animated. Story of two neighbours who kill each other and their families over desire to possess a flower. Eight awards including Hollywood, Oscar, Rome.

Two Bagatelles, 1952, 2 min., 22 sec., two studies using pixilation. “On the Lawn” actor Munroe does a pixilated waltz to McLaren’s synthetic music. “In the Backyard” is a fast march to a calliope.

Blinkity Blank, 1955, 5 min., 15 sec., an experiment that made use of intermittent animation and spasmodic imagery to play with persistent of vision and after vision in the retina of the eye. The visuals were engraved and coloured on black 35mm film. The music was by Maurice Blackburn. Twelve awards including, Berlin, British Film Academy, Cannes, Edinburgh.

Opening Speech, 1960, 6 min., 33 sec., made for opening of the 1961 Montreal International Film Festival, it animates both objects and actor (McLaren). Award, London.

Lines Horizontal, 1961, 5 min., 58 sec., each frame of Lines Vertical was turned on its side by special optical process and colour was added by filters in an optical printer. Music by Pete Seeger.

Synchromy, 1971, 7 min., 27 sec., an animated sound composition. “What you see is what you hear.” Eight awards including Barcelona, Melbourne, San Francisco.

Animated Motion Parts 1 to 5, 1976 to 1978, each ranging from 7 to 10 min., a series of five study films In which McLaren comments on, demonstrates, and classifies aspects of motion which the animator employs in his work. Award, Athens. 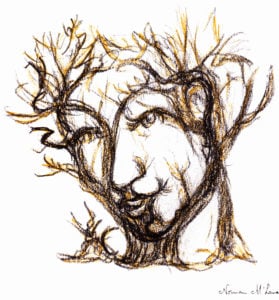 From dust jacket of The drawings/les dessins de Norman McLaren. 1975.