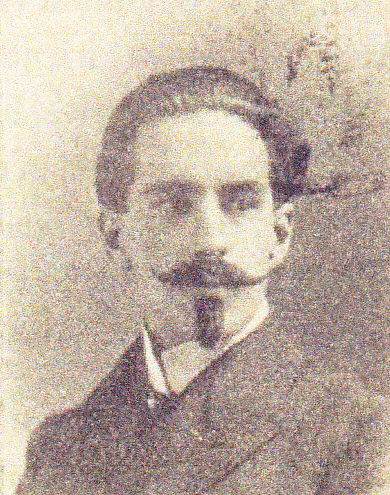 Copied from a Dictionary of Canadian Biography photo taken from Bibliothèque at Archives Nationales du Québec.

He studied drawing and painting at college des Frères des écoles chrétiennes in Sainte Cunégonde. From 1892, to about 1895 he studied at the Conseil des arts et manufacture de la province de Québec and at the school of l’Association des arts de Montréal.

His early work was influenced by the art nouveau movement. However, it appears the artists he most admired were not part of the art nouveau movement but rather were the fashionable graphic artists of his time: Americans Charles Dana Gibson, Charles Stanley Reinhart; Frenchmen, Gustave-Henri Marchetti, Jean-André Castaigne, Alfons Mucha, and fellow Montréaler Henri Julien. . The art nouveau phase of his illustrative work reached a climax in 1901 to 1902 in a series of title pages for Le Monde illustré. After this time, he appears to have attempted, in his illustration, a blend of art nouveau and the technical virtuosity and elegant subjects of the illustrators he admired. In this period he also showed an interest in traditional rural Québec.

He was a prolific illustrator. By 1900, it is estimated he had produced 1000 illustration and compositions for Montréal publications.

In 1909 he succeeded at Almanache du people, Henri Julien, who had died, he turned away from the art nouveau style and toward Julien’s style of traditional realism. For this magazine, he drew over 150 illustration by 1929 and had become the leading illustrator of traditional Québec life. The research for the illustrations was done by his brother Édouard-Zotique who was also a historian and folklorist. In 1923, twelve works mostly collected from Almanache du people, appeared in a series called Canadiens d’autrefois. Commentary was provided by such famous writers as Albert Ferland, poet; Lionel Groulx, historian, and Marius Barbeau the founder of Canadian anthropology..

Twenty-four traditional scenes by Massicotte were reproduced by Librairie Beauchemin Ltée of Montréal in “Canada Français” a set of 25 post cards published circa 1950.