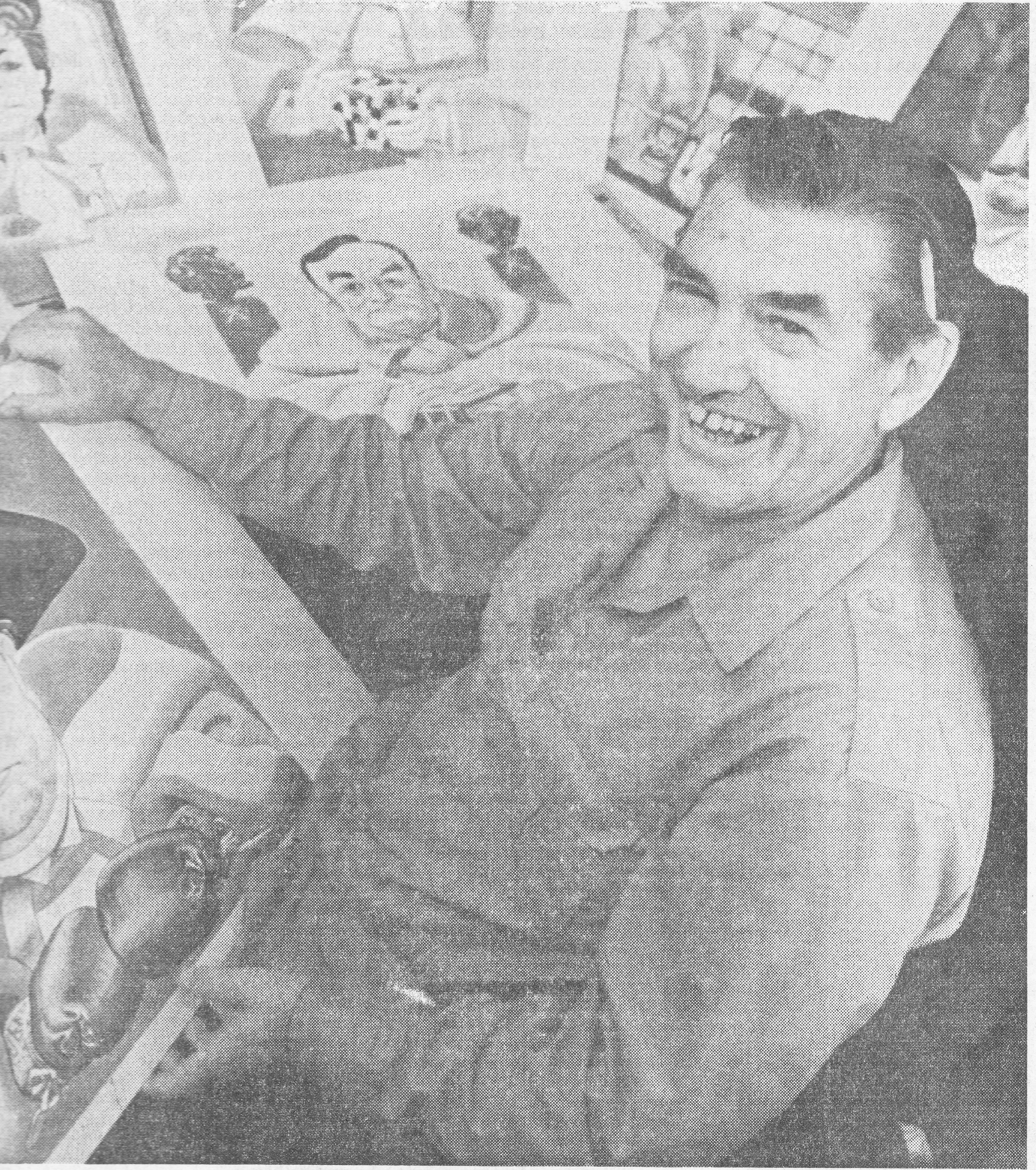 Comments by his peers. 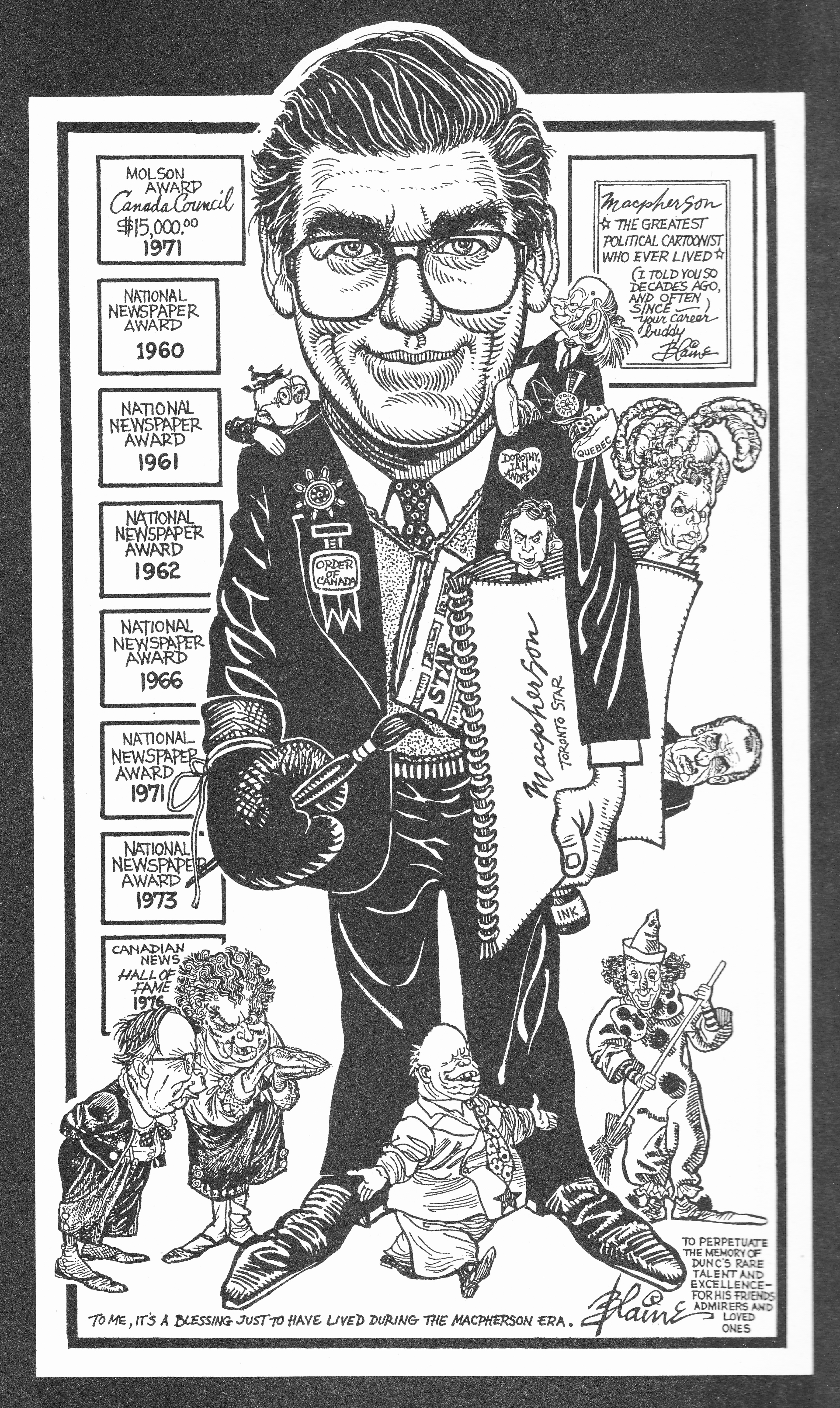 A Tribute by Blaine, Portfoolio 9: 6.

Macpherson from a very young age was interested in cartooning but was discouraged by his parents who wanted him to enter the family textile business. In 1941 and seventeen years he joined the Royal Canadian Air Force and was shipped overseas to England where he packed bombs. In his spare time he took art courses and studied British political cartooning. Before the war ended he won a prize for an RCAF poster showing a stick of bombs coming out of the bomb bay.

After World War Two he used his veteran’s pension to study graphic arts at the Boston Museum of Fine Art. Dick Hersey art director at the Standard (later the Weekend Magazine) had seen some of Macpherson’s drawings in a collection in Ottawa and persuaded the publisher J.W. McConnell to subsidize part of Macpherson’s art studies.

In 1947 his father died, and Macpherson attempted to run the business, but he soon abandoned this and instead entered the Ontario College of Art from which he graduated in 1951. Even before he graduated, he was given a freelance contract by the Standard to replace Jimmy Frise who died of a heart attack 13 March 1948, as illustrator for journalist Greg Clark’s stories. Pierre Berton Managing Editor of Maclean’s liked the work and hired Macpherson to illustrate journalist Robert Thomas Allen’s stories. Macpherson developed a cartoon character to represent Allan which Allen never liked but which Macpherson later used to great effect in his editorial cartoons as the average Canadian.

When in 1958, Pierre Berton left Maclean’s to join the Star [Toronto], he talked Macpherson into coming with him. At first Macpherson was hesitant. He had studied the great British editorial cartoonists James Gillray and David Low and had become, to put it in his words, “quite convinced I didn’t think that way. They had something to say Anything I had to say was just a personal beef. I had no great social conscience then and I don’t now.” [1973] (4). Macpherson was non-partisian. “I’m simply against wrongness in public life.” (243). Perhaps that is why he became our greatest cartoonist.

He accepted the job as editorial cartoonist at the Star at a starting salary of $11,000 per year which made him probably the highest paid cartoonist working in Canada at the time – an amazing introduction for someone who was till then first and foremost an illustrator. It was a wage well spent. Macpherson’s popularity soared although at the start readers didn’t quite know how to take him. According to Beland Honderich the Star’s publisher, “The first reaction to Macpherson’s cartoons was that they were cruel. People had never seen this type of cartooning in Canada. They weren’t prepared for it.” (148)

Although initially unsure about his qualifications as an editorial cartoonist, Macpherson’s independent personality was never in doubt. After about a year in the job, he asked the Star to reduce his work load from five cartoons a week to three so that he could travel to Cuba to draw sketches for the newspaper. He was refused and so he quit and returned to Maclean’s. His popularity helped Berton to override Honderich’s decision and entice Macpherson back from Maclean’s.

He retired from the Star in April 25, 1993 and died May 3, 1993 at the age of 68 years. He had been diagnosed three months earlier with pancreatic cancer.

On 8 October 2021, Canada Post Corp. honoured him with a first day cover and a commemorative stamp.

A Collection of the Cartoons of Duncan Macpherson. Toronto Star Ltd., no date.[1961]

How Pierre and I Saved the Civilized World. Writ., Gary Lautens. Methuen Publications, 1984. A collection of Lautens columns and a collection of Macpherson editorial cartoons. 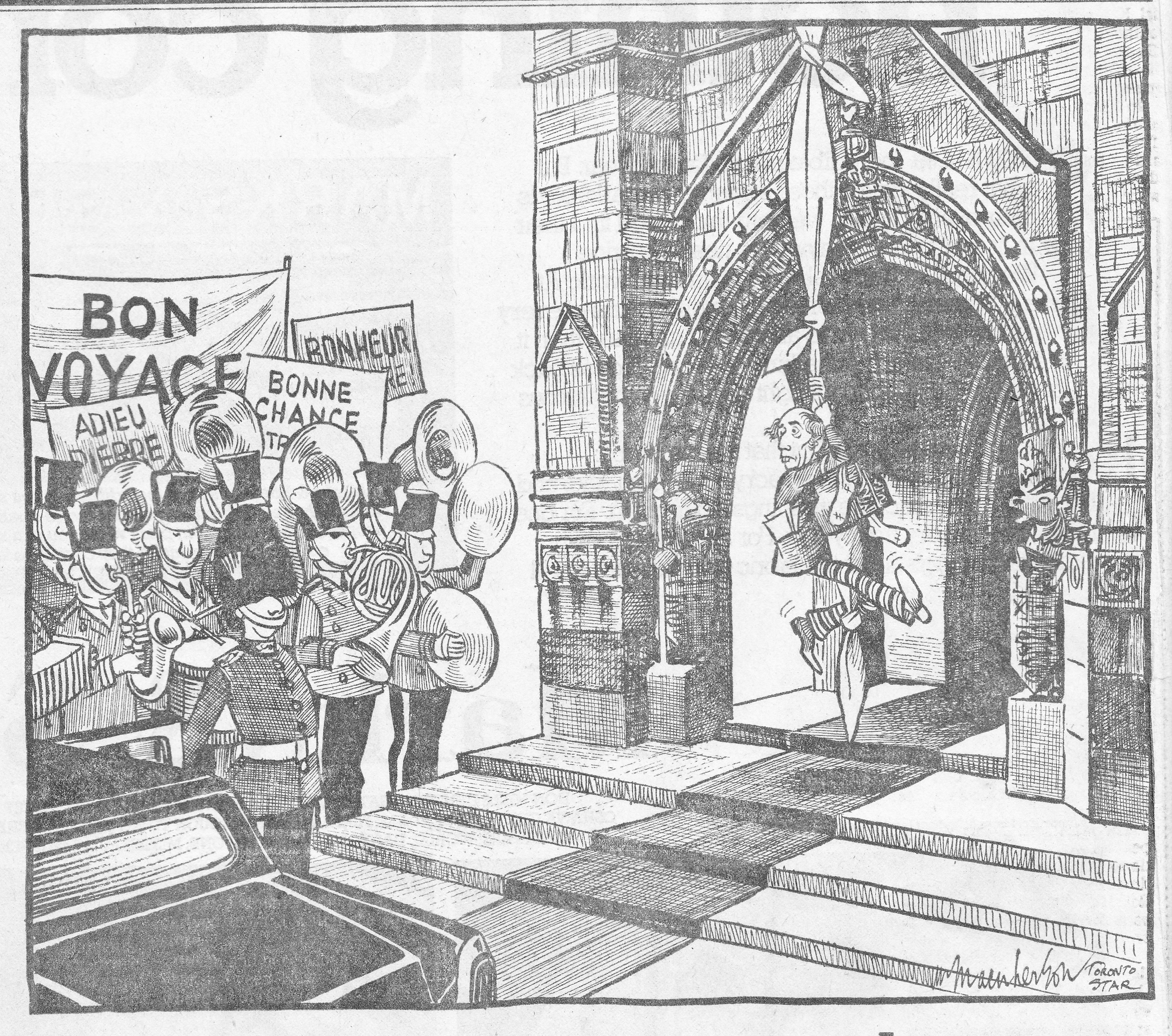 Taken from program for Walter Gordon’s Seventieth Birthday Party, 1976. This cartoon which originally appeared in the Toronto Star, portrays the passage of the “Bank Act” by economic nationalist Walter Gordon of the Lester B. Pearson government. The act was passed to protect Canada’s financial independence from the U.S.A. 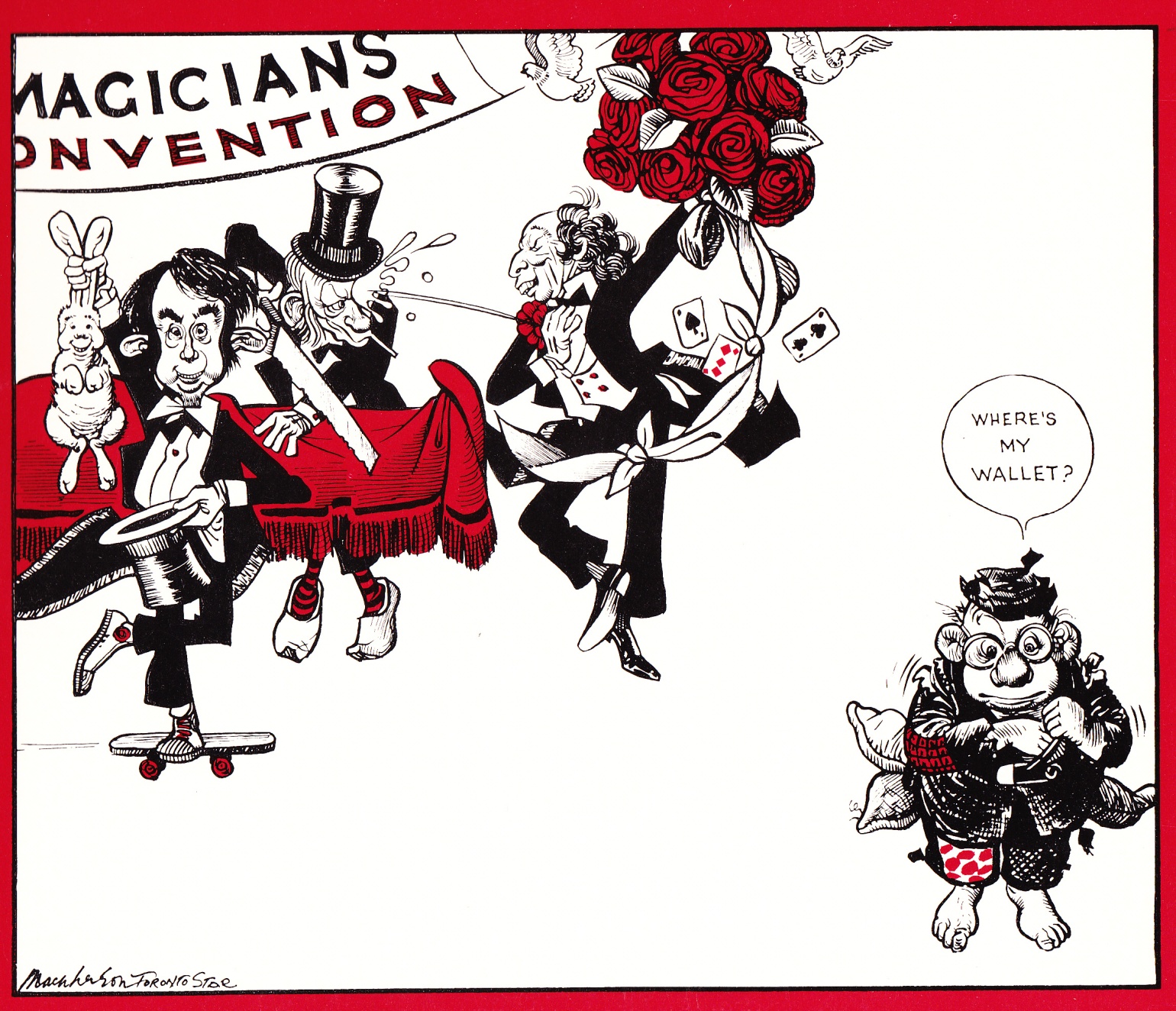 MacPherson Editorial Cartoons 1978: Front cover. This cartoon is an example of his sympathy for the average Canadian. This character appears in many of Macpherson’s editorial cartoons.