Born 1956 in Toronto but raised in Kitchener Ontario. As she grew up in Kitchener she was greatly influenced by her uncle Robert Kunz who was a newspaper and textbook illustrator. It seems that her philosophy of illustration came from him, as she said about her uncle, “His art was not to hang on a wall, but for education’s sake.” About her own work she has stated, “ I prefer to illustrate articles about social and political issues.” Other influences included the “Old Masters”, particularly Northern Renaissance painter Roger van der Weyden.

Even as she was graduating her work was appearing in publications like The Canadian and The City. She took jobs in advertising and sent her illustrations to various magazines. She came to the attention of Fred Woodward, a prominent U.S. art director, and did work for him when he was at the Texas Monthly, then Regardie’s and when he moved to the The Rolling Stone in 1987. While her work has appeared in Maclean’s magazine, Saturday Night (now defunct) and Walrus, Anita estimated that 90 to 95% of it  went to the U.S. market. She was a regular illustrator for Time, Newsweek, Esquire and The New York Times Book Review. She freelanced for The New Yorker, The Atlantic, The New Scientist, Sports Illustrated, and The London Sunday Time. In addition to magazine work she did book covers and posters including a 1986 Canadian Opera Company poster in which she depicted a woman with six arms, each presenting one of C.O.C.’s productions, and a 1995 Toronto International Film Festival poster showing Eve with an apple shaped reel of film.

According to C. Hume     “… she has evolved a unique expressive style that’s realistic without being photographic.” Anita has said “It’s a question of making things accessible. Sometimes it’s a very intellectual process, sometimes very intuitive.”

She was part of a group of young Toronto graphic artists in the late 1980’s, which included Jamie Bennett, Blair Drawson, Jeff Jackson, Maurice Vellekoop and Rene Zamic whose work spread throughout both the North American and European markets. Anita once commented on the group’s impact, “I was in New York at a symposium a couple of weeks ago and everyone was talking about what a hotbed of talent Toronto has become. Art directors now seem to be on the look out for people from Toronto.”

From 4, September 2003 to 3, January 2004, Anita was honoured by the U.S. Library of Congress with a solo show Canadian Counterpoint: Illustrations by Anita Kunz at the library’s Swann Gallery. She was the first Canadian to be so honoured.

In 2009, she was made and Officer of the Order of Canada, our highest civilian award. In 2012, she was awarded a Queen Elizabeth II Jubilee Medal. She was inducted into the Society of Illustrators “Hall of Fame” in 2017. On 5 April 2018, Canada Post honoured her with a first day cover and commemorative stamp.

See below the appreciation of Anita Kunz written by Prof. Jaleen Grove. 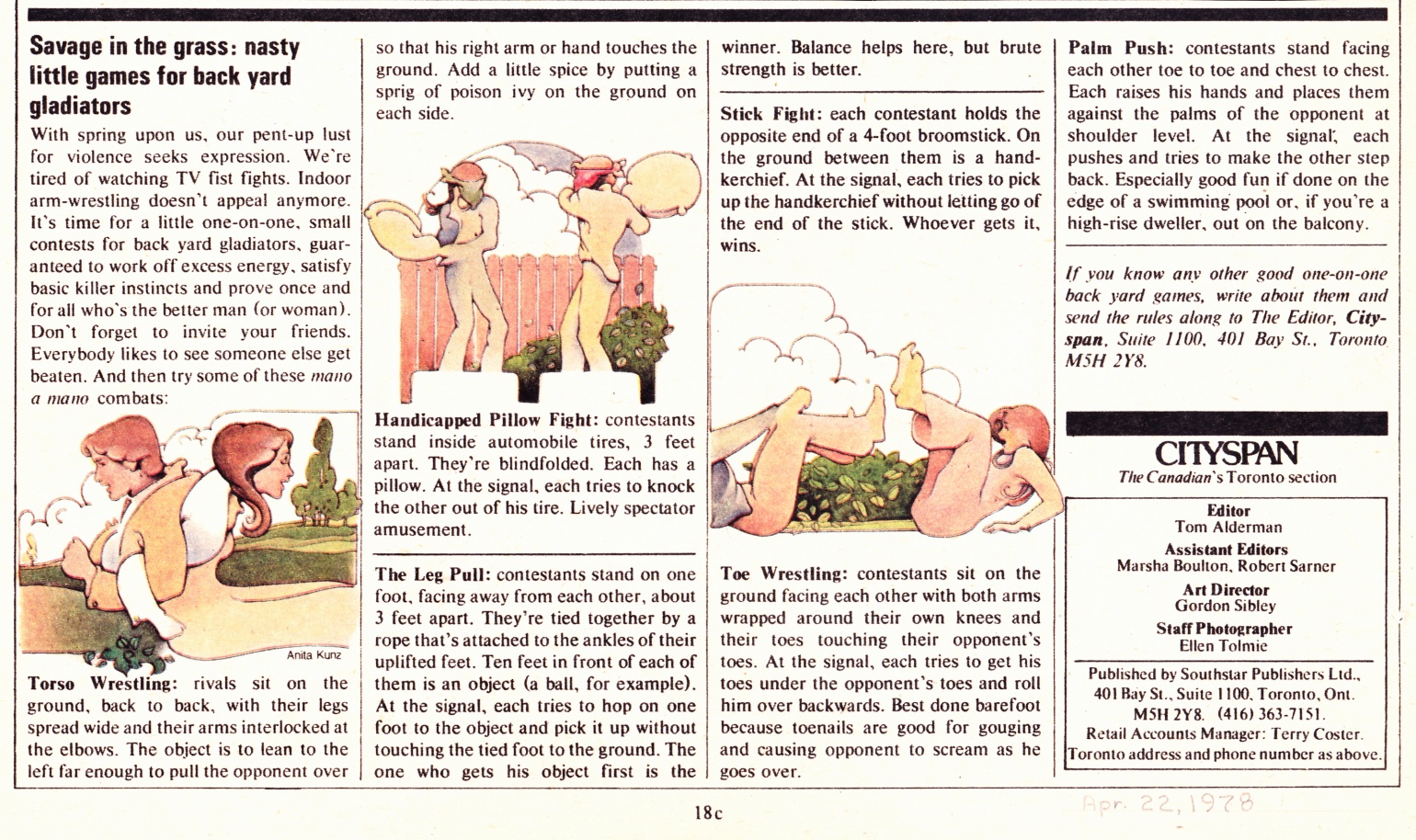 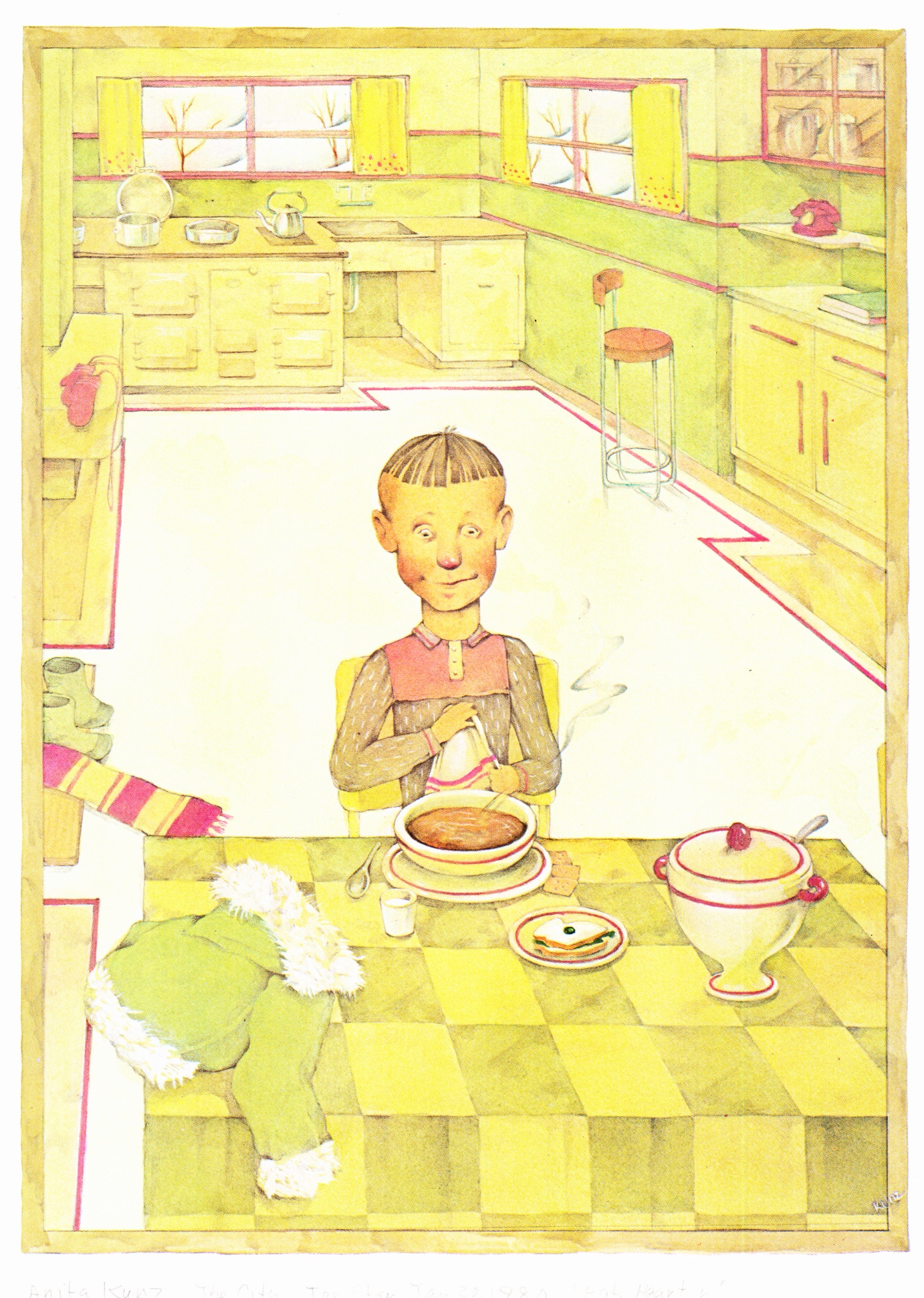 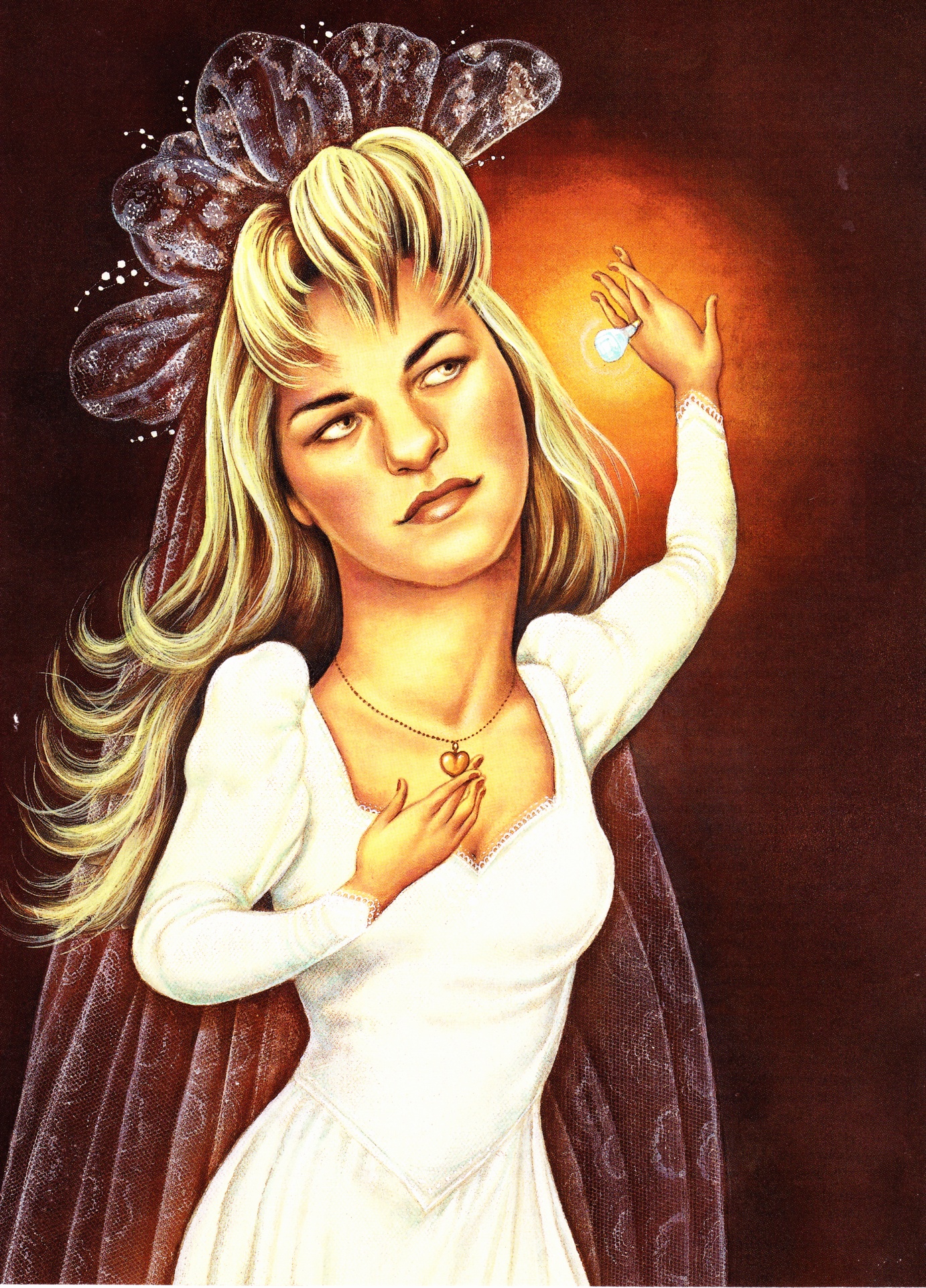 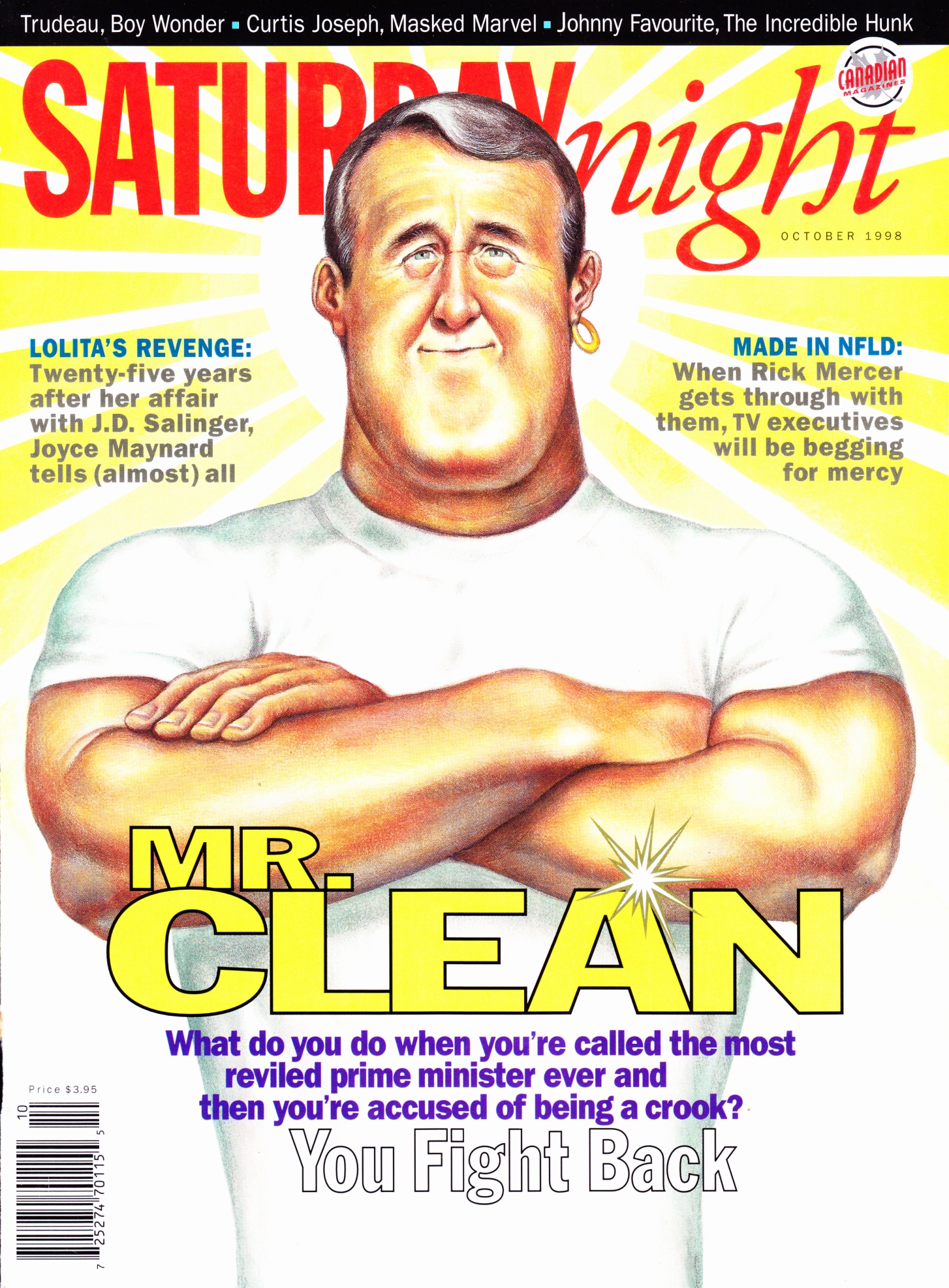 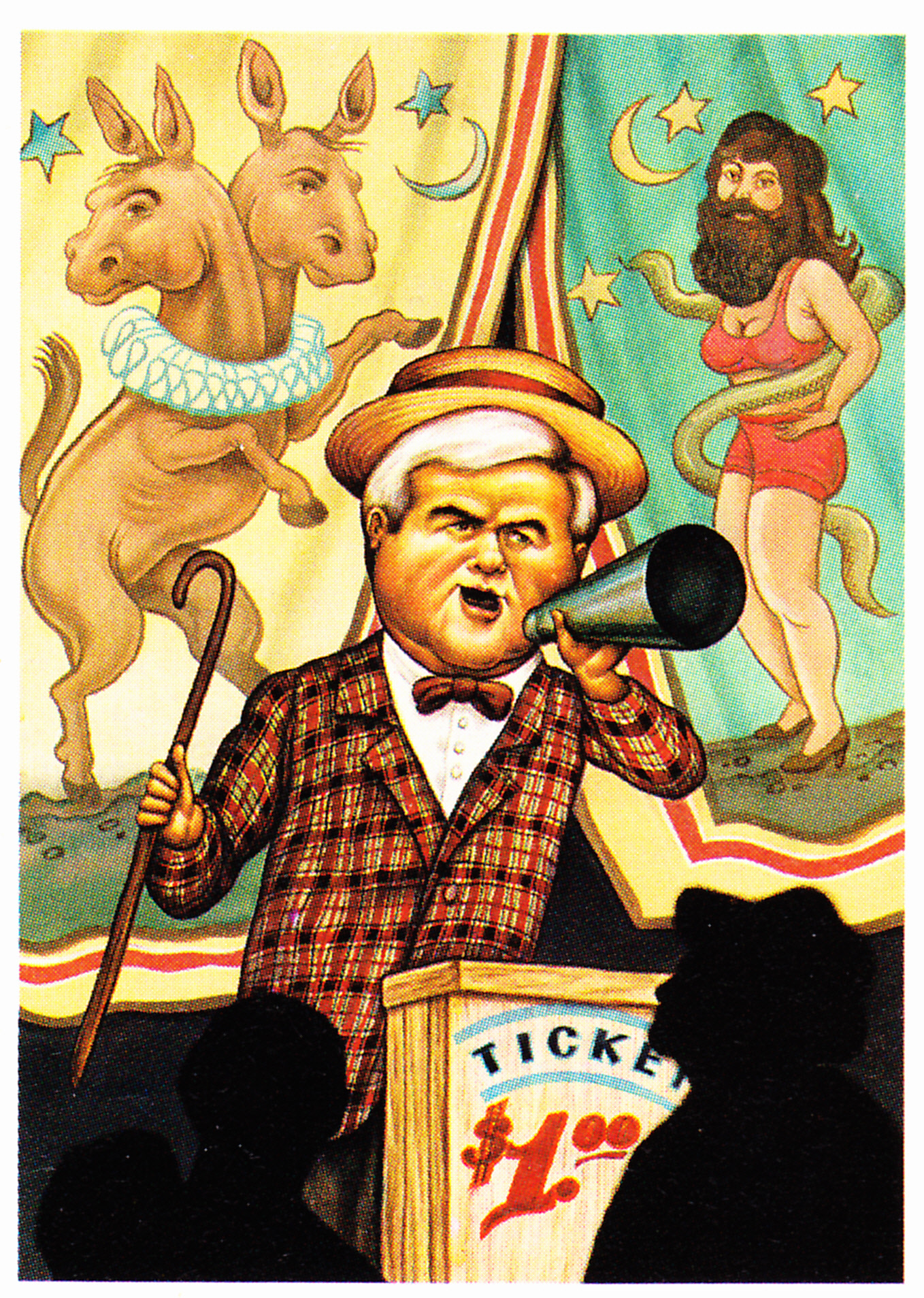 Maclean’s, 13 October, 2003: An illustration taken from the Canadian Counterpoint show.  70. 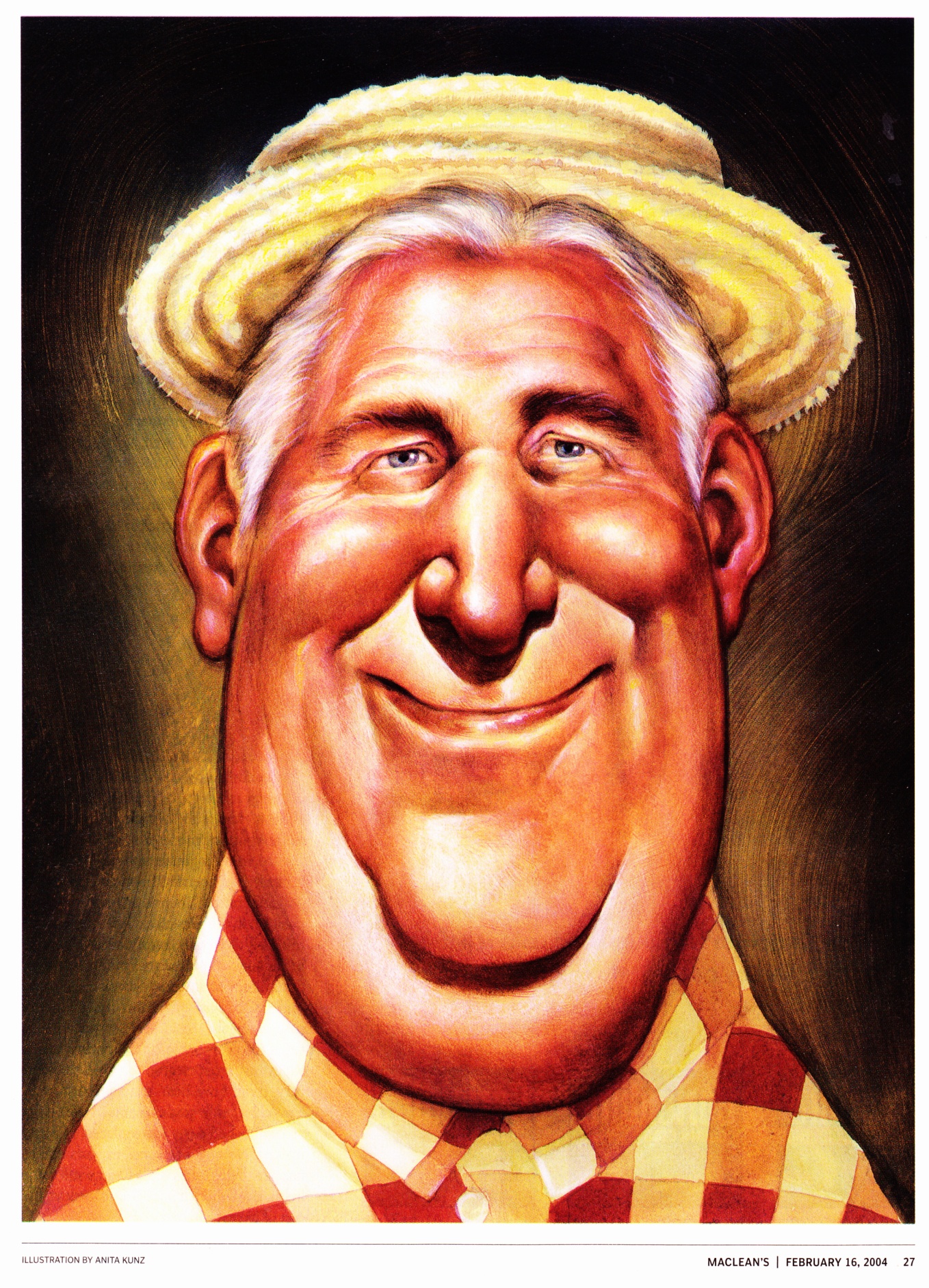 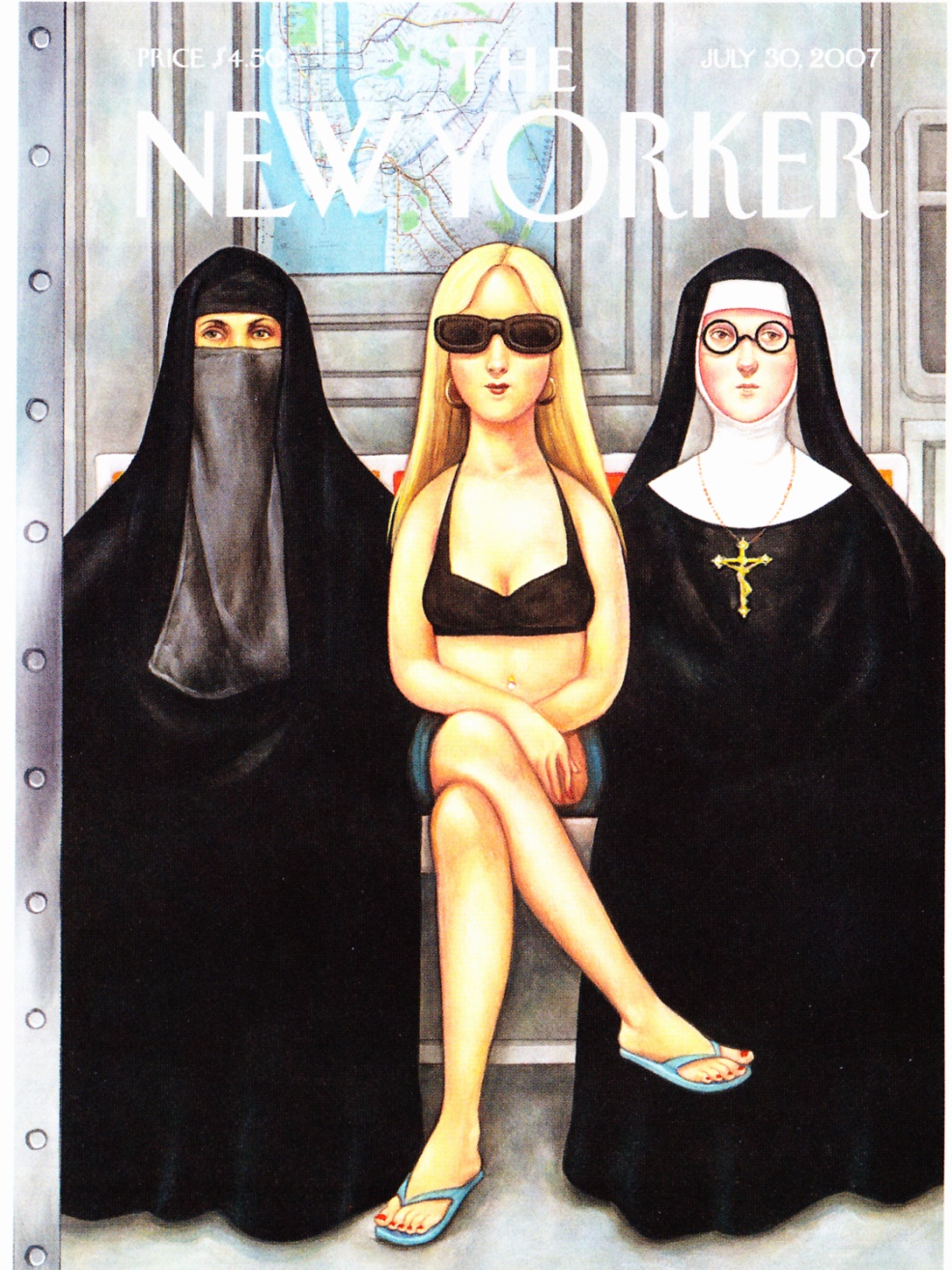 Prof. Jaleen Grove gives an appreciation on the occasion of Anita Kunz’s induction into the The Society of Illustrators “Hall of Fame” 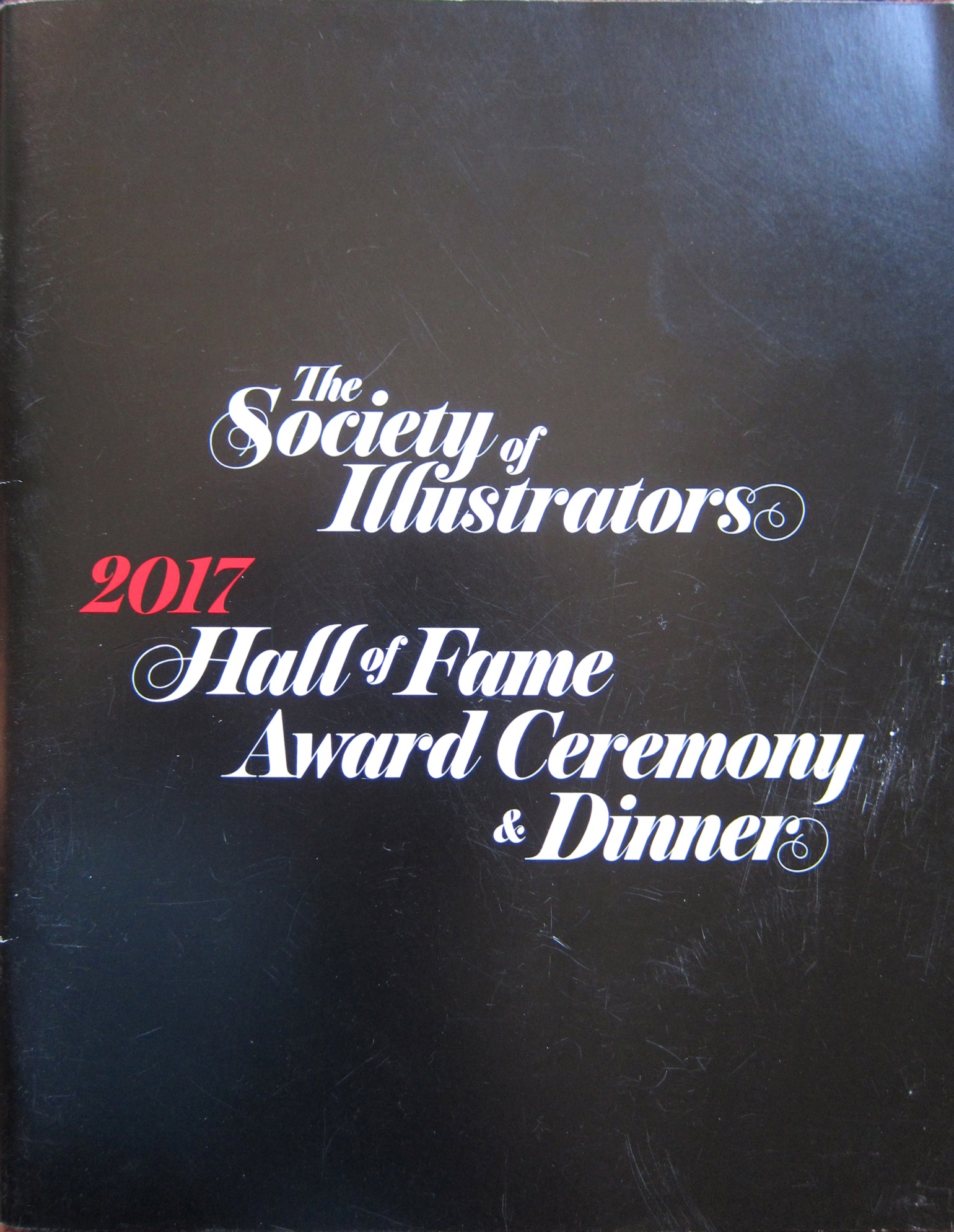 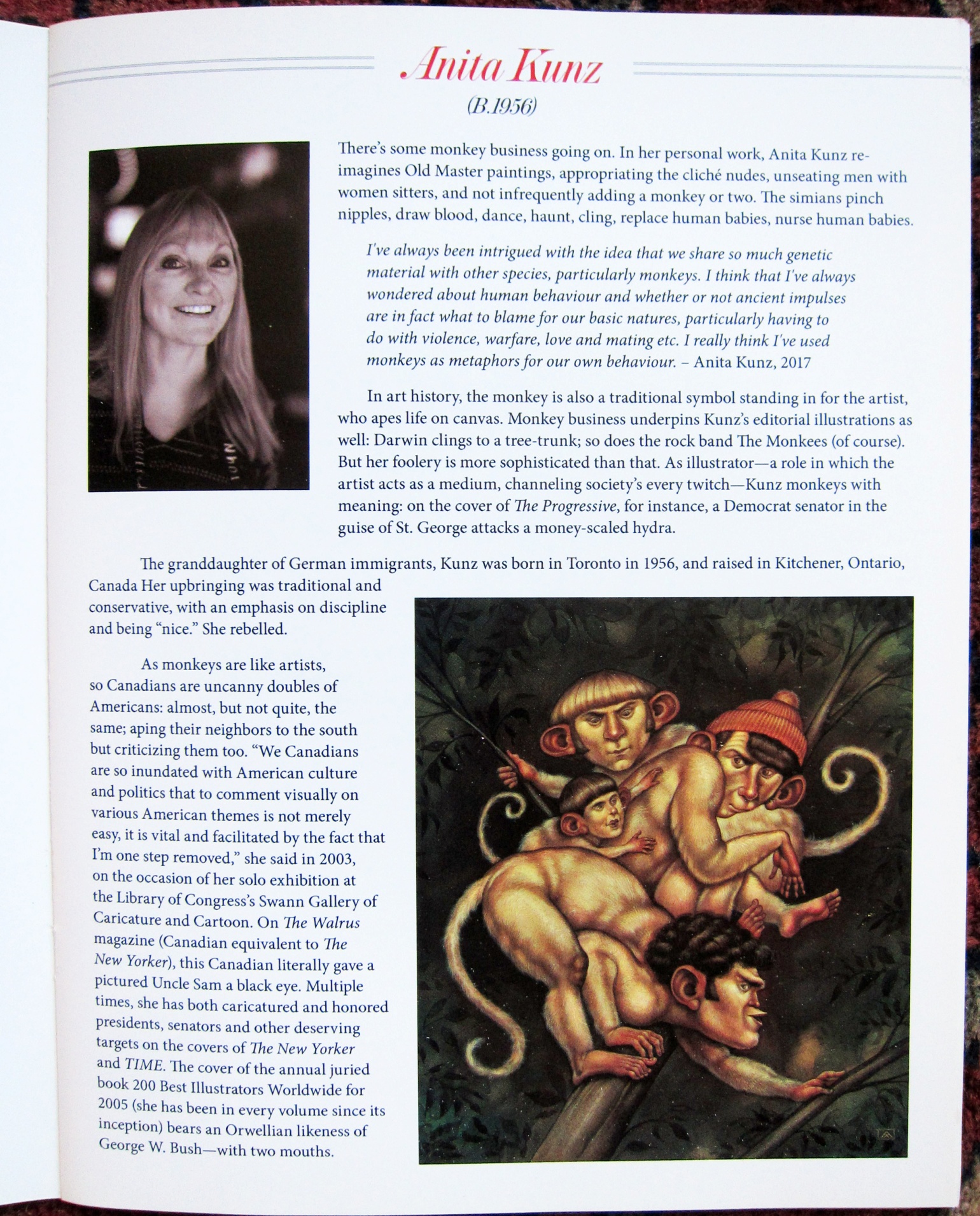 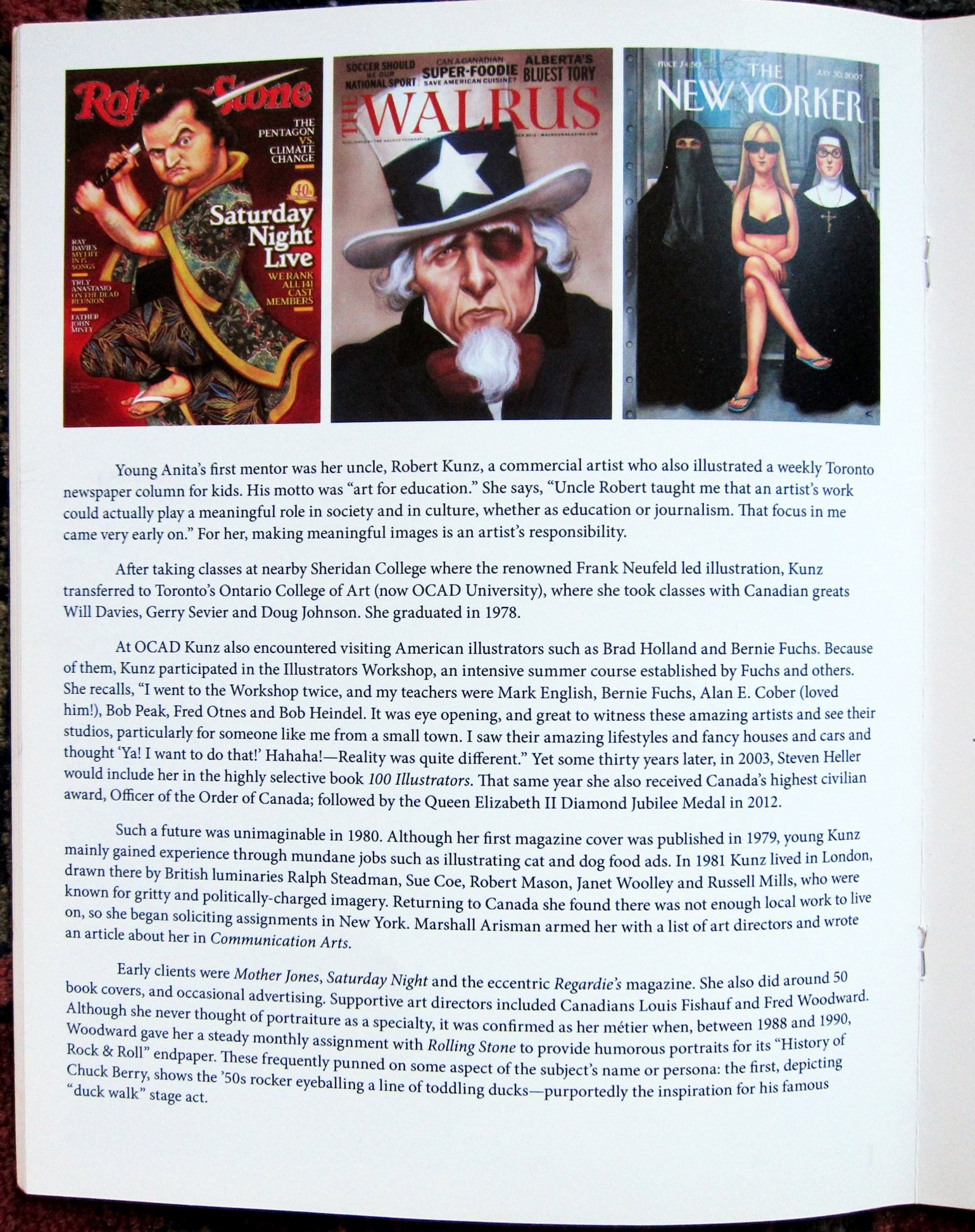 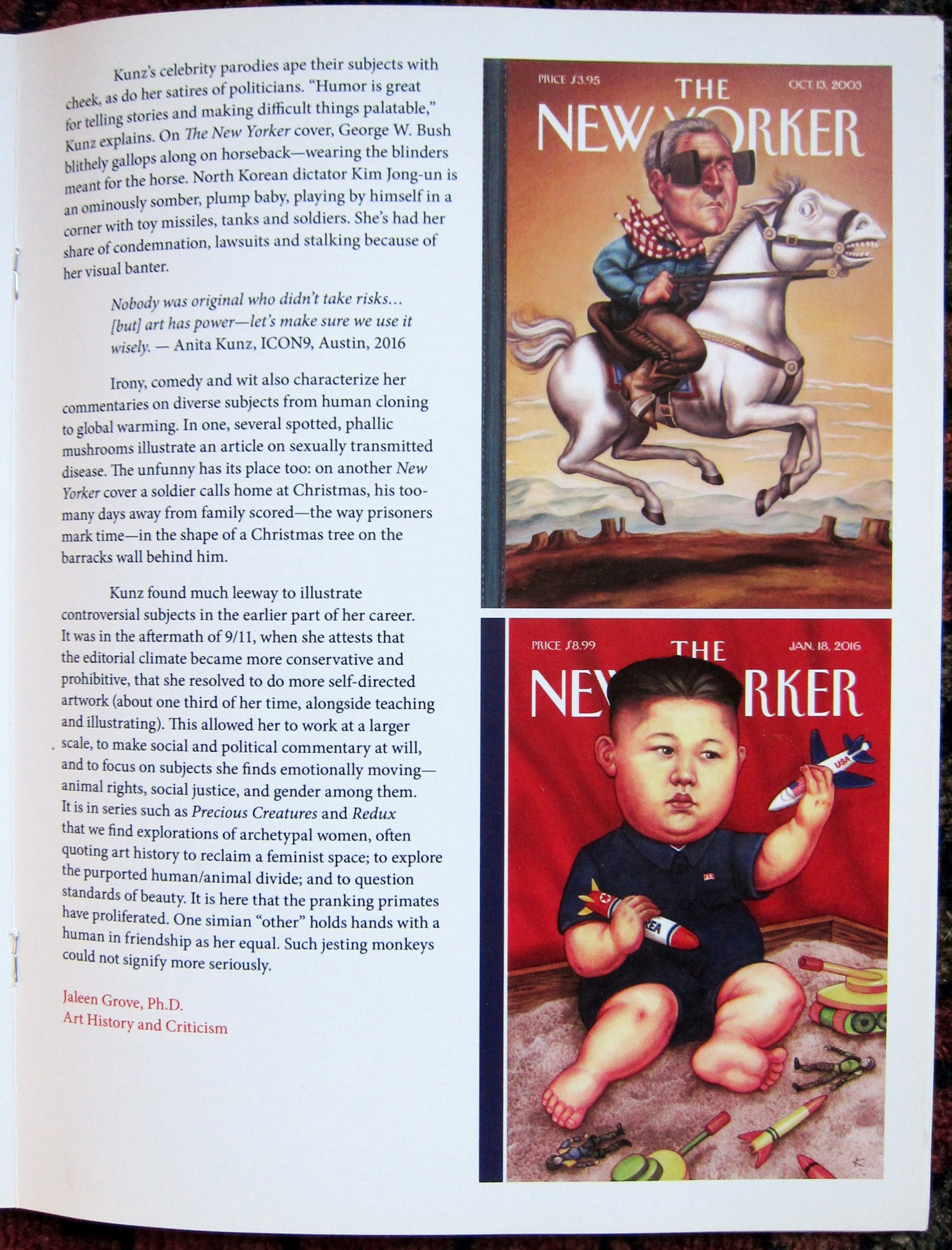