“Johnny Canuck” and “Jack Canuck” were two names used for the political cartoon personification of Canada beginning in the late nineteenth century although “Jack Canuck” probably came first. In the hands of cartoonists like Lou Skuce and C.W. Jefferys, “Jack or Johnny” Canuck” was pictured as a very physical outdoors type with a no nonsense approach to issues and moral authority.

With the outbreak of World War 2 the editorial aspects of the character disappeared and he split into two patriotic heroes. In “Monty and Johnny” he became the quintessential Canadian soldier. As “Johnny Canuck” in Dime Comics, he became a downed Canadian fighter pilot who became an underground fighter behind enemy lines.

From Dime Comics no. 1, February 1942, “Johnny” working behind lines fought with partisans and guerilla forces, against the Axis powers in Libya, Russia, Africa, China, Tibet, Yugoslavia and the South Pacific. Only in Dime no. 28 did he have an adventure, his last, in Canada. Perhaps his most memorable adventure was a mission that took him to Berlin and three encounters with Hitler himself in which “Johnny” slugs the Fuehrer each time.

It has been remarked that this “Johnny Canuck” created by Leo Bachle bore a striking resemblance to Bachle himself and Bachle remarked in an interview that his stories often incorporated references to his friends and school teachers from his school.

Around 1943, Bachle left to look for work in the comic book companies in New York. The “Johnny Canuck” stories were taken over first by André Kulbach and then Paul Dak. With the demise of Bell Features this “Johnny Canuck” disappeared.

Then in 1974 with the rise of Canadian cultural nationalism, he again burst on the scene more prominent than he had been in the 1940’s when he had been only one of many stories in an anthology. Ken Gass, the Artistic Director of Factory Theatre Lab, wrote and directed Hurray For Johnny Canuck which opened 30 November 1974. The play included Corporal Dixon, Derek Bras D’Or , Major Domo and other characters from Bell Features The play itself was affectionate nostalgia mixed with a poke of fun at the original stories. It was so popular that Factory Theatre Lab held it over for a further two weeks. Wally Michaels played “Johnny Canuck”. After this brief resurgence “Johnny Canuck” again sunk into obscurity.

He was resurrected again in 2013 and 2015, by the Cloudscape Comic Society in Vancouver in an effort to link their characters with some of the characters in the 1940’s comics. See CANADA JACK for information about how they linked that character to theirs.

In Epic Canadiana, vol. 1, the opening episode untitled and unaccredited, shows us an old “Johnny Canuck being offered a vague position as “…a symbol of trust and to bridge the gap between humans and metahumans …” by “Bernadette Wayne” CEO of Wayne Advances. She is a Cloudscape creation. “Johnny” refuses and we are given information why. He was leader of the “Allied Enigmas”, another Cloudscape invention, during the war and then after the war they were denigrated and dissolved. “Bernadette” asks him that before he finally decides, he read a dossier. This dossier which comprises the bulk of Epic Canadiana, vol. 1 is composed of the stories of the heroes invented by Cloudscape. In the final half of the “Johnny Canuck” episode which bookends these stories, he accepts the role that “Bernadette has offered. Having completed his function as bridge between the 1940’s comics and Cloudscape’s creations he again sinks into obscurity and is only rarely seen in Epic Canadiana vol. 2.

Guardians of the North: The National Superhero in Canadian Comic-Book Art. Writ., John Bell. National Archives of Canada, 1992: “Johnny Canuck”: 10 -13. A catalogue for the exhibit of the same name. 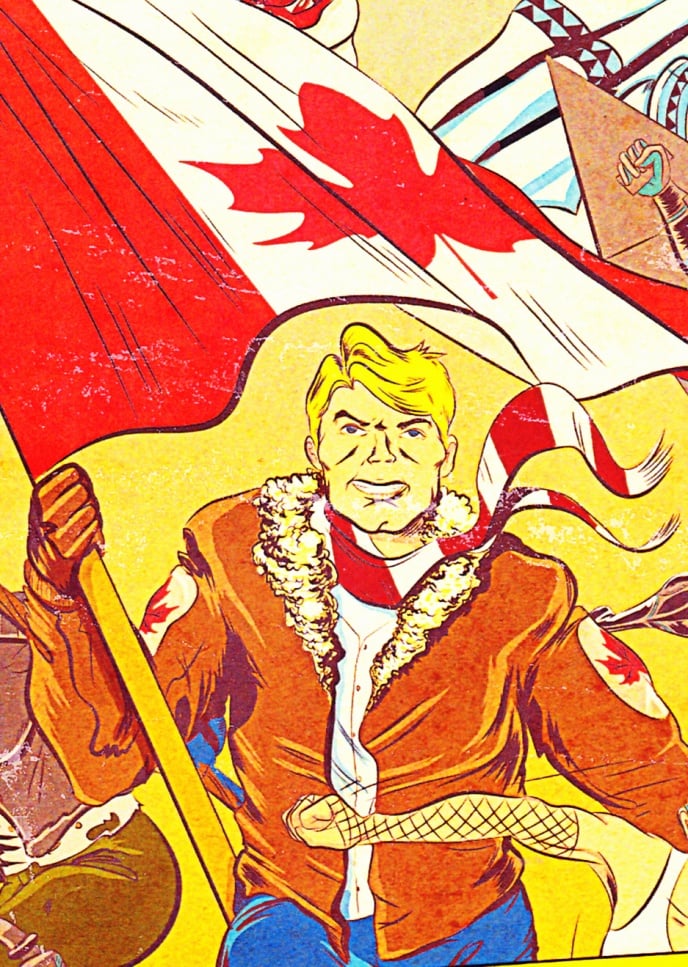