“Jack Canuck” and “Johnny Canuck” owe their origins to the editorial cartoonists of the Confederation period who in their cartoons revealed a fierce nationalism and intense antagonism to any suggestion of annexation to the United States. They personified Britain as “John Bull” or “Mrs. Britannia”, and the United States initially as “Brother or Cousin Jonathon” and “later as “Uncle Sam”. In the beginning Canada was represented either as a demur “Miss Canada” fending off the advances of the unsavory “Jonathon” or as a strapping upright youth called “Young Canada”. The latter evolved into either “Jack Canuck” or “Johnny or John Canuck”. Cartoonists altered between the two names but “Jack Canuck” was probably the first used in order to more sharply differentiate him from the sleazy “Brother or Cousin Jonathon”. As “Jonathon” gave way to “Uncle Sam” “Johnny or John Canuck” became more prominent. Although as late as 1946 (the cartoons see below) his editorial function was still in use.

The name varied but the character was essentially the same, an average straight talking, independent mustachioed Canadian wearing a Stetson hat and working clothes. Some have described him as naïve, a bit of a boy scout, but that seems an inaccurate description given the sharp editorial comment that accompanied his image. In the cartoons below, he has no illusions about the intentions of “Brother Jonathon” or that Britain is an unreliable defender of Canadian interests.

Although “Jack Canuck’s” primarily appeared on the international stage he was by no means restricted to it. In the early decades of the twentieth century, Charles Jefferys used “Jack Canuck” to comment on the growing strength of Western Canada. Lou Skuce used “Jack Canuck”, as the spirit of Canada making comments about domestic politics

The another version of “Jack Canuck” emerged during World War Two when George Rae’s “Canada Jack” appeared in Canadian Heroes Comics. Here he was converted from a persona of editorial criticism to a patriotic hero. The Stetson hat and work clothes were replaced by a gymnastic outfit. Unlike so many other Canadian wartime heroes who fought in Europe “Canada Jack” like his ancestor remained firmly on Canadian soil defending national interests against enemy intruders.

In 2013, Bevan Thomas and the Cloudscape Comics Society of Vancouver continued the “Jack” name creating “Canada Jacques” or “Jacques de Canada” a homosexual hero. In the “Canada Jacques” story, they also created their own version of Rae’s “Canada Jack” figure.

Another modern day incarnation, of the “Jack” name “Dominion Jack” was created by Jack Briglio and Ron Salas also in 2013.

Guardians of the North: The National Superhero in Canadian Comic-Book Art. Writ., John Bell. National Archives of Canada, 1992: 10-17. A catalogue for the exhibit of the same name. 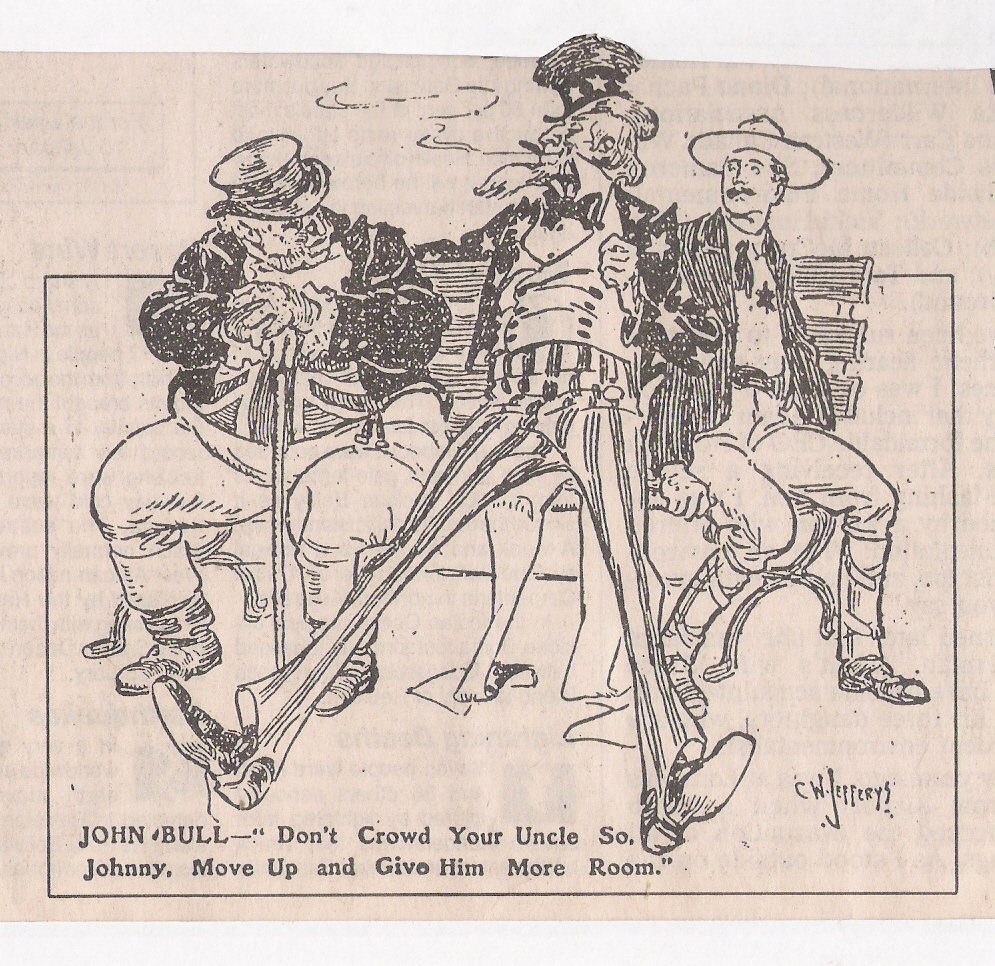 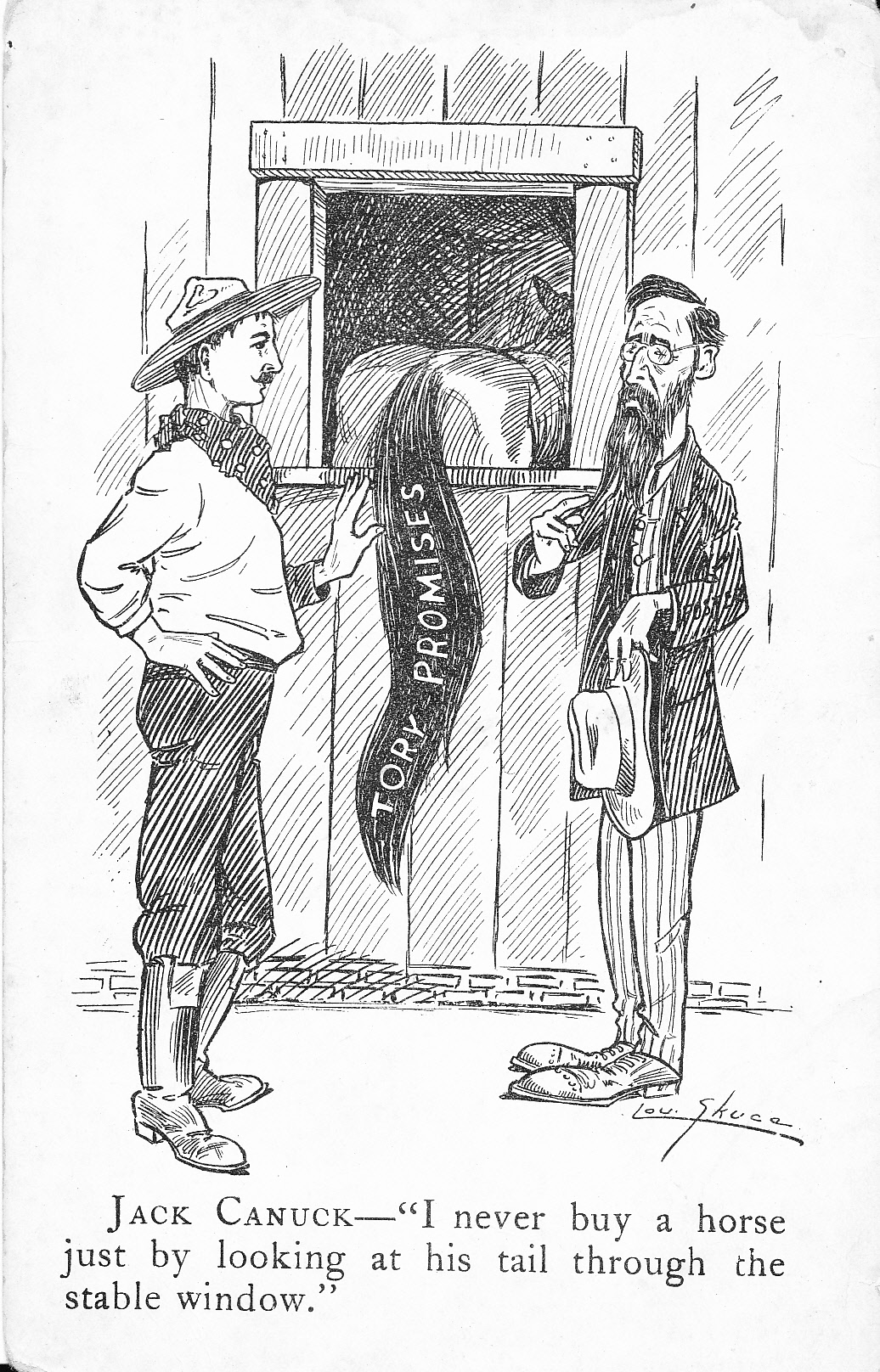 Here is a different series of cartoons, post cards featuring a triumphal Jack or Johnny Canuck, a benevolent John Bull and Uncle Sam and a rather envious Uncle Sam. These were produced in the first decade of the 1900’s when Canada was experiencing a boom and great prosperity. 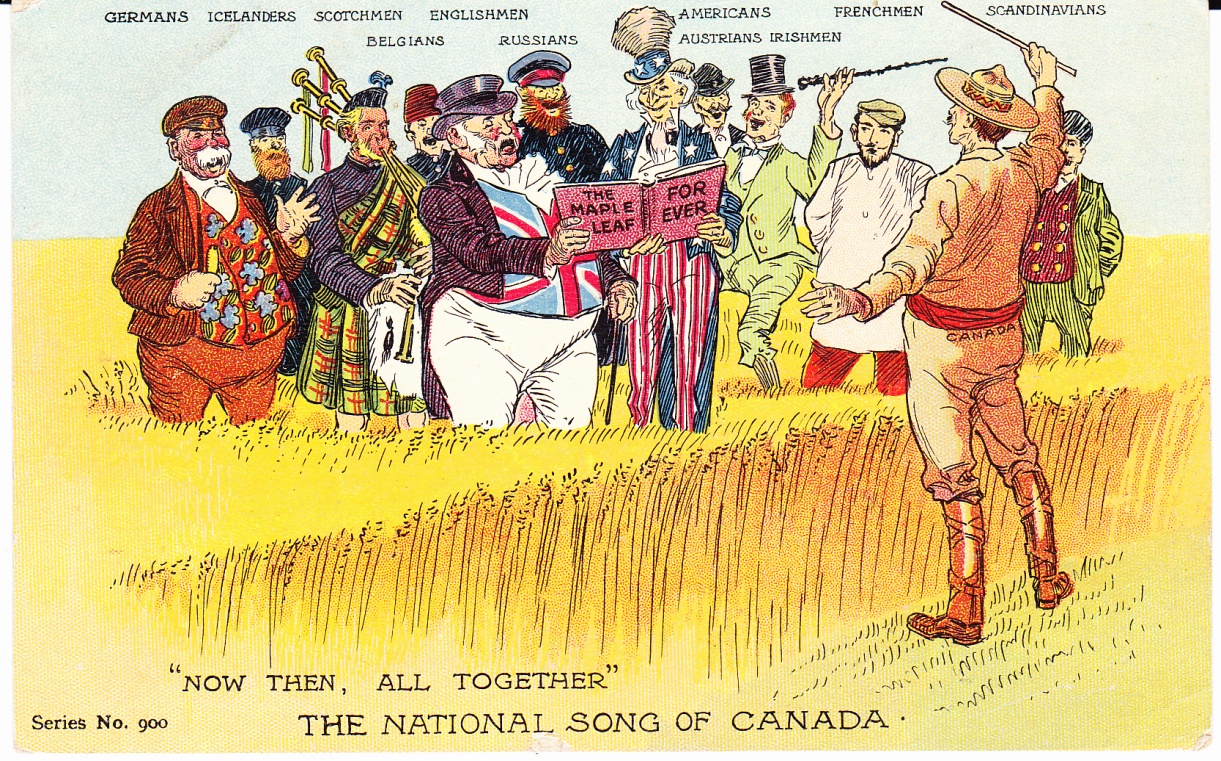 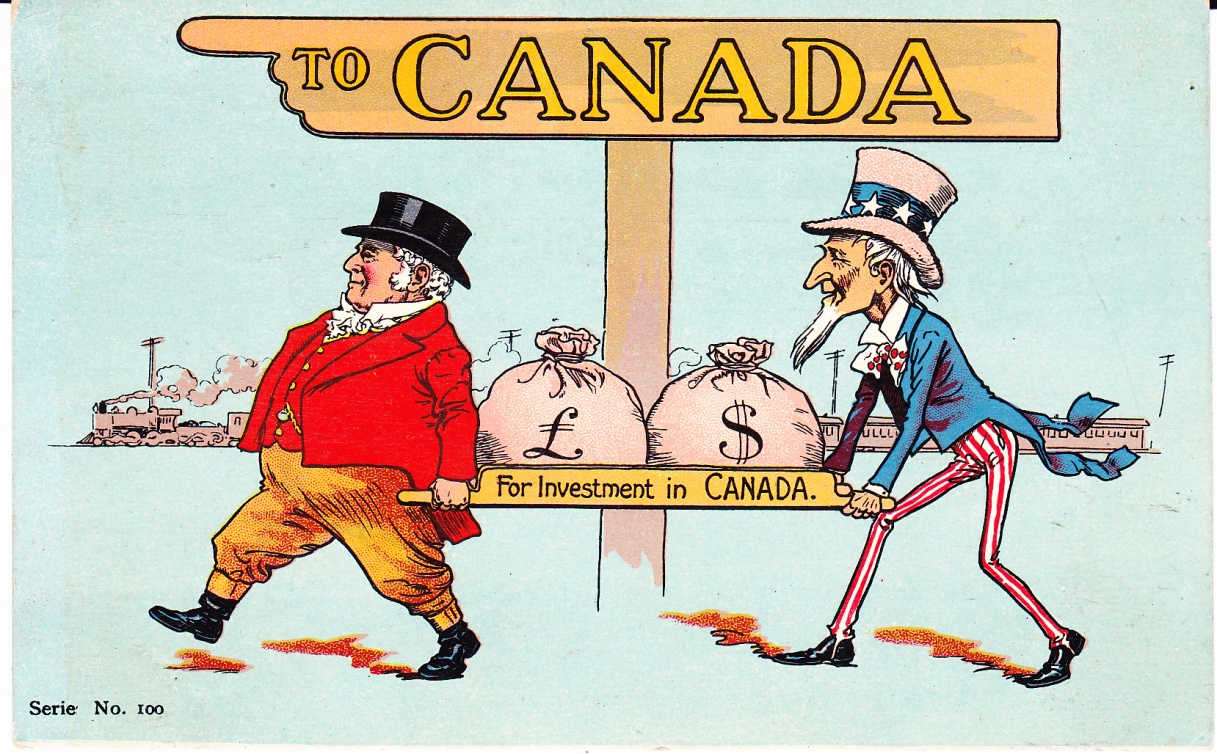 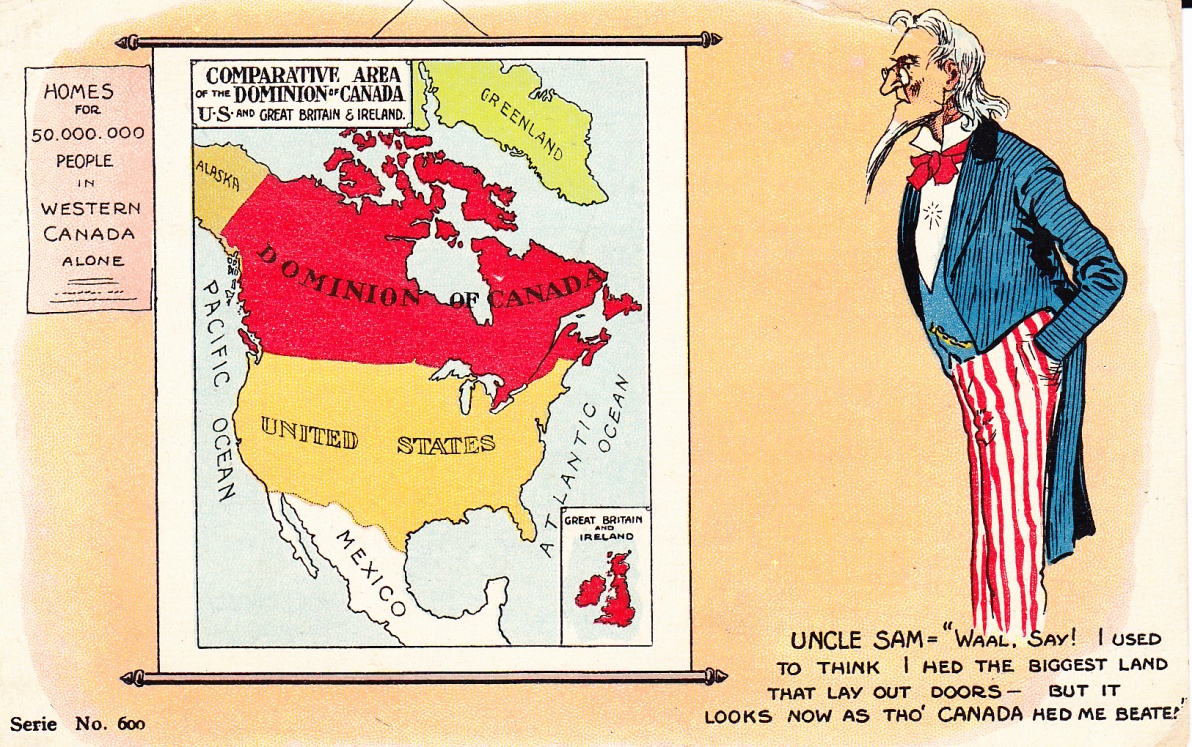 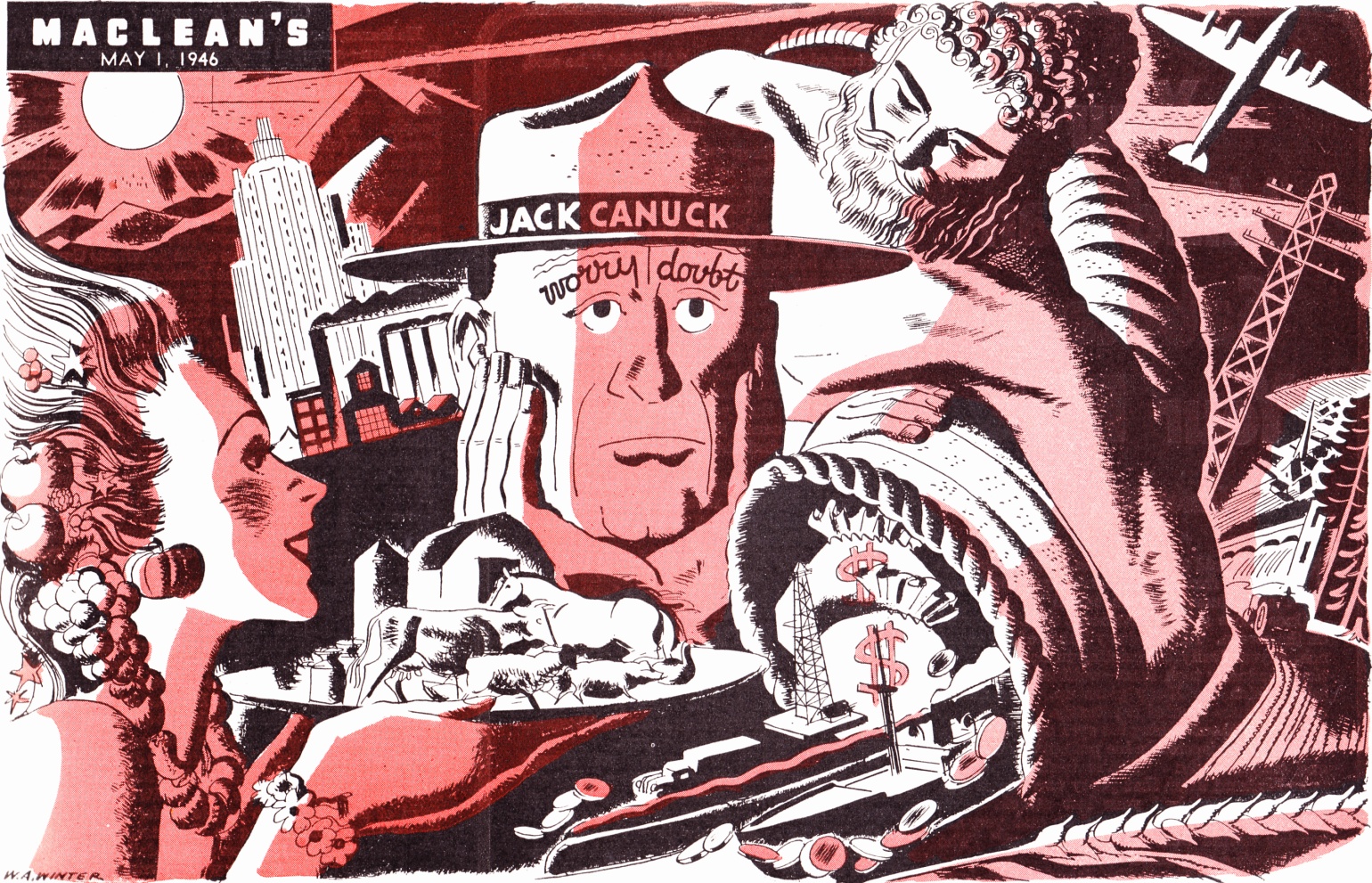 “Some of the fanciest brooding and doubting achieved anywhere goes on in Canada” Illus., W.A. Winter. Maclean’s 1 May 1946: 7. Jack Canuck still wearing the same hat continues his editorial function.