Created by Edward Hore, EHORE was a daily cartoon strip, that appeared in the Globe & Mail in the early 1980’s.

At both Queen’s and Osgoode, this self-taught cartoonist drew strips for the student newspapers. While in his first year of law school he expanded his efforts and began submitting his work to the Globe and Mail which after a while hired him to do a daily strip. EHORE ran from 13 October 1981 to, 30 July 1983. It also ran for a while in the Whig-Standard [Kingston]. It became a means by which Ed supported his studies while attending Osgood Hall

As suggested by the strips in the GALLERY below and apparent when perusing a more complete set, EHORE began as a more general humor strip directed at the ideas and attitudes circulating in the 1980’s but as time passed the focus shifted to comments on political issues and personalities. As a result the strip was eventually dropped by the Globe & Mail for becoming too politically controversial, a characteristic well illustrated by the 17 March 1983 strip shown below. However, Ed continued to cartoon. He was published in the Lawyers Weekly and other publications even after he began practicing as a litigation lawyer mainly in the intellectual property area. He still cartoons the occasional comment on current incidents and for many years drew an annual Christmas card for his firm Hazzard & Hore.

My thanks go to Scott Simster whose enquiry about EHORE and its cartoonist started me on this background investigation of the strip, to Warren Clements former Globe & Mail editor and now owner of Nestlings Press who gave me the contact for Ed Hore and to Ed Hore who generously answered my questions. 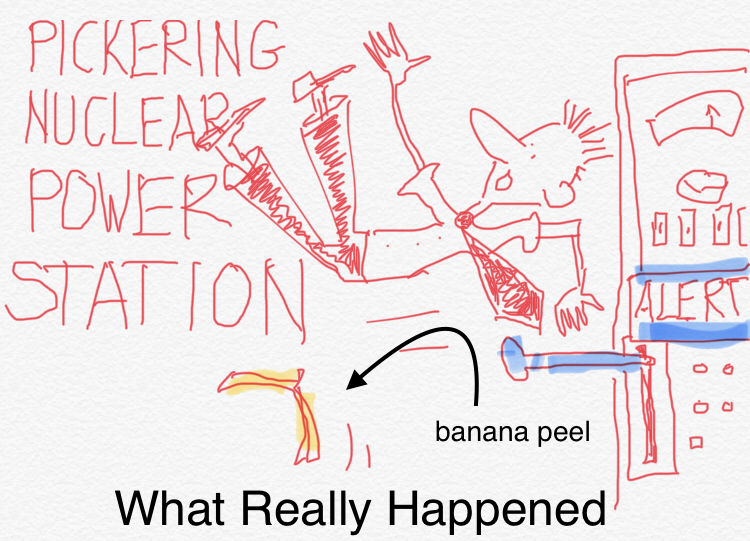 A comment about the mistaken warning of an emergency at the Pickering Nuclear Power Station near Toronto, 12 January 2020.