“Dizzy Don” & “Silly Soozie” Detective were created by “Manny” Easson who was born Manuel Eisenburg 10 June 1916 in Toronto. He changed is birth name. According to Ivan Kocmarek it first appeared as Bell Features & Publishing’s Funny Comics 1, early 1942, but by issue 2 (actually the issue had no number) the major title was Dizzy Don Detective with a minor title The Funny Comics. Some of the major unanswered questions about Manny is how did he enter the cartooning craft with a competent technique? Did he receive training was he self taught, had he been a cartoonist somewhere previously?

Funny Comics 1was a series of gag strips of various sizes. The second unnumbered issue suggests a change in direction which became the standard format, a major story followed by a section of gag strips, for all that followed. The principal characters for the series are established and a 31 page origin story follows. “Dizzy Don” began as a shoe salesman. Tired of this job he quit and set out to seek his fortune. He came to a carnival and was hired as a cashier. He then became a barker after the regular barker did not show up for work. From this start he became a comedian and entered the vaudeville circuit. Here he met and teamed up with “Bill Canary Bird”, a Stan Laurel type character. After playing the major vaudeville theatres and Broadway, they signed up for the “Sizzle Seltzer Broadcast” sponsored by who else but the “Sizzle Seltzer Corp.” Here they met other principal characters of the series, songstress “Shirley Watson” and “Hy Pressure” the announcer. The success of the show brought them into conflict with “Boss Gobble” head of “Ku Ku Tonic Company” and his thug assistant “Gat Goon”. After several attempts to sabotage the show “Gat Goon” kidnaps “Bill Canary Bird” who they take to a dirigible above the city. From the dirigible “Canary” dropped messages, one of which was found by “Don”. Discovering the messages came from the dirigible, “Don” hired a plane and with a bow and arrows shot down the dirigible. Everyone parachutes out including “Canary” who lands on top of the show’s broadcast building. “Don” also arrives at the building and the show goes on, but “Boss Gobble” vows to break up the show yet.

This issue suggested a major shift in the thinking of the creators and an advertisement in it confirms the shift. The creators and/or publisher offer $1.00 bills to each of the of the 25 readers who send in the best letters stating how much they liked “Dizzy Don” in his “new role” of detective. Manny and/or the publisher wanted to shift “Dizzy Don’s” from being a character in a series of gag strips to that of being a detective in adventure stories. The response was apparently supportive as “Dizzy Don” became an entertainer and amateur detective in adventure stories although he retained the role of “Dizzy” in smaller a backup section of gag cartoons.

Other changes occurred more slowly over the length of the series. The initial conflict between “Sizzle Seltzer Broadcast” and “Ku Ku Tonic Company” slowly gave way to conflicts with Nazi and Japanese agents then domestic criminals. While the early stories were ensemble pieces involving “Dizzy Don”, “Shirley Watson” and “Bill Canary Bird”, they slowly evolved into “Dizzy Don” handling the cases by himself. In issue 16, Manny introduced the “Silly Soozie” character. She became as prominent in the gag cartoon section as “Don” and appeared as a character is the major story of each issue. Finally while early issues involved contributions from other Bell artists, but by issue 13 they came to contain almost exclusively Manny’s work.

Paralleling Manny’s increasing editorial independence from Bell was his increasing business independence. As advertisements for Dizzy Don Paint Book and Silly Soozie Colouring Book both published by Dizzy Don Enterprises a company organized by Manny company appeared in Funny Comics with Dizzy Don issues as early as issue 17 at least. With issue 21, publication of Funny Comics with Dizzy Don was taken over by Dizzy Don Enterprises. The company published both issues 21Sept. 1946 and 22 October 1946 in colour, This was part of an industry wide transition. Companies which were not transitioning to colour were closing down. Bell Features was struggling to make the transition. Anglo-American had completed the process in 1945. Unfortunately no further issues were published after these two efforts..

After about a year had lapsed F. E. Howard Publications which had also taken over rights to the Bell Features & Publishing Co. characters, attempted two issues 3, April 1947 and 4 Sept./Oct. 1947. Issues 1 and 2 seem to have never been published. No subsequent “Dizzy Don” periodicals appeared.

After the collapse of the Canadian industry, Manny left cartooning and became a sales manager in Toronto for Harding Carpets. He died 24 November 1982 of cancer. A final question is why did this man with a talent for story-telling and cartooning appear to abandon the field completely? But then many talents in the industry did just that.

* The no number issue must be the second published since it is advertised that “The         Story Of The Mystery Of The Haunted House” will begin in the next issue which is           issue 3. 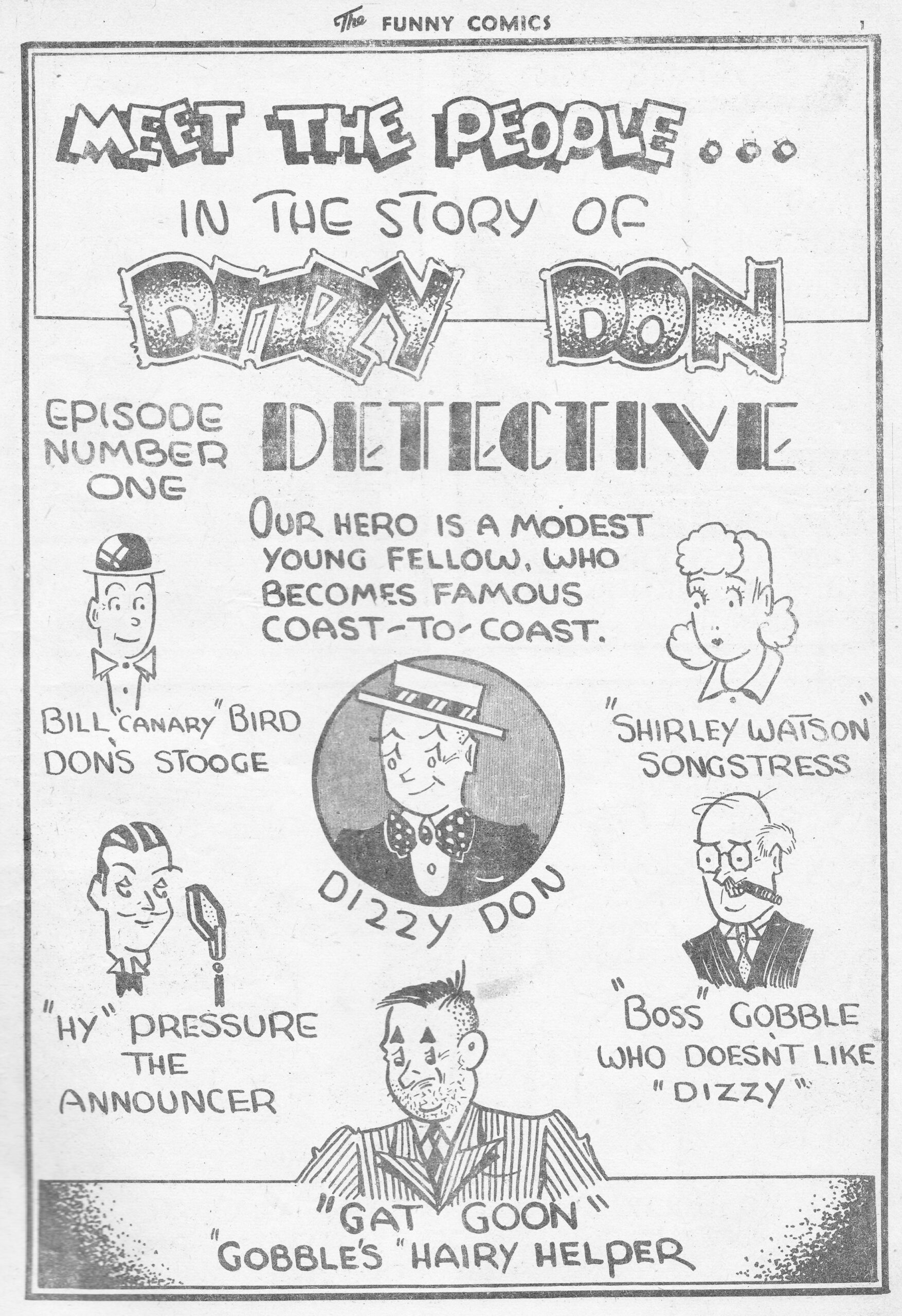 Dizzy Don Detective: The Funny Comics No number, no date: 1

Dizzy Don Detective: The Funny Comics No number, no date: From 32-33. 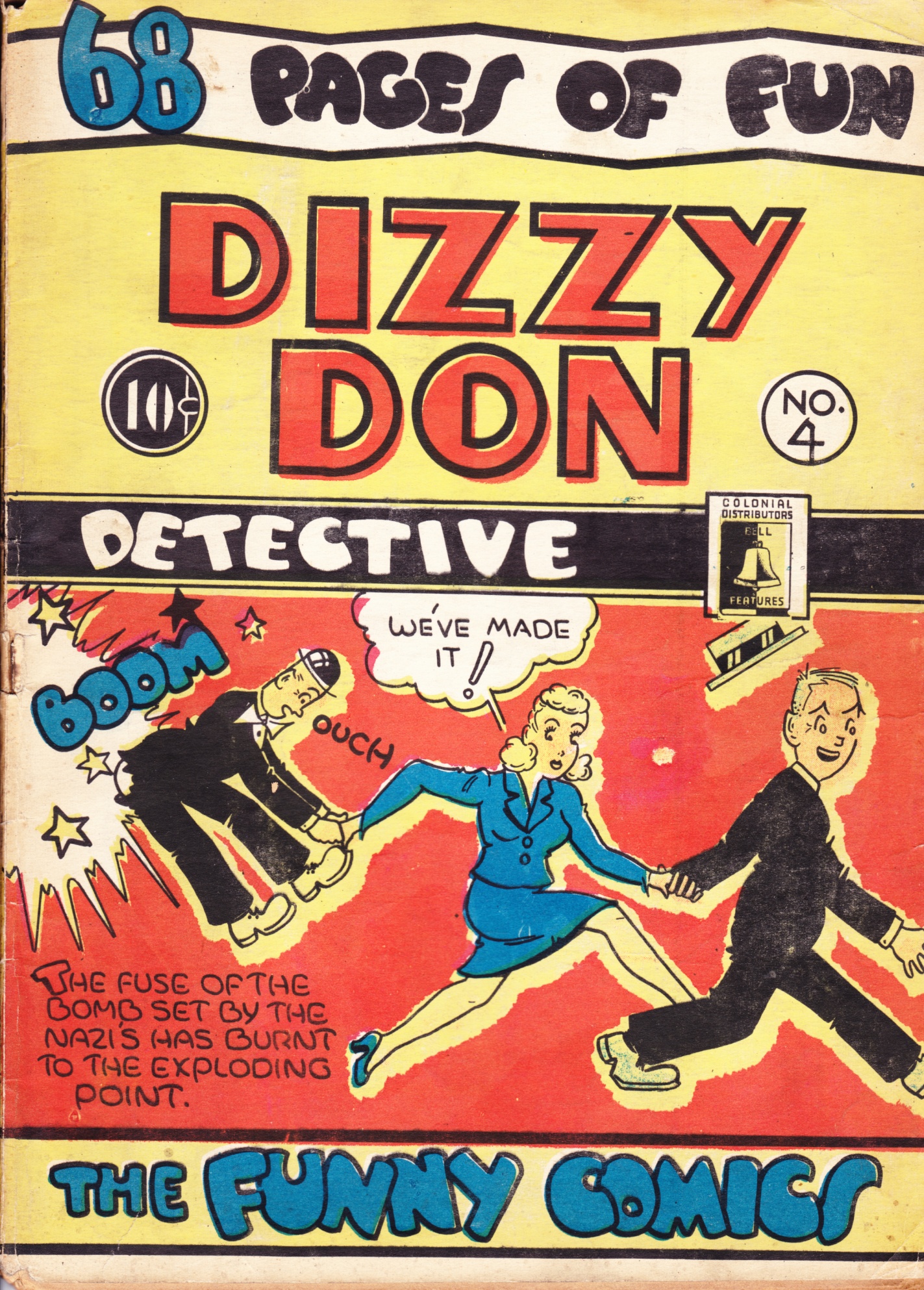 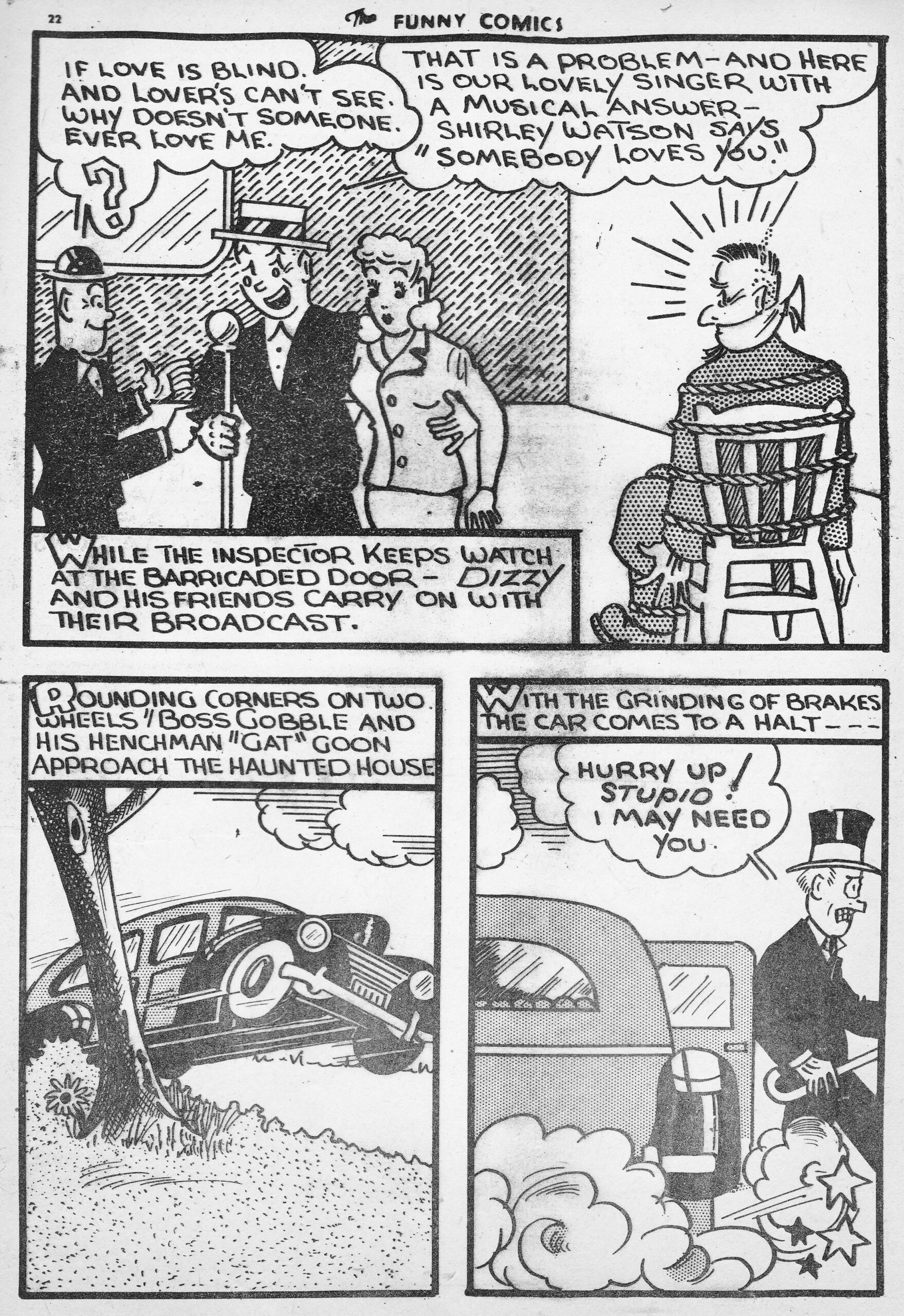 The Funny Comics with Dizzy Don 6, no date: Front cover. 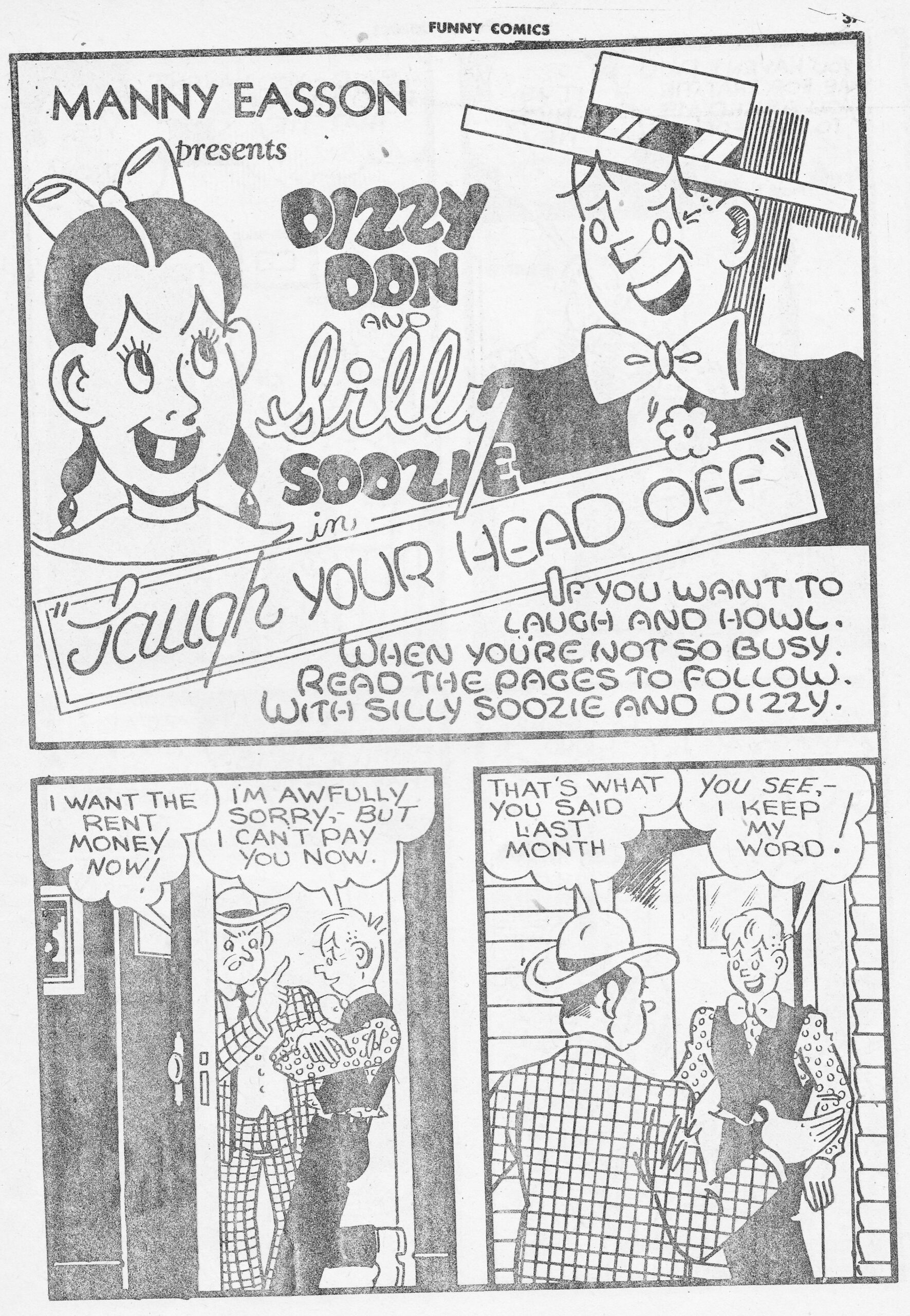 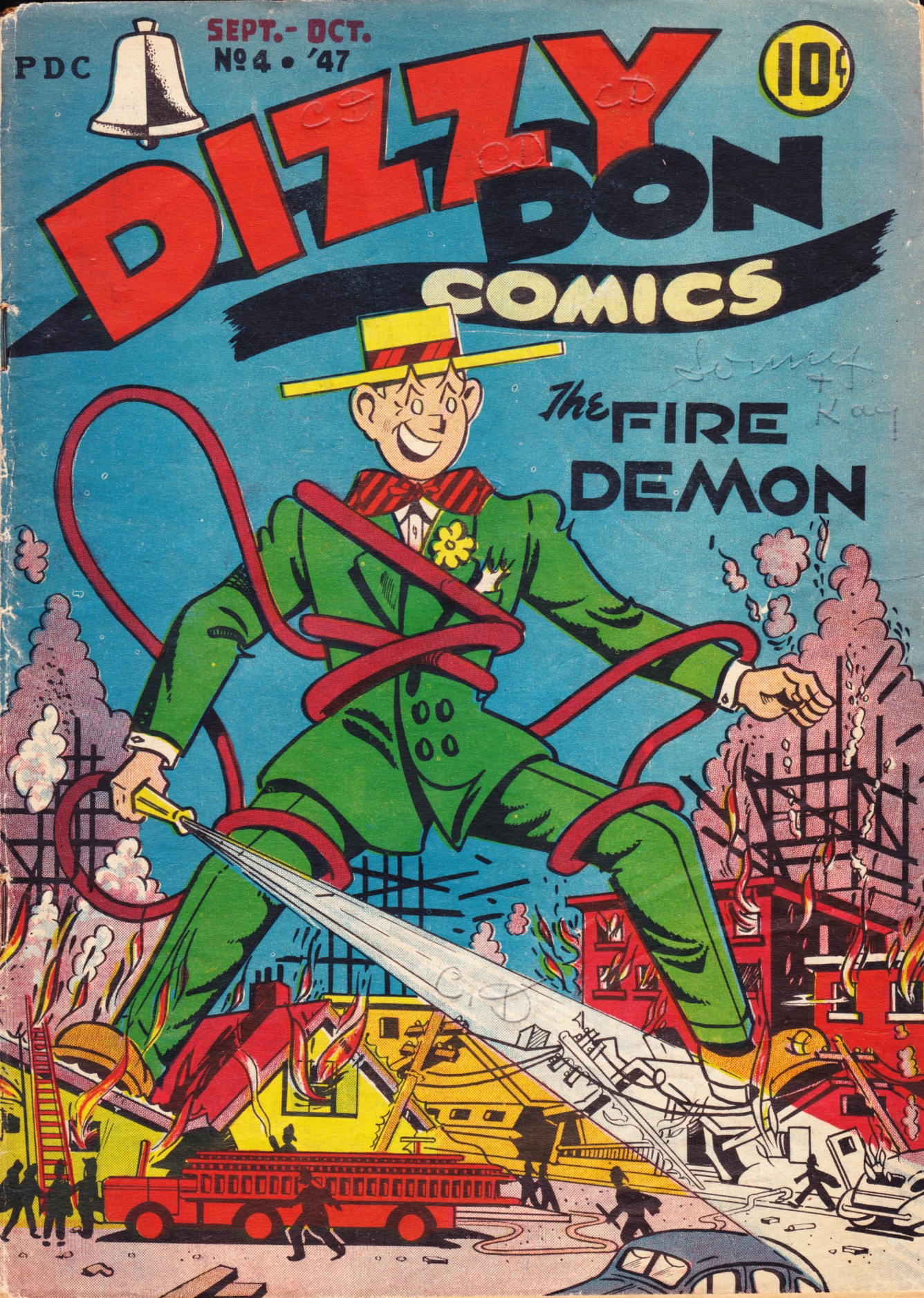 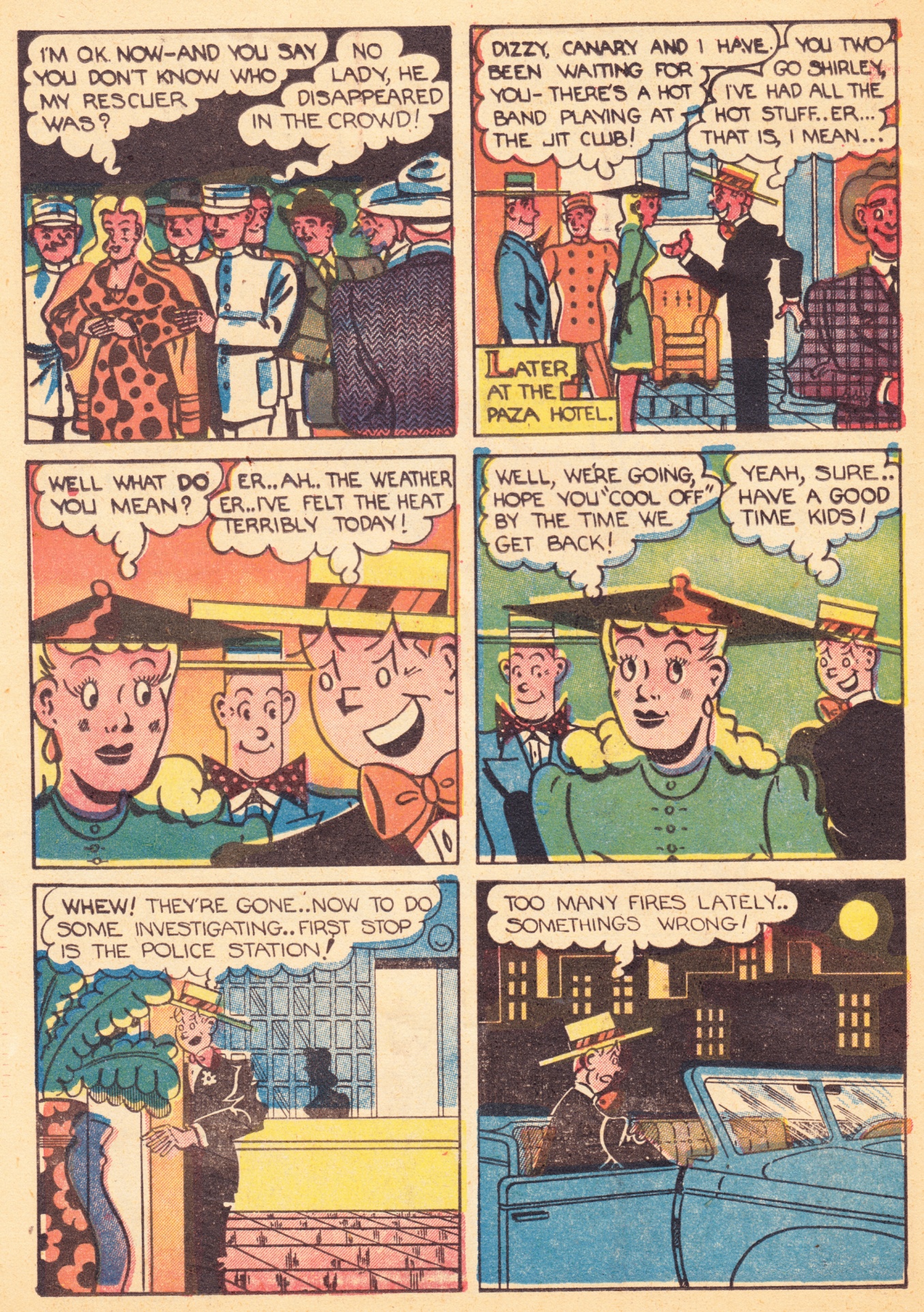 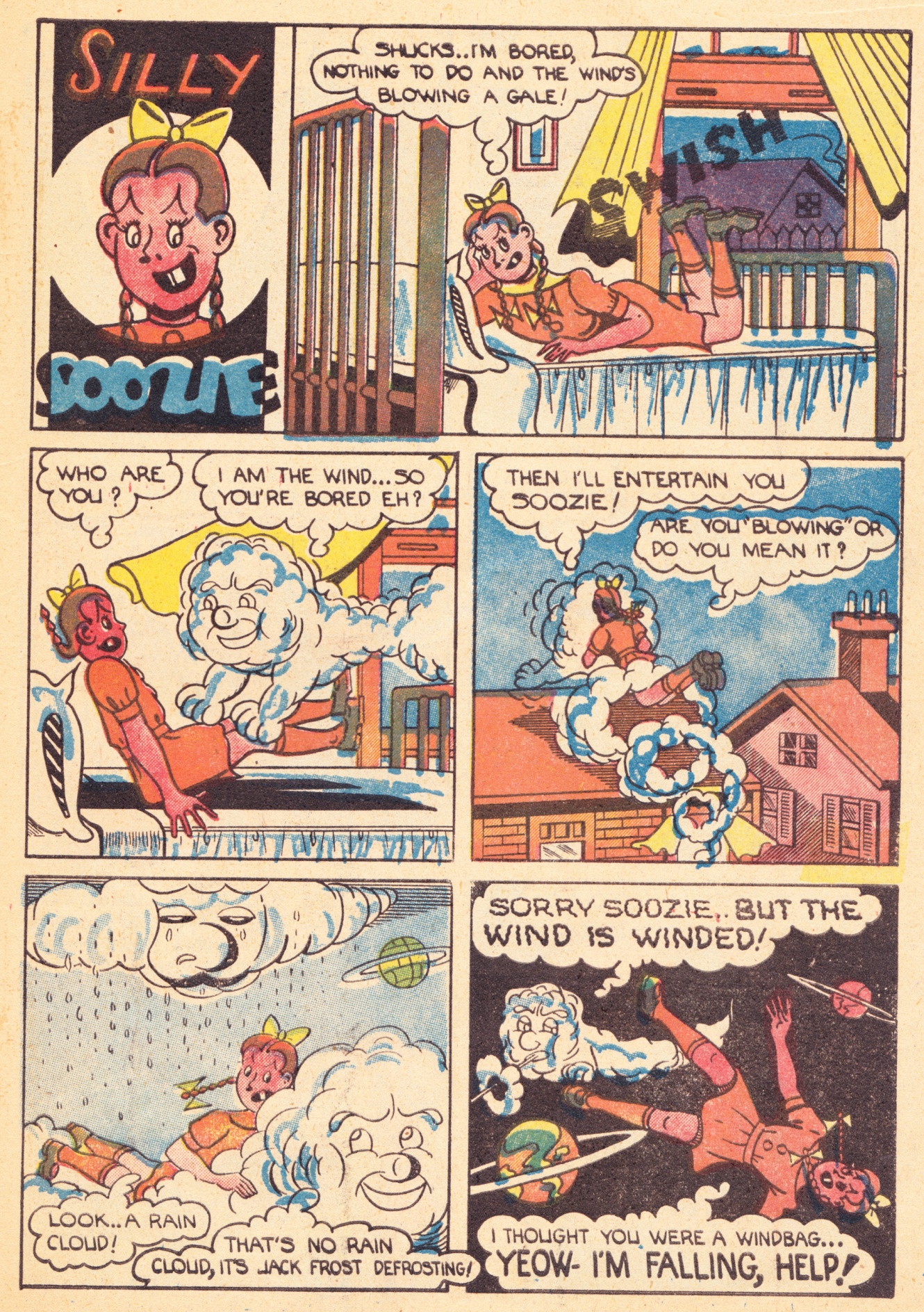 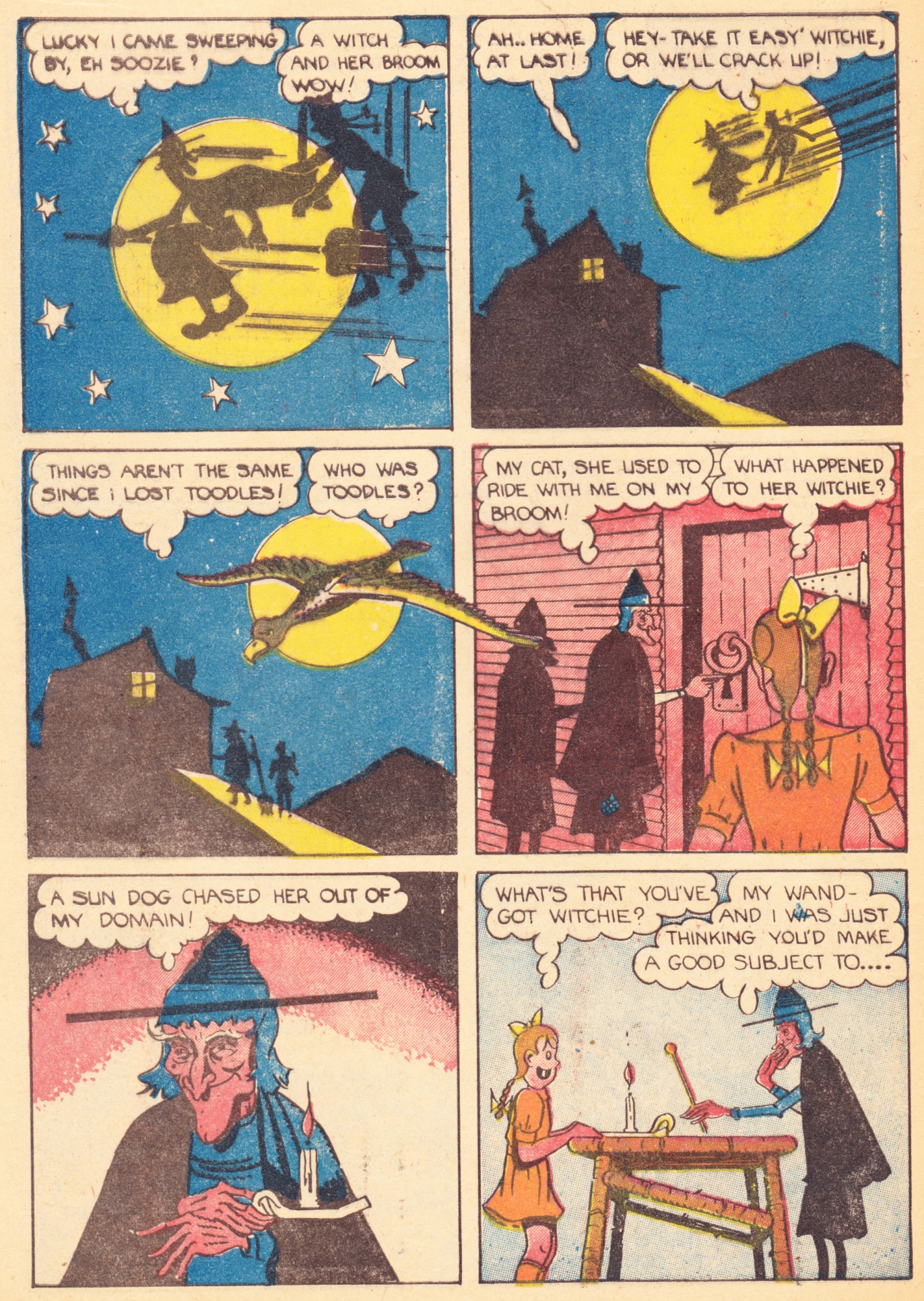