Born April 13, 1905, in Wolfville Nova Scotia, Robert Chambers loved drawing, even as a child. He took a year of art instruction at Acadia University’s Ladies’ Seminary under the late Lewis E. Smith. His inspiration to be a cartoonist occurred here when at 16 years old he saw an editorial cartoon by A. G. Racey of the Montreal Star. In later years he became a Fellow of the Nova Scotia College of Art.

As a teenager, he published a paper run off on a second-hand duplicator for 40 subscribers in his home town, where his father ran the local clothing store. Those early drawings depicted local events published in his homemade journal.

In 1924, at age 19, Chambers left the Annapolis valley for New York City – where he drew cartoons by day and attended classes at the Art Students’ League by night. He did animation for Fables Pictures Inc., earning $18 a week helping craft Aesop’s Fables for two years. He was later employed by Paul Terry, who would later create the classic Terrytoons. To make ends meet, he produced covers for sheet music, illustrations for pulp magazines and story illustrations for United Features Syndicate and the New York Evening Graphic.

In 1932 Chambers returned home. A year later, he was hired by the Halifax Chronicle, to be its cartoonist and photographer for $35 a week. He played a pivotal role in the Liberals’ winning election campaign, as Angus L. Macdonald unseated Gordon Harrington’s Conservative government. “I was hired by the Chronicle in Halifax to do editorial cartoons. Election day was Aug. 22 and Macdonald won, and on Aug. 23 I was fired,” Mr. Chambers recalled of the days when newspapers engaged directly in the partisan fray.

He returned to New York where he worked for National Screen Services but unable to obtain a work visa he returned to Halifax six months later, and was rehired by the Chronicle again as a photographer and cartoonist. Ironically, technical problems in operating the first Speedgraphic news camera used in Nova Scotia may have played a role in shaping Chambers’ career path. In I935, Tory Prime Minister R.B. Bennett was returning from London to Ottawa through the port of Halifax, where he was greeted by a camera-wielding Mr. Chambers. “I pointed it at him and the bulb exploded. Two or three fellows jumped me. They thought I had taken a shot at him,” Mr. Chambers reminisced years later. Then in April 1936, he was assigned to cover the Moose River gold mine disaster. It stretched into a 10-day drama, followed intensely around the world. In what Chambers later labelled “the worst moment of my life,” his camera shutter failed to open in the wee hours of April 23, as a survivor was lifted from the mine after days underground. Fortunately, the photographer from the rival Herald also missed the shot.

He was enticed to join the rival Halifax Herald on May 17, 1937 by a salary of $75 a week which was 2 1/2 times what he was being paid by the Chronicle. He succeeded Donald McRitchie. Another election was coming up and the Conservative paper wanted Chambers to do to the Liberals what he had succeeded in doing to the Conservatives in the previous election. “I suppose I lost my credibility by switching politics,” he reminisced, “they were quite right too. Offered me $75 a week … I would have joined any party with that kind of deal.” (117). The plan was not a success as the Halifax Chronicle used Chambers cartoons from the previous election to attack the Conservatives.

In the era of post World War 2 prosperity and the virtuoso cartoonist, this may seem a little crass, but it is worth remembering this was the era of the Great Depression and Chambers entire work-life at this point had been in an environment of precarious employment. In spite of the shaky start, Chamber’s relationship with The Halifax Herald lasted nearly four decades, ending only with his retirement.

In 1953 he received his first National Newspaper Award for a cartoon drawn when then-Liberal Prime Minister Louis St. Laurent was visiting Washington. This followed a 1950 citation of merit from the awards group,

In 1965 Saint Francis Xavier University awarded him an honorary degree for his career accomplishments. In 1966 he won his second National Newspaper Award for a cartoon portraying Mr. Diefenbaker’s amazing ability to survive as Conservative leader – the cartoon showed him suspended in mid-air after Dalton Camp and Gerda Munsinger had sawed off a branch near the trunk of a tree.

His Stanfield cartoons – they often featured Robert L. in long johns an oblique reference to the Stanfield family underwear company – poked fun at the Bluenose Premier turned federal Conservative leader with the gentle touch for which the artist became famous. Years later, he presented Mr. Stanfield with a collection of Stanfield cartoons which the former Premier donated to the Public Archives of Nova Scotia. Mr. Chambers, in a 1976 interview with The Canadian Press, said he considered Mr. Stanfield his best subject, confessing he was never too hard on the Truro-born politician because he’d often meet him on Halifax’s streets. “It would be pretty hard to face him with a bad cartoon in the morning paper.”

At the May 8, 1973, opening of an exhibition of Chambers’ cartoons, then Premier Mr. Regan praised him for the fact his work lacked “the element of bitterness” that was often the hallmark of other cartoonists. “An institution cannot be allowed to retire. It is not acceptable that you will ever entirely retire,” the Premier told Chambers.

As an editorial cartoonist spanning five decades Bob Chambers pointed out the follies of the politicians of his day but it was Chambers’ trademark character the bespectacled Little Man character who kept popping up in his cartoons that gave Nova Scotians the broadest smiles and helped make him a household name. The Little Man – often clad in only a barrel – trying to cope with the rigors of daily life be it tax hikes, political scandal or a nasty economy, somehow always seemed to cope with those challenges. As an editorial in the April 9, 1973, edition of this newspaper aptly concluded: “His Little Man is really the ordinary down-to-earth humble man on the street who finds a bit of humour in a world much too serious, much too often. His Little Man is but a caricature of himself.”

Mr. Chambers was as prolific as he was brilliant, turning out in his peak years, nine cartoons per week – six for the morning papers and three for the afternoon editions. In his early years on the job, he was called in at all hours to do front-page illustrations of breaking news, from shipwrecks to fires. Often, on his own time, he’d do artwork for charities or dash off an “original Chambers cartoon” to cheer up his ill friends or to commemorate special occasions.

His sports sketches – 30 of which he compiled in a 1989 book in collaboration with the late sports writer Alex Nickerson – are still collector’s items. He also published in book form collections of his cartoons for the years 1966, ’67, ’68 and ’72. And he compiled a small book Halifax During Wartime of about 15 illustrations in 1945.

Chambers at age 71 retired as cartoonist for The Halifax Herald Limited in May 1976. That was 53 years after his first cartoon had been published in the Halifax Chronicle, on May 2, 1923. (The subject was Nova Scotia seceding from the rest of Canada).

In the year he retired he was invested as a member of the Order of Canada. The Ottawa ceremony was a special night for the Nova Scotia cartoonist, who shared the spotlight with the likes of then Prime Minister Pierre Trudeau, Governor General Jules Leger and famed ballet dancer Karen Kain. “I was just a regular hick,” Mr. Chambers fondly recalled years later. “I got all the place cards from the table. I got Trudeau’s cigar, which he didn’t smoke, and I have that.” In the same year he received an honorary degree from Dalhousie University. The following year 1977 he was made a member of the Canadian News Hall of Fame. This latter honour had been bestowed on only one other Nova Scotian – Joseph Howe. Finally in 1994 his hometown Acadia University granted him an honorary degree. .

Cartoons by Chambers ’66. McCurdy Publishing, no date. A collection of 1965 -1966 cartoons from the Chronicle-Herald and Mail-Star.

Cartoons by Chambers ’67. Halifax: McCurdy Publishing, no date. A collection of 1967 cartoons from the Chronicle-Herald and Mail-Star.

Cartoons by Chambers ’68. Halifax: McCurdy Publishing, no date. A collection of 1968 cartoons from the Chronicle-Herald and Mail-Star.

Cartoons by Chambers ’72 Halifax: Petheric Press, 1972.A collection of 1971-1972 cartoons from the Chronicle-Herald and Mail-Star.

Halifax in Wartime. Halifax Herald & Halifax Mail, 1943. A collection of illustrations with explanations that appeared in the Halifax Mail in 1943. 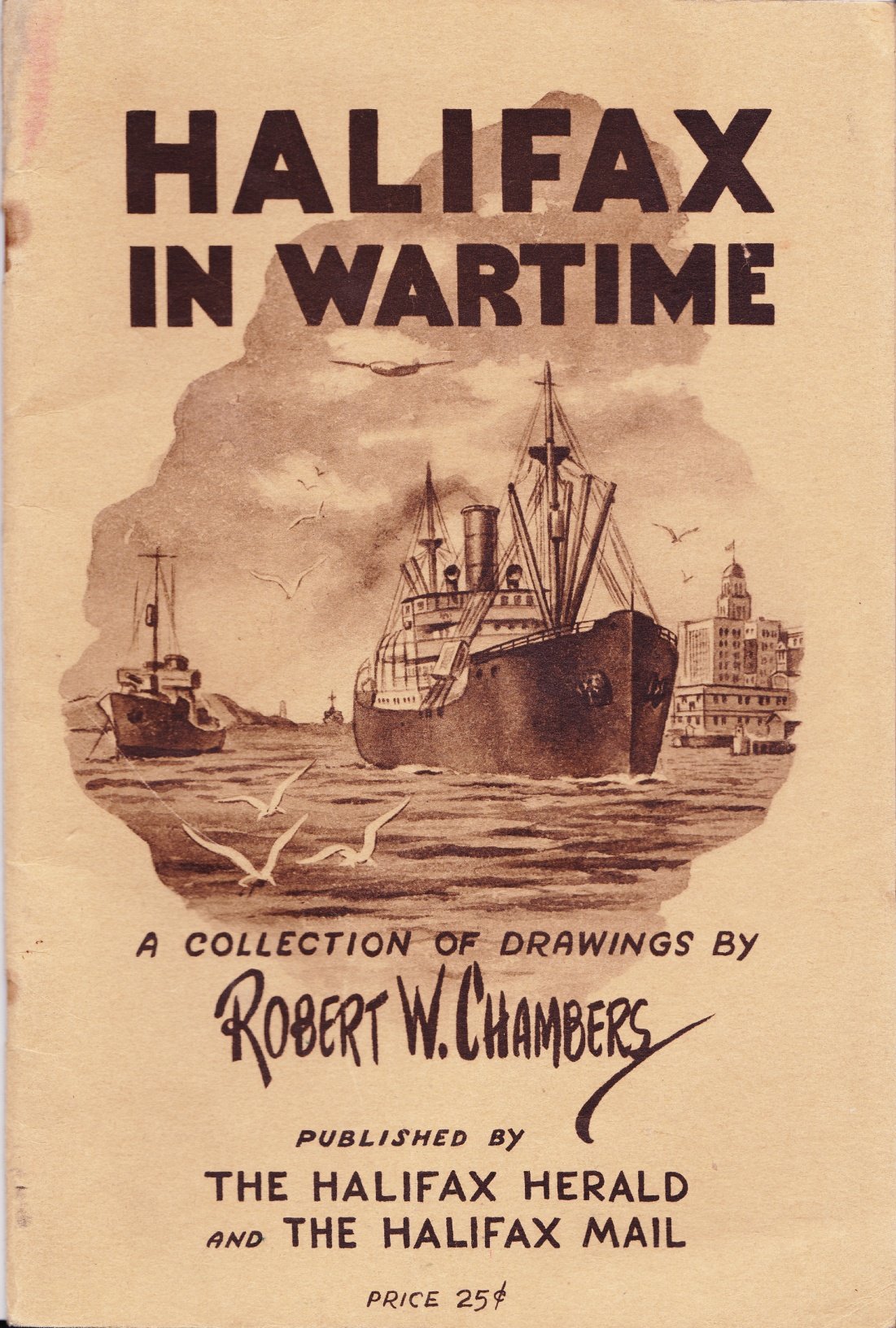 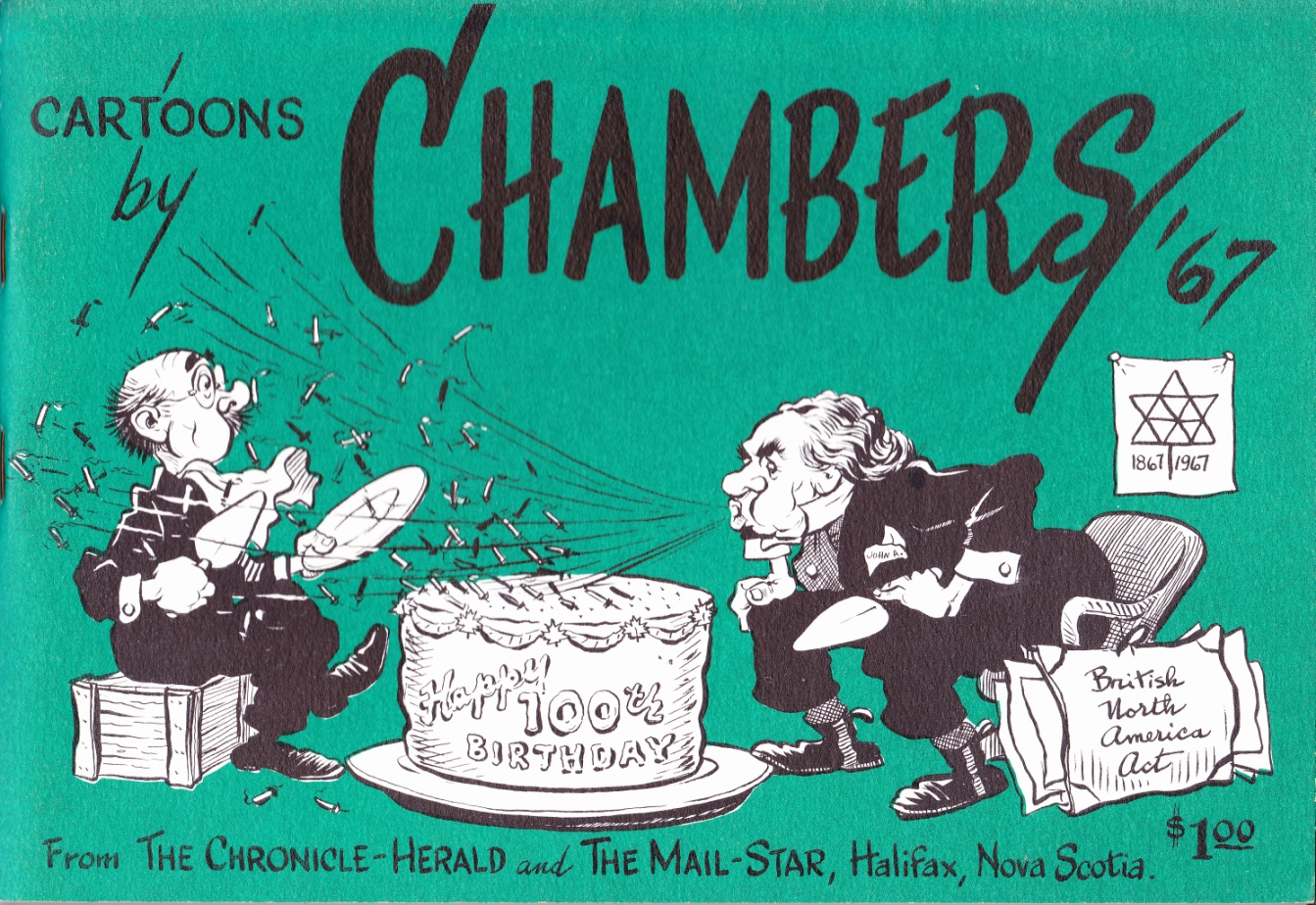 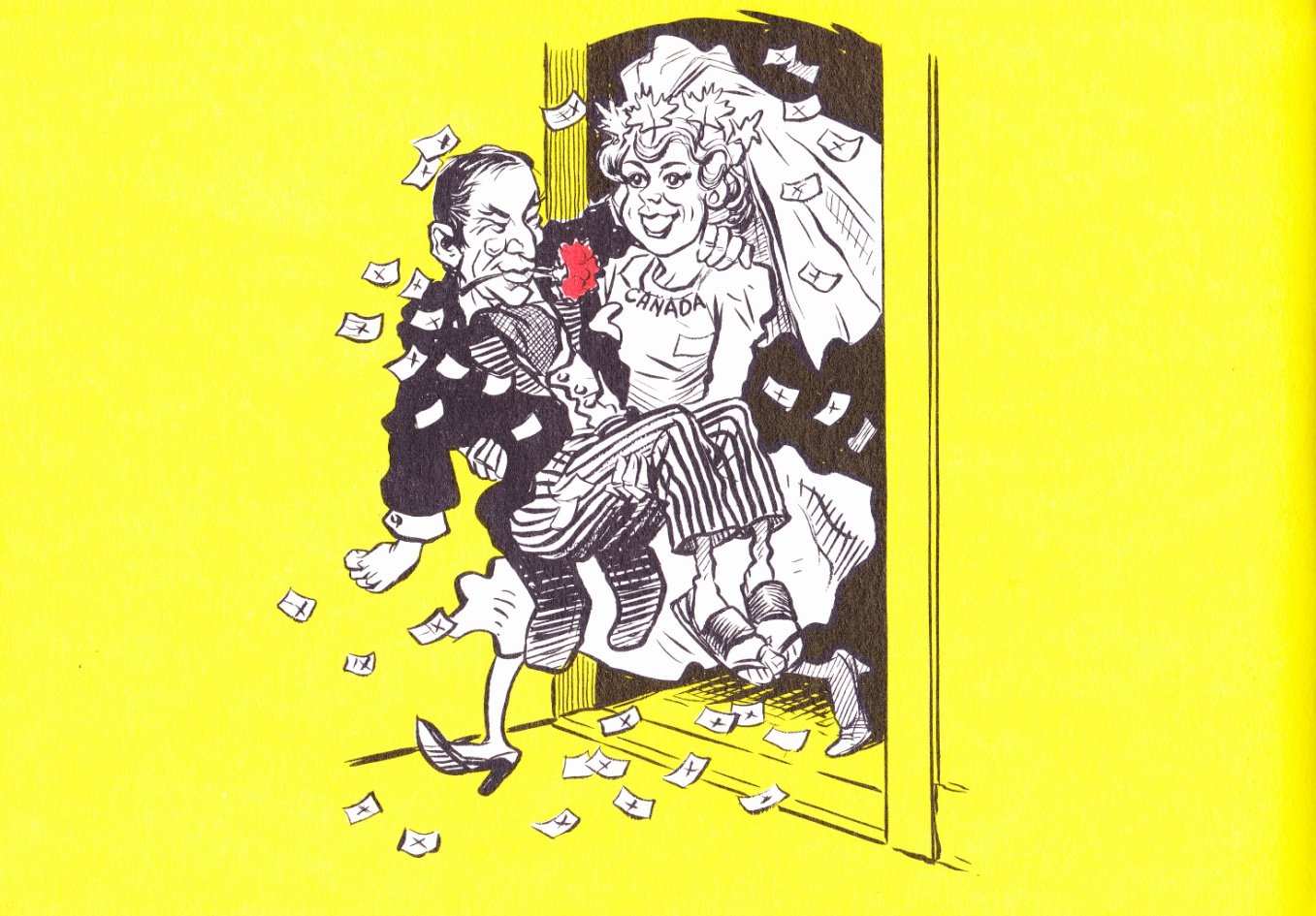 Cartoons by Chambers ’68, Back Cover. 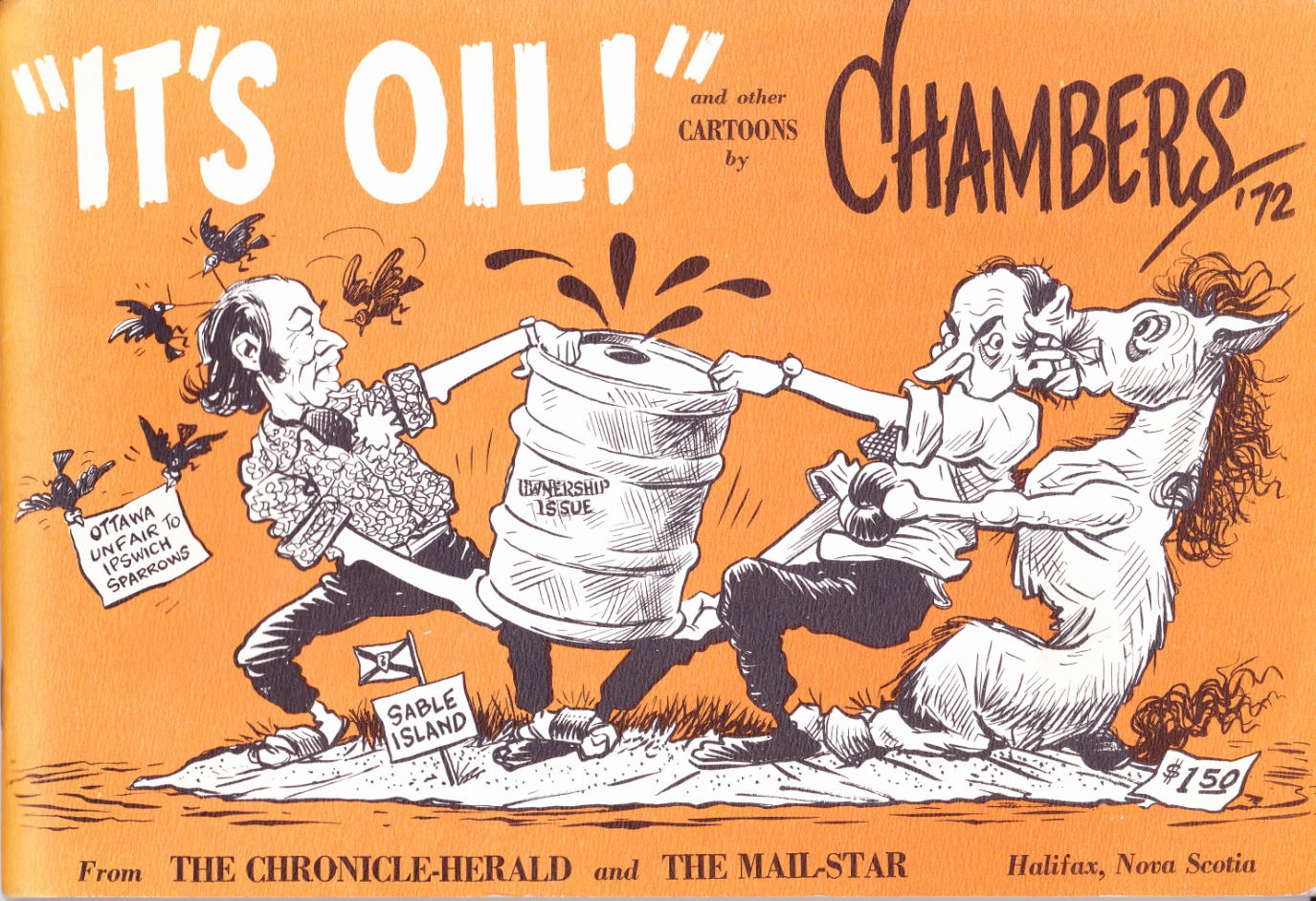