To create his character Ross Saakle borrowed liberally from the Batman and Superman models. A Canadian orphan whose parents were murdered by a criminal, lives for twenty years with “Yogi” in the Temple of Aidni in the Himalayan Mountains. He is transformed into a hero with the same powers as Superman. He of course wants to avenge his parents by fighting criminals back in Canada. As the story progresses he forms a close relationship with a police commissioner.

“Captain Wonder’s” first encounter is with a mad scientist called Frank N. Stein where he saves the “girl” and her brother from being turned into monsters. The second and most interesting story in the “Captain Wonder” series is the three issue (9-11) tale where “Captain Wonder” battles Satan in order to save “the girl”. The tone of this story makes one think they are watching a battle between two comedians. It ends with “Captain Wonder” victorious but Satan planning a second round with this “worthy opponent”. It seemed like Ross was onto something with the devil theme, but unfortunately it was never revisited. Instead, the serial becomes a standard good guys versus bad guys feature. The energy seems to leak out of it..

In Triumph 18 “Captain Wonder” does a guest appearance in a “Speed Savage” story. In issues 22 and 23, to the usual mix of good guy versus bad guy Ross added a group of young lads. “Captain Wonder” shows them that bad guys are cowards not worth emulating. It was an interesting effort to reduce any attraction bad guys might have for young readers. This was not the first time Ross attempted to instruct his readers. Often the last panel of each adventure, was devoted to admonishing readers to help the Canadian war effort through buying Canada Savings Bonds. Back in Triumph 12, Ross had invited his readers to tell him about their ideas, slogans and activities in support of the war effort and he would publish them in the last panel of each “Captain Wonder” story. It was an effort that lasted only a couple of issues.

At least initially, “Captain Wonder” is different from most other Canadian wartime serials. Ross makes it very clear the episodes are located in Canada. From the beginning we are told he is returning to Canada to fight crime, and when place names are given they are Canadian locations, like the 1000 islands in the St Lawrence. Ross also made “Captain Wonder” saving damsels in distress a regular feature of his serial. Unlike nearly all of the other wartime serials, “Captain Wonder” episodes deal largely with gangsters and rarely with Nazi agents, although it is interesting how he incorporates references to the war through the side comments of the characters and as mentioned above each adventure usually ends with “Captain Wonder” encouraging readers to help the Canadian war effort.

Unlike the “Batman’ and “Superman” stories which are deadly serious, Ross injected a casual almost flippant tone into his tales with a liberal use of puns, wise cracks, in jokes and sight gags. He played with names like “Frank N. Stein”. Was “Dr. Ranting” the Canadian scientist a play on Dr. Banting the co-discoverer of insulin? Certainly “Bachle Bluffs” was a play on the name of his fellow cartoonist Leo Bachle. An example that joins his sense of place with his sense of humour occurs in the issue 8 story. The location of the Nazi agents’ base is an island among the St. Lawrence River’s thousands islands. At the climax of the story the Nazis and the island are blown up. In the last panel of the story we see “Captain Wonder” and his companions looking at a “Welcome To The 1000 Islands” sign where 1000 has been stroked out and 999 has been added.

As I said earlier the originality and vitality of the serial declines after the Satan story. Was he tiring of the character or was he simply overworked? He was at the time cartooning “Ace Barton”, “ The Noodle” and “Spike & Mike” while also cartooning and illustrating games, features and stories. Whatever the reason, “Captain Wonder’s” humorous battle with Satan is the strongest in this series.

*The pages for this story are out of order and some seem to be missing. 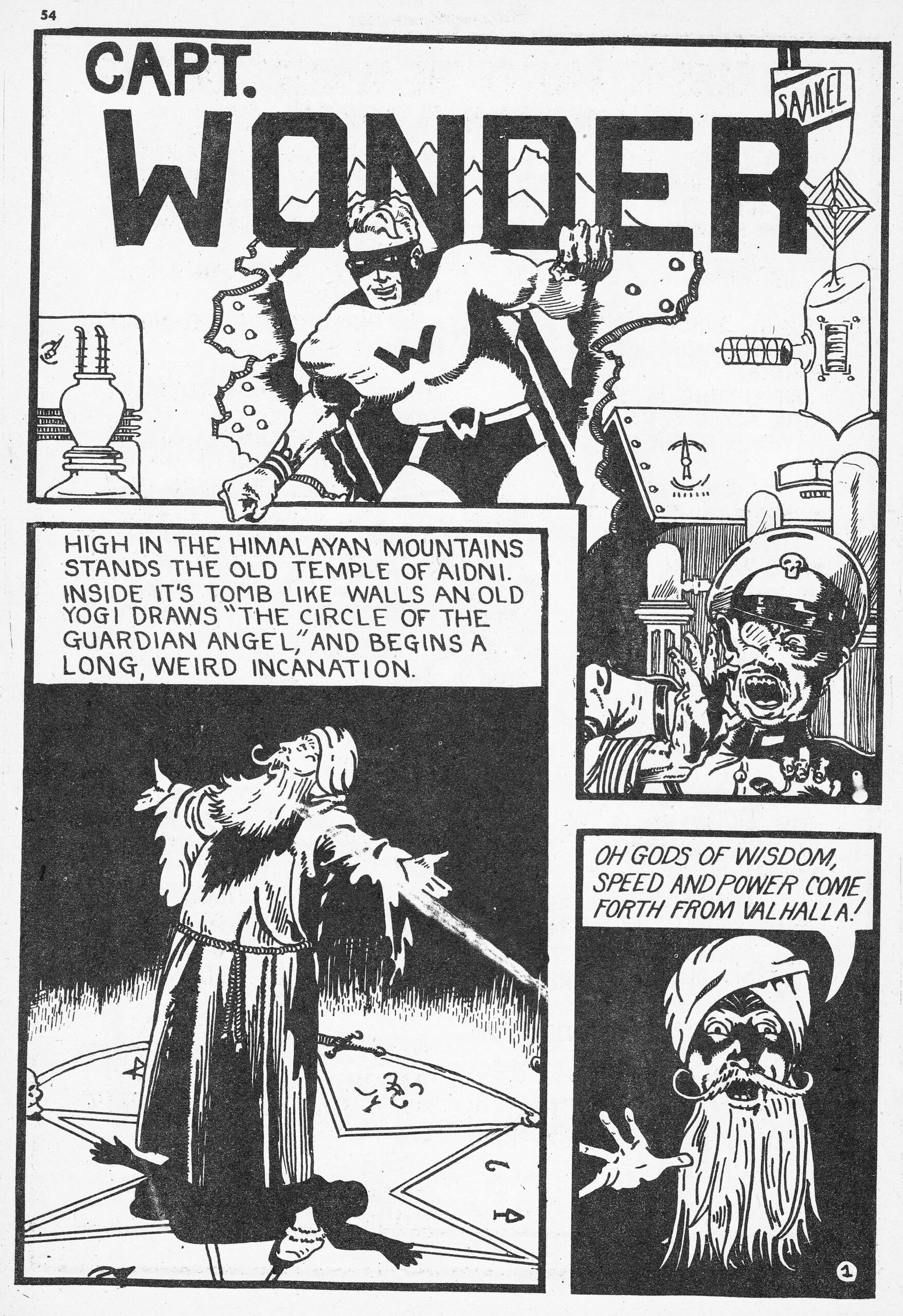