John based the character on a Brock Windsor, canoeist and outdoorsman who was a friend of Ralph Erwin owner of Salisbury House for which John drew advertisements. It is not known whether John met Brock but from the opening “Brok Windsor” episode, it is obvious John knew one story about him. During the Great Depression of the 1930’s, to sustain themselves, Brock and his wife Gerry, journeyed to an island in Canyon Lake in the Lake-of-the-Woods district during the summer and supported themselves through fishing and trading with the Ojibwe settlement at McIntosh.

The opening story tells of “Doctor Brok Windsor” spending a month each summer at Lake-of-the-Woods canoeing and fishing when he encounters a curious mist which he enters to explore and winds up in the mysterious land of “Chaqua” where he encounters a giant indigenous man, named “Torgon”. “Torgon” the only son of the chief of his community describes the land “Brok” has entered, its dangers and the “night air” of the land. They can communicate because “Brok” had previously learned the indigenous language spoken in the Lake-of-the-Woods area and this language was related to the language in “Chaqua”. For “Brok” the night air of “Chaqua” is both good news and bad news. The good news is that it heals injuries to his body and gives him super-human strength when he is angry, a characteristic later given to the “Hulk” by Stan Lee in 1962. The bad news is that it causes him to grow and he will grow so large he will die. The way to stop this growth is to drink the water of the “Blue Spring”. This serial then will be a quest story but before it begins “Torgon’ must return to his community to inform his father that he will guide “Brok” to the “Blue Spring”.. The community it turns out is a “vast city” and has advanced technology, including guns that shoot a green liquid that dissolves flesh, “Creepers” that can be best described as tanks, and “Zipcars” which function both as subway vehicles and aircraft and are driven by electromagnetism. The community has been taken over by rebels who have deposed “Torgon’s” father. In this case John has reversed the conventional motif of “good rebels” verses “bad authority” to “bad rebels” verses “good authority”. “Brok” and “Torgon” escape the rebels who had captured them earlier. Meet “Torgon’s” father who entrusts “Brok” with a message to give a supporter who has a large army (the errand is to be done after “Brok” has completed his quest to the “Blue Spring”).

They begin their journey during which they not only confront various fanciful wild and dangerous creatures but combat the rebels as well. During this journey, there is an extraordinary sequence in Better Comics December/January 1944-45 when “Brok” thanks “Torgon” for saving his life from “horned lions” by saying “Thank you Mon Ami! You surely saved my life that time.” He continues “That is French one of the tongues of our great bilingual nation” and concludes “If all men but understood each other completely. The imaginary need of segregation and the possibility of quarrels would vanish. So far it has been shown that people speaking but a single language fail to understand each other thoroughly …” It would take most Canadians till the Commission on Bilingualism and Biculturalism 1963-1969, to begin to embrace John’s vision of Canada.

They reach the “Blue Spring” and there they encounter “Starra” a young woman who is fleeing “The Ghostly Demutt of Kulott” who commands a group of disciples including the “Evil Priest” who commands an army of “Radans” or giant rats. They escape this apparition only to encounter another group of monsters “The Men of Styx”. While escaping them “Brok” using his enormous strength caused by anger moves a giant rock which transforms into “Apocultapoc… greatest witch doctor of the ancient Blackpaws”. Apparently for freeing him, he grants “Brok”, “Torgon” and “Starra” a wish each. “Brok” selflessly wishes to be returned immediately to the camp of Torgon’s” father, that before they arrive the rebel leader “Kobro” be dead and his supporters dispersed. They are transported to the camp, and all has been accomplished. “Torgon” then uses his wish to return “Brok to his own world and “Starra” apparently uses her wish to accompany “Brok”. This is all accomplished in a few panels.

Better Comics, July 1946, is a transition issue in which both “Brok” and “Starra” lose their enormous size but “Brok” retains his enormous strength triggered by anger and a new story in which “Brok” will go to rescue his friend “Chuck Rawlings” who is imprisoned in a monastery in the Himalayas is begun. “Chuck’s” imprisonment is made known to “Brok” through a dream. Only one episode of this serial was published before Maple Leaf Publishing ceased operations.

John’s story telling style is enlivened by his rich imagination which created the fantastical world of “Chaqua” and its weird creatures. The story line moves at a leisurely pace. At least in the early issues, he depended on text narrative to move the story. Even the word balloons tended to be lengthy. As a result, text tends to be more dominant in John’s early work than one usually finds in graphic narratives. At the same time, his panel designs are much more complex than one usually finds and are among the best if not the best to be found in wartime comics. One of his signature characteristics is the extensive use he makes of curvilinear borders.

Many of these initial features vanish after Better Comics February/March 1945. The curvilinear borders disappear. The complexity of panel design is greatly reduced. The narrative text declines while the the visual aspect takes on more prominence in moving the story. The episodes are reduced to a little more than have their original length. They give the appearance of being more rushed probably because of increased duties assumed by John who became Art Director in 1946. For the issues December/January 1946 and February/March 1946, Maple Leaf Comics attempted colour. While still very well drawn these episodes have none of the early features that made “Brok Windsor” outstanding. When Better Comics returned to black & white in its April/May 1946 issue, John seems to have lost interest in “Brok’s” “Chaqua” adventure. In this one episode, he summarizes the story up to “Brok’s” encounter with the “Men of Styx”, then engineers the escape of “Brok” Torgon’, and “Starra”, their return to “Torgon’s” father, the death of the rebel leader, and the return of “Brok’ and ‘Starra” to the Canadian landscape all in ten pages. In the next adventure where “Brok” sets out to free his friend “Chuck” the panels are a simple grid pattern, the text narrative has been almost completely replaced by word balloons with the visuals carrying the story. Gone are the fantastical elements replaced by a realistic world. John’s finest work which is among the best produced in the wartime industry, occurred in the five issues from April/May 1944 to December/January 1945 after this period it slowly transformed into the standard comic book format of the time. .

This merchandise accompanied Brok Windsor 1944-1946. As part of the Kickstarter Project. 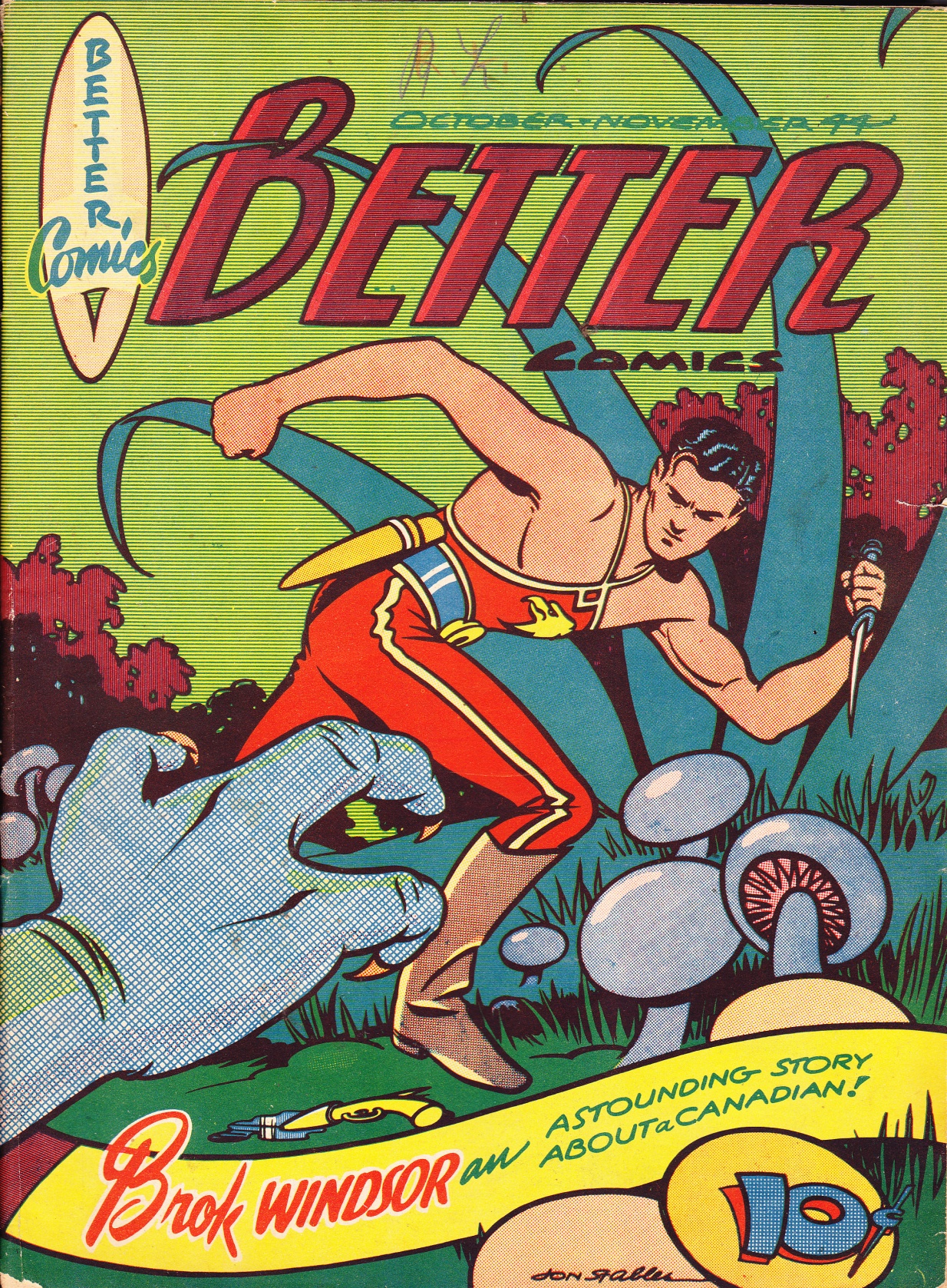 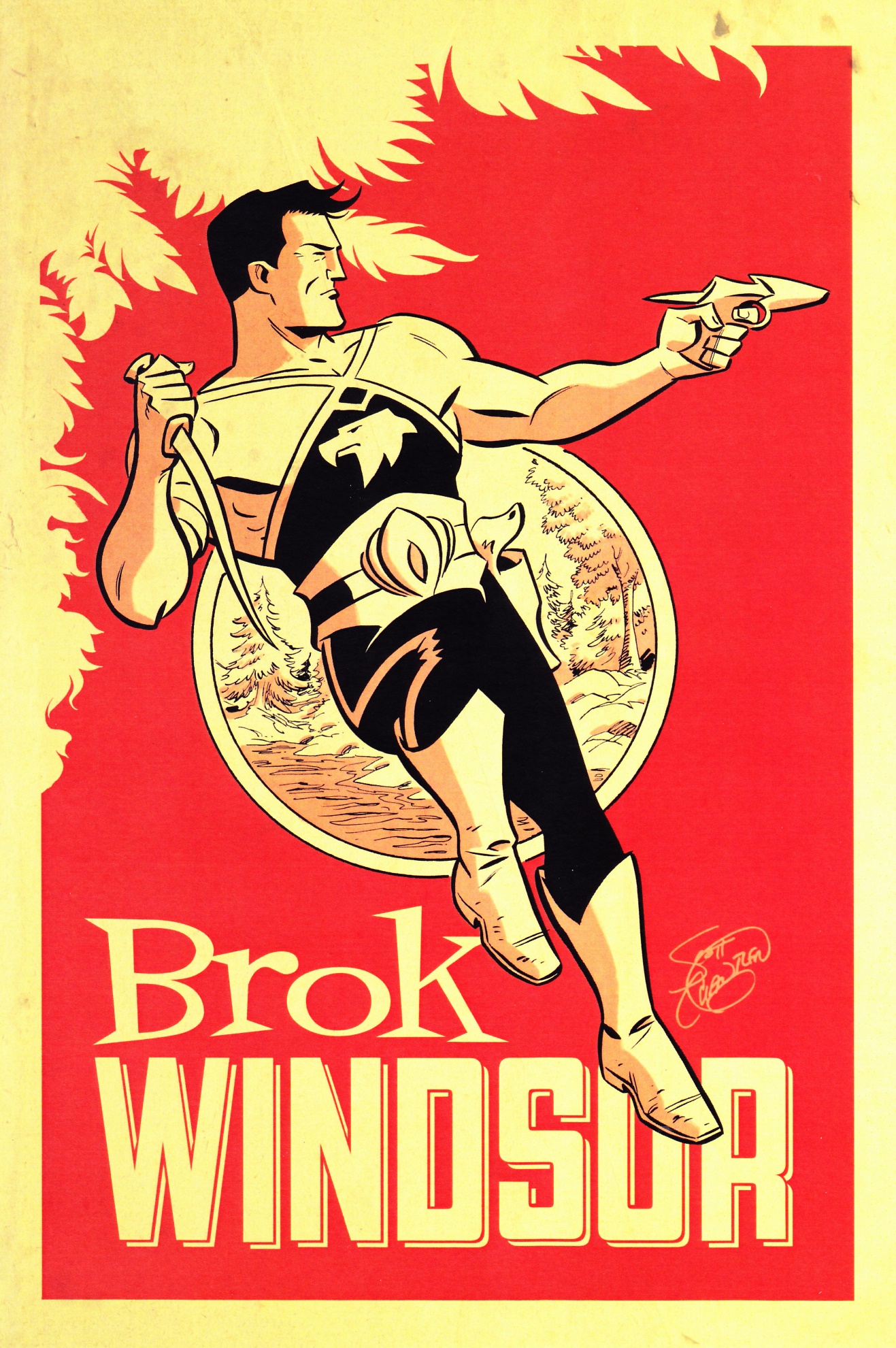