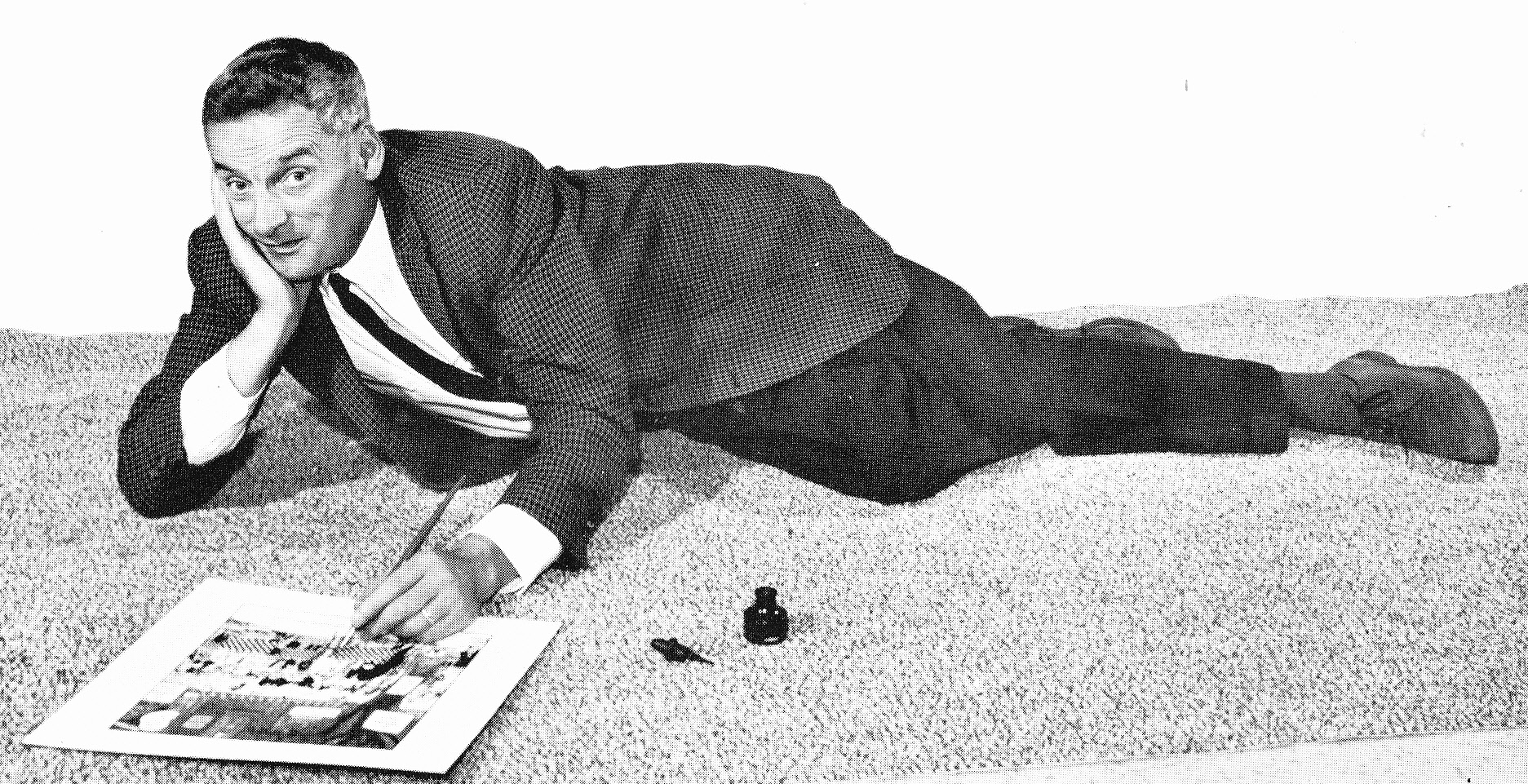 Born 13 June 1917, in Toronto to an unwed mother who had become pregnant in England and came to Canada to join her older sister Florence who lived in the city. Florence and her husband adopted him and he grew up knowing his biological mother as Auntie Daisy. He was an adult before he learned the truth. The family moved to Victoria when Sid was two years old.

He was a shy, skinny boy, with a severe stammer. It was so pronounced that in 1938 when he was 21 years old his father sent him to the National Hospital for Speech Disorders in New York. Tom Hawthorn reported that in later years, he liked to tell the story that on his return home, he announced, “I’m c-c-c-c-cured!”

Also at age 21, he took his first formal art lessons from Allan Edwards, a precocious talent who was two years younger than him and had followed him through South Park Elementary and Victoria High School, but who already had a studio on Broad Street. Pierre Berton also took lessons here.

He began his career by painting schedule cards for the Union Steamships in Vancouver, illustrating window cards for Victoria shops, and designing boxes and neon signs. He moved to Toronto where he painted billboards and did war illustrations for the Toronto Star.

The “War Exchange Conservation Act” halted among other things the importation of U.S. periodicals including comic books. A Canadian industry was born, and Sid found work as one of the freelancers in the stable of Educational Projects Inc., a Montreal-based company which brought out a single periodical Canadian Heroes. He drew cartoons of real wartime events some of which were told through the characters “Ace Deacon” and “Bos’n Bill” and he drew a number of the fictional “Canada Jack” stories.

At the end of the war, The Star Weekly magazine hired him as a freelance illustrator, but this employment ended when the publisher went the cheap route and began purchasing syndicated works from American artists. He spent much of the 1950s seeking work on the coast and in Ontario.

Peter Desbarats, in The Hecklers, noted that: “During this period, it became apparent, he developed a caustic assessment of the manners and moral values of his compatriots who populated the newer suburbs of Canada’s expanding cities.” The suburbs of Toronto were fertile ground for his humour especially “Don Mills” which in his cartoons became “Dawn Mills’.

In 1958, he was hired as a cartoonist by Victoria Times publisher Stuart Keate. Three years later he. began selling cartoons to the Toronto Daily Star, In 1962, he moved to Calgary to work for The Albertan, but continued freelancing for the Star a practice which lasted thirty years. He left The Albertan just before Vance Rodewalt arrived in 1970.

The Art Gallery of Greater Victoria held an exhibition of his works in 1973. His cartoons focused on social rather than political comment and came to carry two standard features. The “puddy tat,” a cynical Cheshire Cat with ridiculous stripes, appeared in a lower corner holding a sardonic sign and the biplane often towing banners like “Mild Isn’t It.” And “Aren’t the mountains pretty today?” In 1983, editorial cartoonists met at convention in Toronto, gathering one evening in the CN Tower restaurant high above the city. Roy Peterson, of the Vancouver Sun, hired an airplane to fly past towing a banner reading, “Mild, isn’t it?”

He quit drawing cartoons in 1989, retiring to Coombs on Vancouver Island where he was able to indulge in his passion for watercolour seascapes.

The largest collection, 1,344 of his originals is held in the Library and Archives Canada, in Ottawa. The Glenbow Museum in Calgary owns 70 originals that were published in The Albertan.

The Adventures of Robinson Crusoe. Adapted by Rose Halperin. 1944. 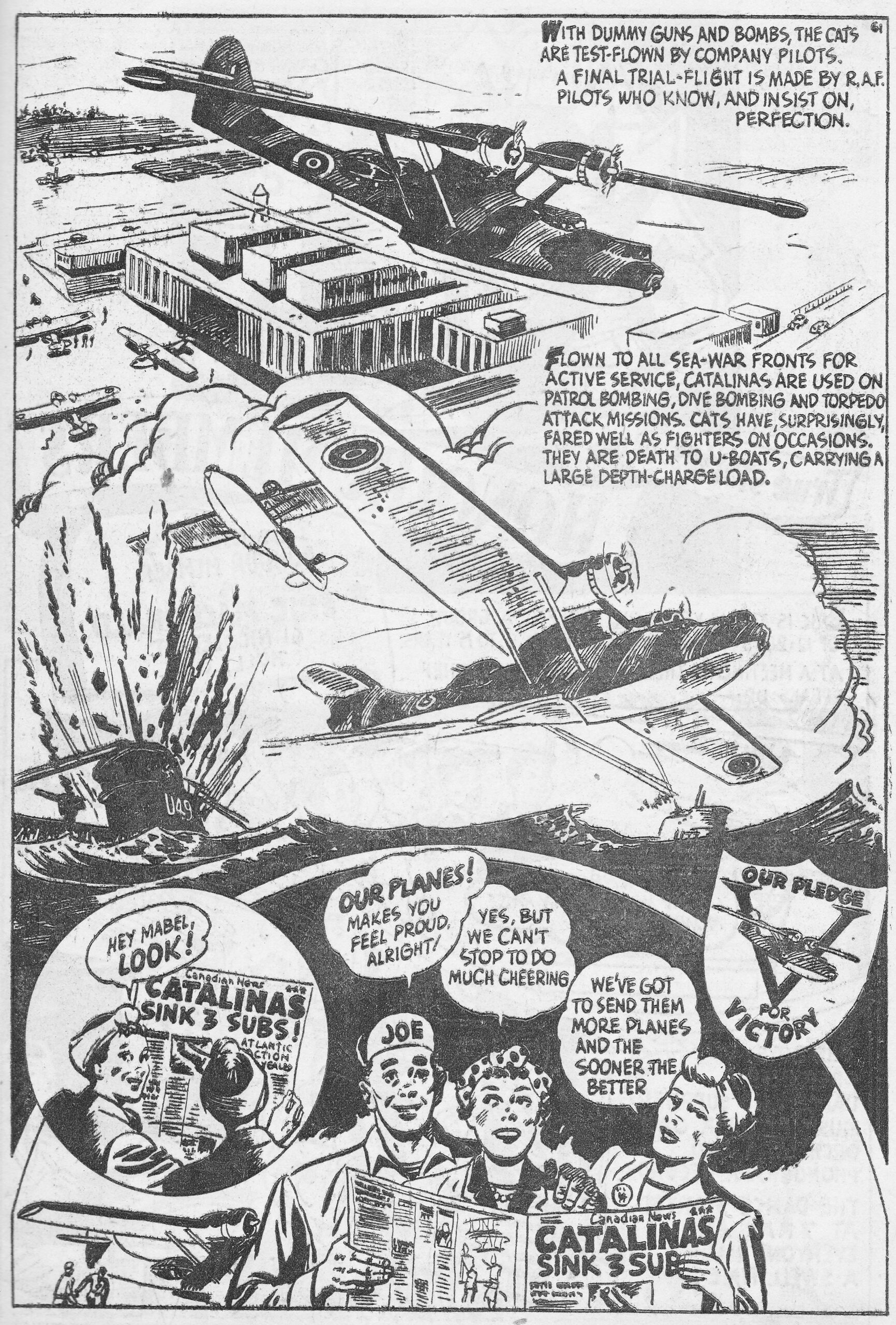 Canadian Heroes, 3-1, Nov./Dec. 1943: “We Build Catalinas: The Inside Story of How Consolidated ‘Catalina’ Flying Boats Are Constructed.”  61. 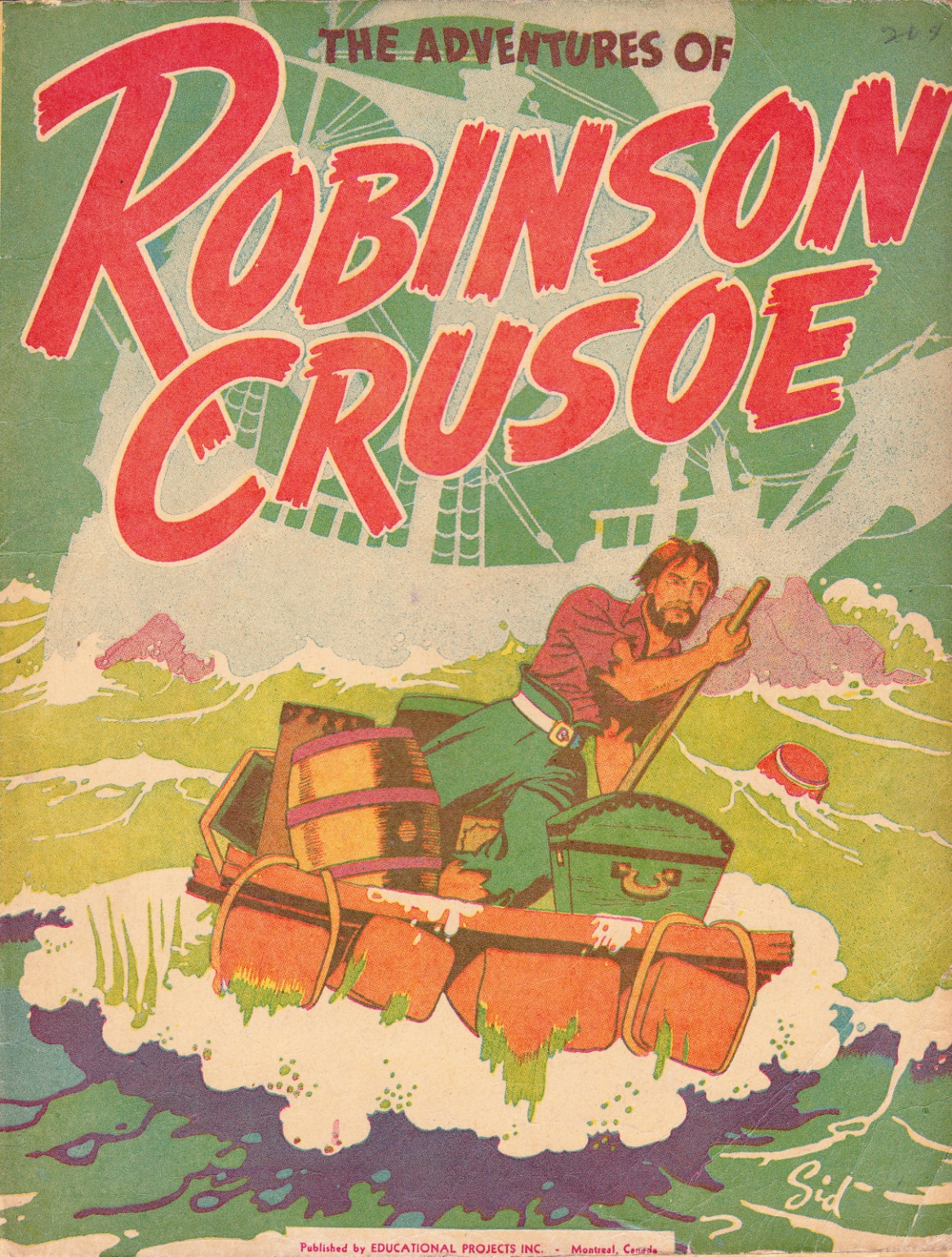 One of the colouring books illustrated by Sid Barron for Educational Projects Inc. 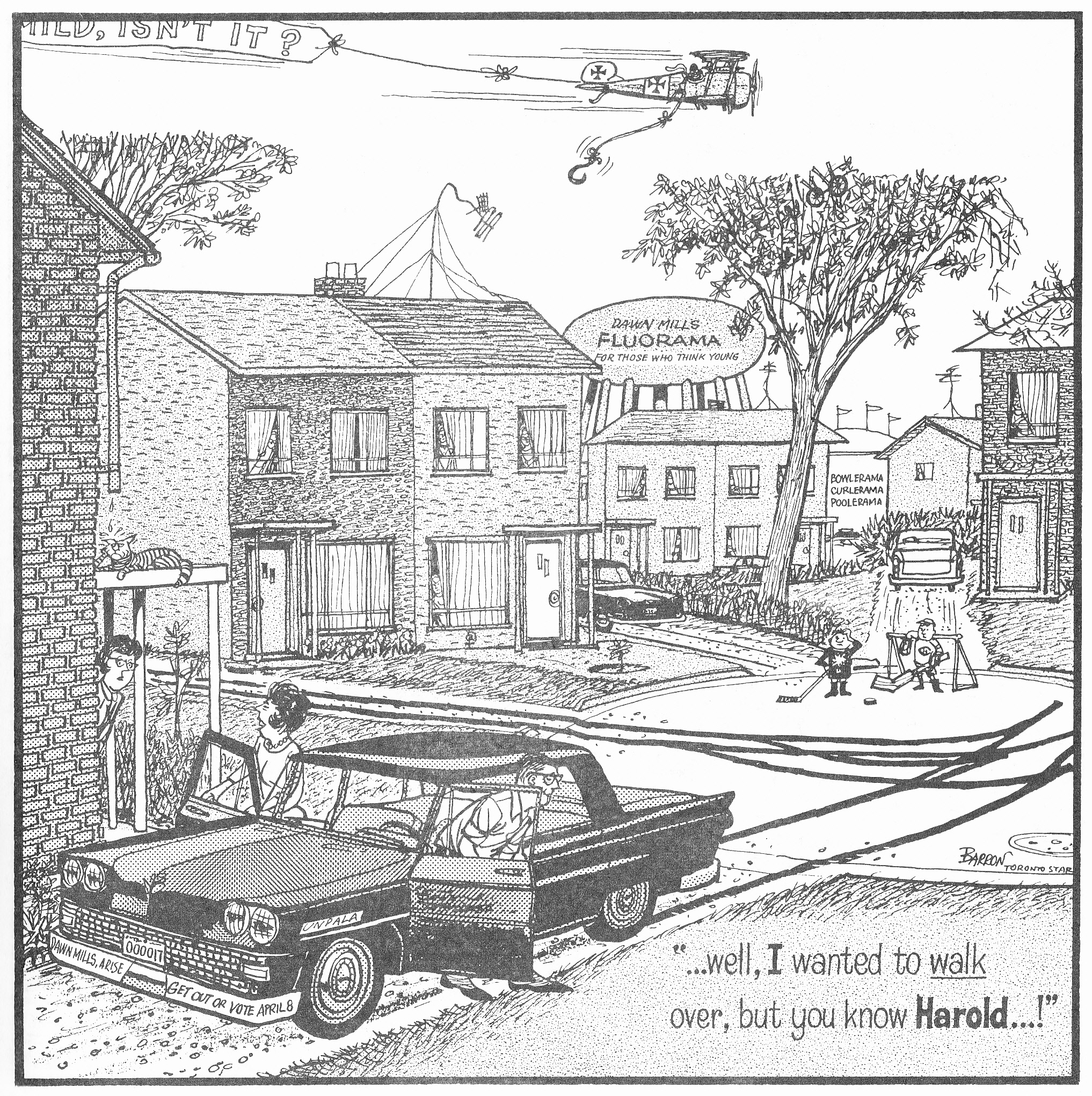 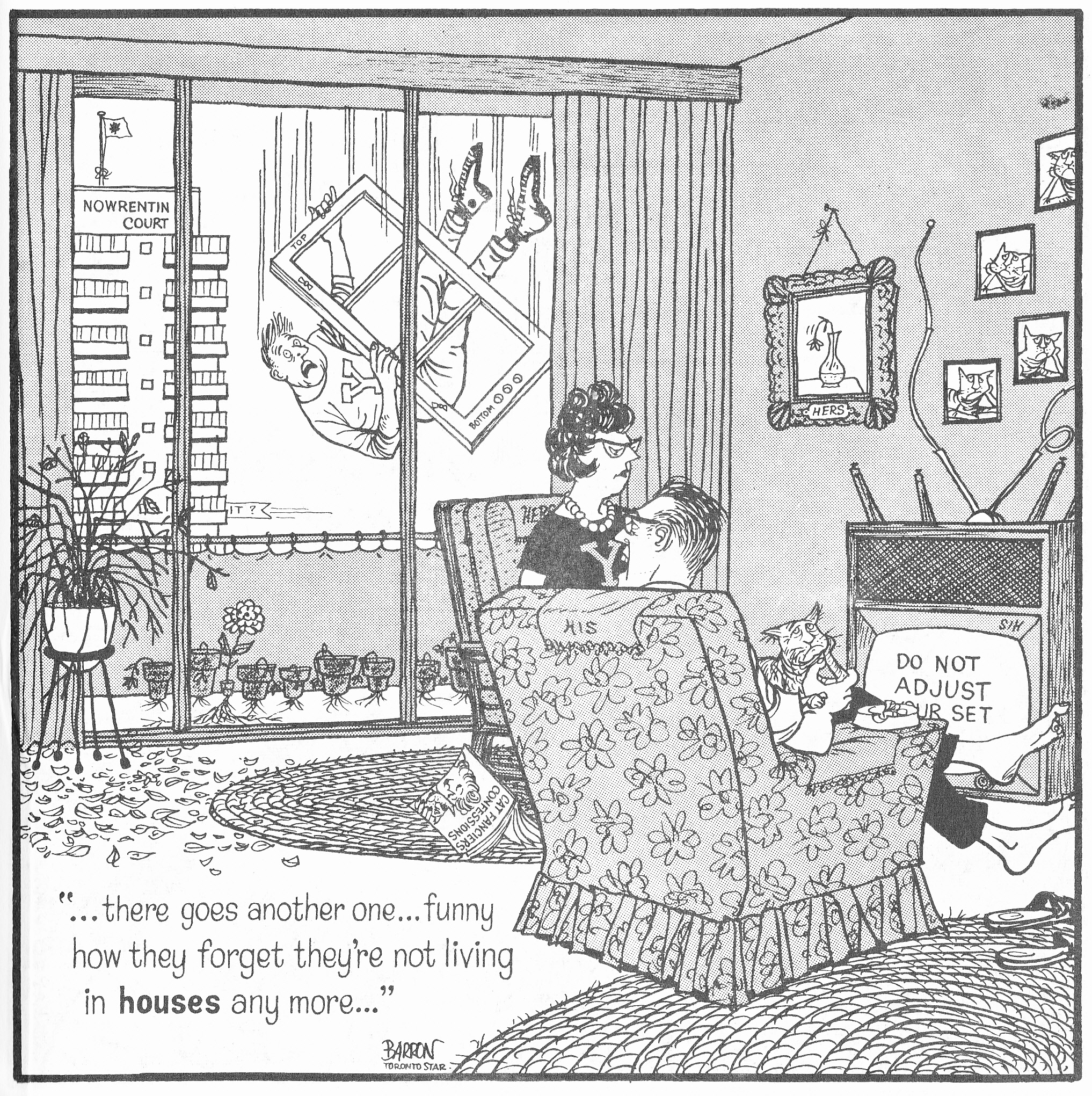 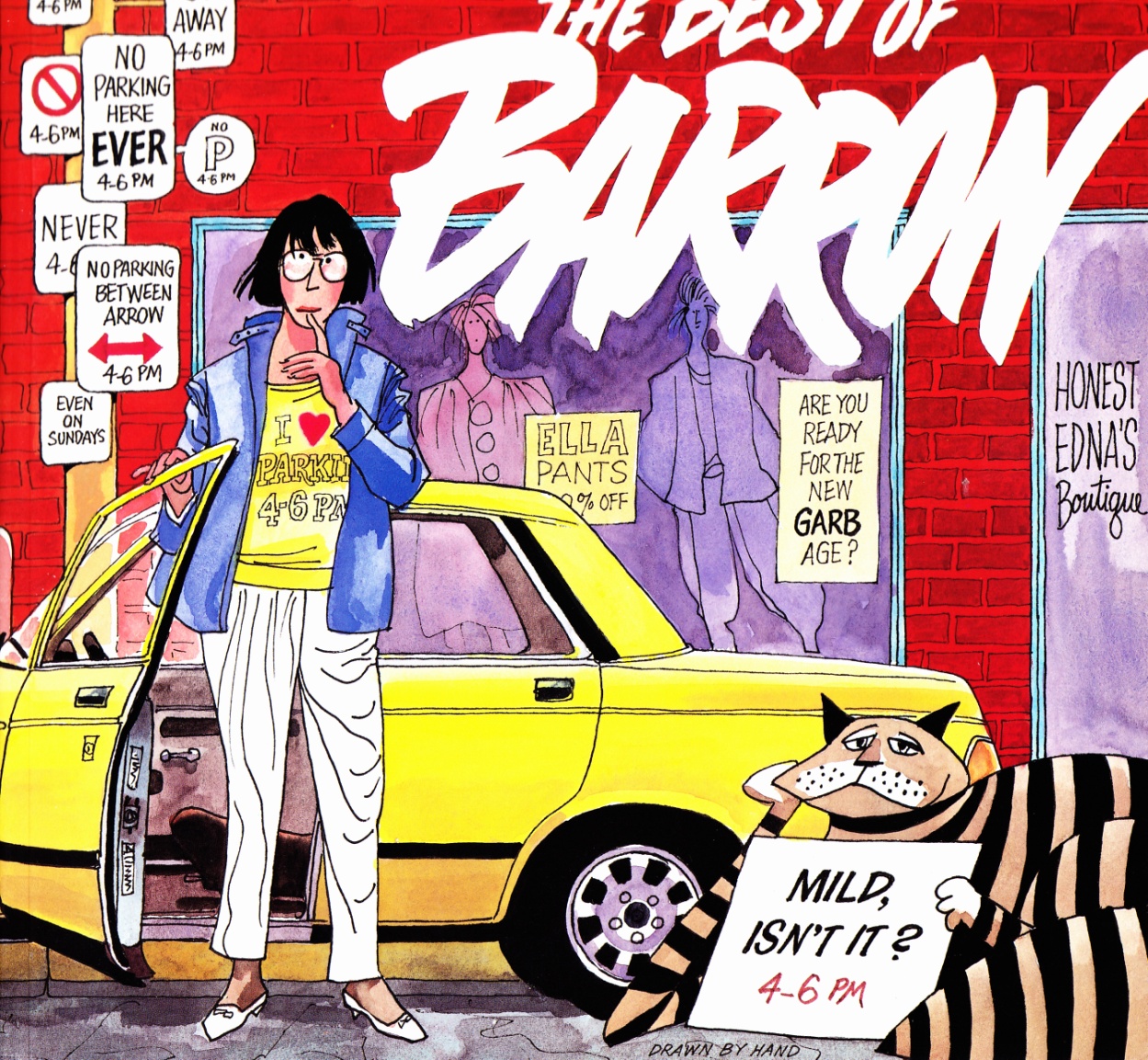